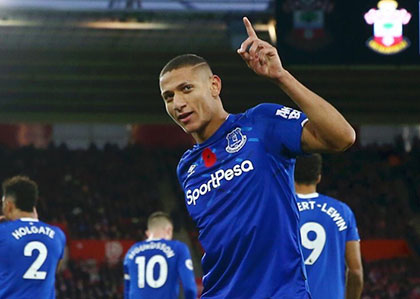 Everton won away from home for the first time since March as Richarlison got Marco Silva's side over a line against a woeful Southampton at St Mary's Stadium.

The Brazilian converted Djibril Sidibe's shot with 15 minutes to go after Danny Ings had netted against the Blues yet again to cancel out Tom Davies's early opener.

With André Gomes out and Fabian Delph missing with a hamstring strain, Silva brought Morgan Schneiderlin back into the side, deployed Cenk Tosun up front and restored Gylfi Sigurdsson to the starting XI, dropping Alex Iwobi to the bench.

Anthony Gordon was named among the substitutes but there was no place in the squad for Moise Kean against a Saints outfit that lost 9-0 in their last home game.

And when Everton scored at the end of their first sustained attack just five minutes in, it looked as though it would be another difficult afternoon for Ralph Hassenhüttl. Richarlison had played Walcott in and the latter had dribbled into a cul-de-sac and Sigurdsson's shot was charged down for a corner.

Lucas Digne's delivery was headed towards the back post by Holgate where Davies arrived unmarked to head home. It was the midfielder's first goal in two years.

Though Saints briefly rallied, their vulnerabilities and lack of confidence were exposed and Everton took almost complete control of the contest but without ever looking capable of killing their hosts off.

Walcott sent Tosun in behind the home defence but his shot was blocked well by Stephens's sliding challenge and the same two Blues players combined a couple of minutes later to carve out the visitors' best chance of the remainder of the first half.

Walcott and Tosun exchanged passes with the winger chipping the ball to the back post but the Turk's header was poor when he should have hit the target and he despatched it high over the crossbar instead.

Four minutes later after Walcott was fouled by Vestergaard, Sigurdsson whipped a dangerous ball between the defence and goalkeeper but it was inches too far ahead of Yerry Mina in the middle.

Walcott forced Alex McCarthy into beating away a cross from the right and Davies's sliced cross almost drifted into the top corner before the keeper tipped it over while Digne scooped an effort over just past the half-hour mark.

Everton's failure to put Southampton to the sword in the first period looked like it might come back to haunt them as the home team came out from the half-time interval with their tails up a bit more.

And when Moussa Djenepo was fouled by Sidibé and the resulting free kick was cleared, substitute Sofiane Boufal had Saints' first shot on target with an attempted curler from 25 yards that was comfortably caught by Jordan Pickford.

Boufal was the architect of the equaliser shortly afterwards, however, as Hasenhüttl's side won back-to-back corners, the second of which was headed clear by Yerry Mina but only as far as an opposition and when Boufal powered past Schneiderlin along the byline and crossed hard and low, Ings has the simple task of tapping the deflected ball home from close range.

Rather than buckle, Everton continued to fashion opportunities at the other end and after Richarlison's initial cross was blocked, the Brazilian laid the ball back to Sigurdsson on the edge of the box but Alex McCarthy pushed it over the bar.

In general, though, the visitors suffered from poor execution in the final third with Tosun screwing a shot across the face of goal with three blue shirts arriving in the middle waiting for the square pass.

Meanwhile, after Mina had escaped punishment for overly aggressive contact on Djenepo as he shielded the ball behind for a goal kick, Pickford was called upon to make an excellent save to deny James Ward-Prowse's direct free kick.

Then, after Digne's bouncing throw-in had been nodded onto the roof of the net by Mason Holgate, Everton made the breakthrough that would end up winning the match.

Iwobi, who had come on as part of a double change that saw Theo Walcott and Tosun depart and Dominic Calvert-Lewin also enter the fray, threaded Sidibe' down the right flank with a nicely-weighted pass and the Frenchman's cross was met superbly with a first-time finish by Richarlison.

Iwobi himself went close to doubling the Blues' advantage when his shot on the turn deflected just wide before his volleyed cross was deflected onto the outside of the post and the Nigerian also picked out Calvert-Lewin with an excellent pass late on but Jannik Vestergaard recovered well to block the shot behind.

Michael Keane came on late to replace Richarlison and shore up the back line and Silva's charges were able to see out a victory that lifts them six points clear of the bottom three and into a healthier position heading into the international break.