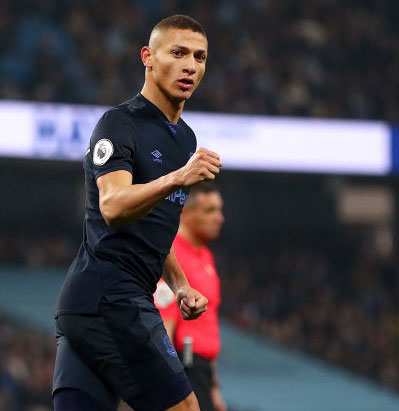 Carlo Ancelotti tasted defeat for the first time as Everton manager as his tired-looking charges succumbed to the reigning champions at the Etihad Stadium.

A tedious, goalless first half that had been punctuated by a couple of lengthy Video Assistant Referee reviews that chalked off Phil Foden's goal for offside and denied Manchester City a penalty when Riyad Mahrez went down in the box was followed by a goal for the home side by Gabriel Jesus early in the second period.

The Brazilian scored his seventh goal against the Toffees in just five games seven minutes later as Everton's defence melted away again but a goal by Richarlison with 19 minutes left sparked a late but fruitless rally by the visitors.

Ancelotti had planned on reverting to the team that had started against Burnley on Boxing Day but a bizarre injury to Bernard inflicted by Yerry Mina in the warm-up forced a late change that saw Tom Davies drafted into the side.

The young midfielder looked lost for much of the contest but he was not alone as the Blues toiled with almost no effectiveness and it seemed inevitable when Foden converted in the 13th minute. VAR flagged an offside in the build-up, however, and play was brought back for a free-kick to Everton.

Taking advantage of the space afforded them, City carved open a number of chances to take the lead but Jordan Pickford parried away one effort with half an hour gone, Jesus sliced off target when well placed, Mahrez dragged a gilt-edged chance wide and Mahrez squandered another chance late in the half as Everton struggled to put anything together going forward themselves.

City did make the breakthrough in fairly predictable fashion six minutes after half-time. Everton's defence was carved open by Ilkay Gundogan who picked out Jesus and he cut back inside his marker before curling a shot into the top corner that Pickford couldn't keep out despite getting a glove on it.

Jesus doubled his account when Mahrez slipped Jesus in with a simple pass and the striker rifled a shot inside the near post to make it 2-0.

Ancelotti introduced Theo Walcott for Seamus Coleman and Moise Kean for the ineffective Gylfi Sigurdsson and it was some overdue pressure on the home side's defence that yielded a lifeline for Everton. Richarlison got a toe on Claudio Bravo's passed out of his box, Kean dribbled into the box and forced a slide tackle from Rodri that Walcott fizzed across the box and Richarlison converted at the back stick.

While it offered Everton hope, they failed to unduly trouble Bravo again. Instead, it was Pickford who was called upon to keep the score down as he saved two more headers from Jesus while the City man also hit the woodwork again with a shot from close range.