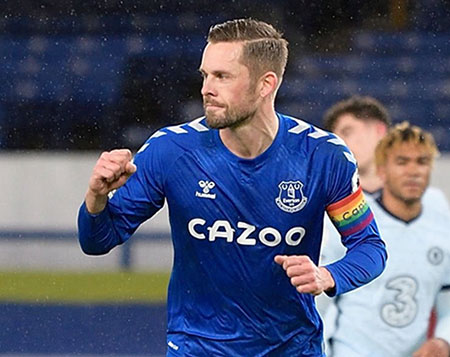 Gylfi Sigurdsson turned in a captain's performance, scoring the game's only goal from the penalty spot and leading the press as Everton frustrated Chelsea

Everton brought an end to Chelsea's nine-game unbeaten run in the Premier League with an obdurate display in front of the first 2,000 fans allowed back into Goodison Park since March.

Gylfi Sigurdsson stroked home the only goal of the game from the penalty spot after Dominic Calvert-Lewin had smartly drawn a foul from goalkeeper Eduard Mendy and the Toffees successfully frustrated Frank Lampard's men with an impressively dogged defensive performance.

With both his first-choice full-backs out injured, Carlo Ancelotti elected to string four centre-halves across the back, with Ben Godfrey reprising his role at left-back and Mason Holgate filling in at right-back, with Michael Keane and Yerry Mina in the centre.

Alex Iwobi replaced James Rodriguez wide on the right but it was from the left that the first real chance of the game came in the sixth minute when Richarlison played a one-two with Sigurdsson and produced a disappointingly weak finish that Mendy easily saved.

The breakthrough came in the 21st minute when Jordan Pickford launched a ball forward that Calvert-Lewin nodded to the side and then went to collect his own knock-down when he was pole-axed by Mendy and referee Jon Moss pointed to the spot.

Sigurdsson stepped up to send the keeper the wrong way and roll the resulting penalty into the other side of the goal, handing the home side a platform for the rest of the game.

Chelsea, who came into the game as strong favourites, demonstrated their attacking qualities as they tried to respond straight away in search of a win that would have taken them back to the top of the Premier League.

Pickford had to be alert to push away Reece James's 24th-minute free-kick and got enough of a touch on a fierce drive from the same player a minute later to turn it onto the inside of the post and away to safety after the ball had flashed across the face of goal.

Olivier Giroud's header down gave Kurt Zouma a great chance two minutes after that but the former Everton defender fired straight at Pickford and Timo Werner blazed well over the bar. Richarlison tested Mendy again shortly before the interval after being played in by Sigurdsson.

Everton's good work was nearly undone a couple of minutes after half-time when Pickford's punch only made it as far as Ngolo Kanté who knocked it to Mason Mount and the midfielder's attempt to lob it in bounced off the top of the bar.

Ancelotti's side then counter-attacked a few minutes later and Mendy had to push another Richarlison shot aside and from the resulting corner, Mina planted a header off target.

Sigurdsson whipped a direct free-kick just over and Calvert-Lewin thought he had won a second penalty just past the hour mark only for the decision to be over-turned by a VAR ruling for offside.

The visitors were dominating possession but were increasingly running out of ideas, although a clumsy free-kick conceded by Abdoulaye Doucouré gave Mount a chance to beat his international team-mate from just outside the box but his set-piece shot came off the base of the post with Pickford beaten.

That would be Chelsea's last chance as Everton, tiring but bolstered by the introductions of André Gomes, Tom Davies and Jonjoe Kenny in the closing stages, put up a blue wall to keep the Londoners at bay and win at home for the first time since 3 October, secure their first clean sheet in the Premier League since the opening day, and draw within two points of their highly fancied opponents on the day.