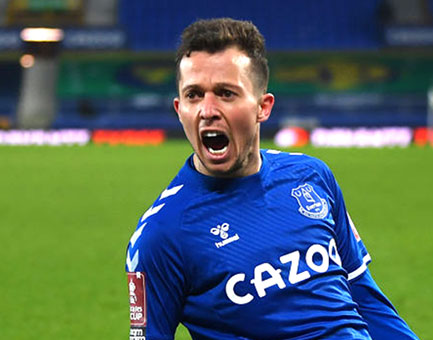 Everton dragged themselves into the last eight of the FA Cup with a gutsy if defensively suspect display in a back-and-forth, goal-laden tie against Spurs at Goodison Park thanks to a dramatic extra-time winner.

The Blues recovered from an awful start that saw them concede with less than four minutes on the clock to lead 3-1 heading into half-time but then let the visitors in in the third minute of first-half stoppage time to halve the lead.

Jose Mourinho's men pulled it level at 3-3, equalised again to make it 4-4 seven minutes from the end of the 90 to force extra time but were undone by a brilliant winner fashioned by Gylfi Sigurdsson and finished with aplomb by Bernard.

With James Rodriguez ruled out with a calf injury, Sigurdsson came into the side and Alex Iwobi started wide on the right while Yerry Mina replaced Mason Holgate and Ben Godfrey switched to right back.

However, it was Spurs who came out of the traps with more purpose and within a minute of the first whistle they had forced the first of quite a few saves demanded of Robin Olsen who was once again in goal with Jordan Pickford still nursing a rib injury.

The Swede dived to his right to palm aside a header from Eric Lamela off a Steven Bergwijn cross but he was left helpless three minutes later as Everton's zonal marking system utterly failed and Davinson Sanchez was allowed to rise unchallenged and nod home a corner from the Tottenham left.

Godfrey forced the first save of the evening from Hugo Lloris with a low drive from distance and the French keeper tipped a Dominic Calvert-Lewin effort onto the post as the home side started to find their attacking belief but it was Olsen who was kept the busier, parrying a powerful shot from Son Hueng-Min over his crossbar and then stopping Lamela's effort from distance after Mina had given the ball away with a poor header.

Another Son shot was deflected into Bergwijn's path but Olsen got behind it again while the South Korean's next drive took a heavy deflection off Michael Keane and looped narrowly over the crossbar as Spurs continued to look the more dangerous team.

However, after Mina headed a corner wide 10 minutes before the half-time break, Everton sparked a burst of three goals in seven minutes when Dominic Calvert-Lewin hammered in his 18th of the season and 50th for the Toffees via Lloris's gloves.

A quick interchange between Iwobi and Sigurdsson on the right flank ended with the Iceland international knocking the ball into Calvert-Lewin's path and he connected beautifully as it sat up perfectly, rifling a shot that Lloris couldn't keep out to make it 1-1.

Two minutes later, Digne's headed lay-off from Sanchez's awkward header was heel-flicked neatly to Richarlison by Calvert-Lewin and the Brazilian, finally looking like his usual self, took a touch to his right before drilling through a defender's legs and into the bottom corner from 20 yards to make it 2-1.

Five minutes after that, when Hojbjerg accidentally clipped Calvert-Lewin's heels as the striker went to collect a pass inside from the left flank, referee David Coote had no hesitation in pointing to the spot and after a check by Video Assistant Referee, Chris Kavanagh, Sigurdsson stepped up to coolly roll home the resulting penalty.

That should have seen the Toffees into the interval with a two-goal cushion but an awful lapse in concentration from Mina allowed the ball to slip by him in the box and Lamela was on hand to clip it past Olsen deep into injury time.

Everton's slender 3-2 lead felt more precarious when, just nine minutes into the second half, Calvert-Lewin had to be withdrawn with an apparent recurrence of his recent hamstring problem and was replaced by Seamus Coleman, a change that saw Richarlison move into a central attacking role and Iwobi switch to left midfield.

The lead would last only a couple of minutes longer and once again it was schoolboy defending at a corner from the same side as before that was the Toffees' undoing. Sigurdsson kept his attentions on Sanchez and not the ball which mean that when the set-piece was flicked on to the back post, it was the Colombian who tracked it and, holding off the Everton man, stuck out as leg to stab it home and level things up at 3-3.

If there was a sense that the pendulum had swung in the direction of Spurs, Richarlison would ensure that the next blow was landed by the hosts. Sigurdsson played him in nicely between the lines and the Brazil international powered past his man before lashing a superb left-footed shot across the keeper and in off the far post from a tight angle.

Carlo Ancelotti replaced Iwobi with Bernard immediately afterwards and, predictably, it was Tottenham who pressed as the game moved into the final minutes of normal time and they kept exposing Everton's weaknesses from set-pieces.

Olsen punched one dead-ball delivery straight to Lamela but the Argentine couldn't keep his shot down and it flew over. At the other end, Bernard put the ball on a platter for Keane in front of goal but the defender could only steer his shot into Lloris's arms.

With 82 minutes gone, however, Everton's defence was breached again following yet another corner. Olsen's glancing fist on the ball ended up with Lamela again, his shot was headed off the line by Abdoulaye Doucouré but when Son collected the loose ball on the far side and was allowed to bend a cross to the back post, substitute Harry Kane was there unmarked to head in from close range.

Once more, with their deeper bench and their tails up at having made it 4-4 to force extra-time, Spurs might have felt the momentum was with them. And they came close to making it 5-4 five minutes into the first half when Kane cut in off the byline and fired from close range but he scuffed his shot enough that Olsen was able to bounce on it.

Two minutes later, Everton grabbed the deciding goal that finally broke Spurs's resilience and was one worthy of settling any tie. Bernard played a ball inside to Sigurdsson, he controlled it and then chipped deftly over the defence for the little Brazilian to track and then half-volley sweetly past Lloris with his left foot.

The Blues still found the energy to come close to padding their lead in the first minute of the second period of extra-time when Sigurdsson and Richarlison raced away on the counter-attack but the former ignored the latter and the goalkeeper beat away his shot.

Keane then dropped a header off a free-kick wide before Tottenham's last, desperate attacks yielded a direct free-kick for Kane that came back off the defensive wall and a couple of corners that were much better defended before the referee called time on an exhausting but victorious contest for Ancelotti's players.