Richarlison on the mark again as Everton battle past Allardyce's Baggies 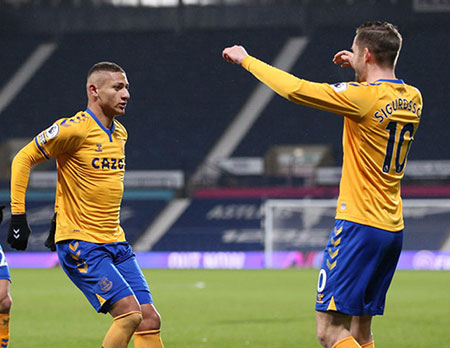 Everton recorded a third straight victory and clean sheet to match in another narrow, hard-fought game in which a Richarlison goal proved decisive.

The Brazilian headed home his six goal in as many matches in all competitions midway through the second half of a contest that was short on entertainment and yet produced drama in stoppage time when Mbaye Diagne thought he had rescued a point only for his goal to be ruled out for offside.

This was the first time Sam Allardyce had come up against his former club and his new charges seemed determined to prove a point on his behalf with an enterprising opening that almost saw Diagne head them into a second-minute lead. The striker rose to guide a header towards the top corner but Jordan Pickford pawed the effort away brilliantly.

The Senegalese striker had another chance in 17th minute after André Gomes had become the latest Everton player to give the ball away in what was a sloppy opening from Carlo Ancelotti's side but, thankfully, he hooked the ball over the bar.

The Toffees finally settled around the midway point in the first half and when Dominic Calvert-Lewin chested the ball off to Richarlison, the latter forced the first same from Sam Johnstone with a heavily deflected shot that was routine to gather.

Ben Godfrey, starting in a back three alongside Michael Keane and Mason Holgate, had a shot of his own deflected wide after a rampaging run from the back before a nice move involving Bernard and Calvert-Lewin ended with Richarlison's shot being blocked and sent spinning onto the roof of the net.

The best chance of the half came eight minutes before half-time, though, when a ricochet landed fortunately for Calvert-Lewin but having seized on the loose ball, he could only shoot straight at Johnstone who stopped the effort with his leg.

Richarlison then had the last chance before interval when the keeper comfortably saved his scuffed shot from just inside the penalty area.

As they had done the first, West Brom started the second half in the ascendency with three early chances, the first for Matheus Pereira was saved low by Pickford, the second was squandered by Diagne when he nodded Darnell Furlong's flick-on over from close range and the third was when Conor Gallagher flashed a shot dangerously across the face of goal from the angle.

Everton were struggling for tempo and fluidity and it wasn't until the disappointing Alex Iwobi and the possibly injured or just exhausted Abdoulaye Doucouré came off for Allan and Gylfi Sigurdsson respectively that they made the decisive breakthrough, albeit via a set-piece.

Sigurdsson's 65th-minute corner was cleared back to him by Diagne and the Icelandic international had time to curl a beautiful cross back into the six-yard box where Richarlison powered home a header.

A later chance for Calvert-Lewin provided by Lucas Digne from the left that the striker scooped over was really the only other opportunity that the Blues carved out as they dug in to resist a late assault from Allardyce's team that looked as though it would be fruitless until Diagne controlled a cross from the right and lashed the ball in in the dying moments.

Thankfully for Everton, the referee's assistant had spotted that the forward was offside and a check by Video Assistant Referee, Michael Oliver, confirmed that Diagne's foot was ahead of the last defender and Everton escaped with all three points.

The victory they ground out, their seventh away from home in nine matches, moves the Blues into fourth places, perhaps only temporarily depending on the outcome of the match at Anfield between Liverpool and Chelsea, but they are just five points off second place with a game in hand.