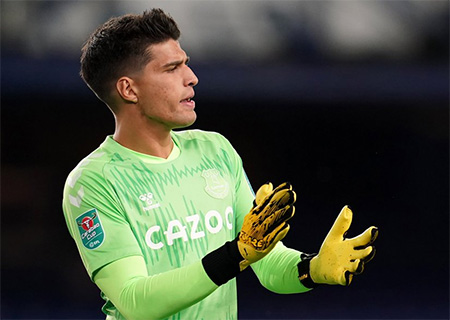 Everton made an all-too predictable exit from the FA Cup at the quarter-final stage, holding off the Manchester City juggernaut until late on when the strength and depth available to Pep Guardiola proved decisive.

The Toffees' policy of containment had kept the champions-elect at bay for 84 minutes but they were undone once Riyad Mahrez and Kevin de Bruyne had been introduced as second-half substitutes and Ilkay Gundogan broke the deadlock in fortuitous fashion.

De Bruyne then finished the game off in the 90th minute as Everton were caught desperately trying to fashion an equaliser.

Taking a similar approach to the Premier League encounter between these two sides at Goodison Park last month, Carlo Ancelotti deployed a five-man defence with Seamus Coleman and Lucas Digne as wing-backs either side of a back three of Mason Holgate, Yerry Mina and Ben Godfrey.

The visitors had the lion's share of the possession and fashioned the early chances, with Phil Foden's attempted drive deflected off Mina's head for a corner in the second minute and stand-in goalkeeper Joao Virginia doing his confidence no harm with a low save from Raheem Sterling.

Everton's first chance came in the 19th minute and fell to Richarlison but he could only hook Godfrey's down-ward header over the crossbar. Mina, meanwhile, forced Zinchenko into heading away from his goal line following Digne's corner before Foden saw another effort deflected over after a quick counter-attacking move led by Bernardo Silva.

The pattern of precious few chances continued into the second half when the ball dropped to Richarlison again from a Gylfi Sigurdsson free-kick but he half-volleyed wide while at the other end, Virginia pulled off a wonderful finger-tip save to deny Sterling after the ball had been cut back to him by Fernandinho in the 58th minute.

Mahrez found Foden eight minutes later and his shot flashed wide while André Gomes sent a half-volley drifting past the post two minutes after that.

It took De Bruyne's introduction and the space afforded to Aymeric Laporte to open the tie up in the final 10 minutes. The centre-half powered towards the Everton box and found De Bruyne who went down on the 18-yard line but play was allowed to continue. Laporte's shot came back off the crossbar via Virginia's fingers and the ball fell to the unmarked Gundogan who stooped to head into the empty goal.

Six minutes later with the Blues short-handed at the back after Alex Iwobi had been thrown in place of Holgate, De Bruyne was put in behind the defence where he evaded Godfrey's frantic attempt to get back and fired past Virginia to settle matters.