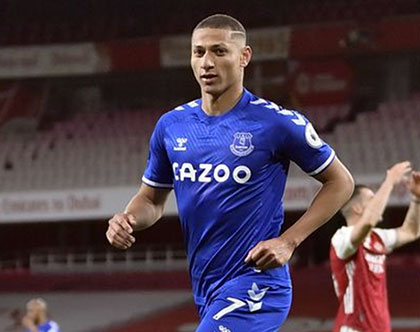 Everton won at Arsenal for the first time in 25 years to move back into European contention but it took a dreadful error by Bernd Leno and a terrific save by Jordan Pickford to push them over the line after another bafflingly lethargic performance.

The game had settled into an increasingly frustrating stalemate with a quarter of an hour to go when Richarlison's low cross squirmed through the keeper's legs and in to provide the platform from which Carlo Ancelotti's side were able to grind out a first win in six matches.

While Mikel Arteta was shorn of his two best strikers in the form of the injured Pierre-Emerick Aubameyang and Alexandre Lacazette as well as first-choice left-back Kieran Tierney, the Toffees welcomed Dominic Calvert-Lewin back up front while André Gomes returned in midfield for what was the 200th top-flight meeting between these two clubs.

Yerry Mina and Fabian Delph were named among the substitutes and Seamus Coleman started at right-back as Ancelotti reverted to 4-4-1-1/4-3-3 formation but despite the commotion of thousands of fans protesting their club's ownership outside, Arsenal began purposefully enough and had the first shot on target of the contest.

Calvert-Lewin connected with an early Lucas Digne cross but headed a difficult chance well wide and another whipped Digne centre required quick reactions from Leno as it deflected heavily off Rob Holding before Bakayo Saka tested Pickford with a low shot from just inside the penalty area.

The best chances of the first half fell Everton's way, though, and Leno did well with a one-handed save to deny Richarlison after the Brazilian had turned inside his man and unloaded a quick shot on his left foot in the 29th minute.

11 minutes after that, Thomas Partey felled Richarlison outside the box and Gylfi Sigurdsson stepped up and rattled a free-kick off the top of the crossbar.

The game was goalless at the break but was almost broken open inside the first seven minutes of the restart. First Everton put together arguably their best move of the match to fashion a similar chance to their second goal against Tottenham a week ago but Sigurdsson's side-foot shot from Coleman's cross was from closer range and deflected behind off a defender.

Then, at the other end, Dani Ceballos went down clutching his shin following the merest of contact from Mason Holgate but, true to form, Referee Jon Moss awarded a penalty, a decision backed up by Video Assistant Ref, David Coote. However, a hairline VAR check for offside determined that Nicolas Pépé had been fractionally ahead of the last defender and play resumed with a free-kick to Everton.

The let-off failed to spark the Blues back into life. With James Rodriguez having a curiously terrible evening by his standards, the visitors struggling to get out of their own half without long punts forward by Pickford for long stretches.

Emile Smith Rowe's drilled cross/shot from the right almost ricocheted in off Holgate but flashed into the side-netting, Callum Chambers bounced a half-volley over the crossbar following an Arsenal set-piece and Ceballos warmed Pickford's hands with a driven effort from 20 yards that the keeper pushed away to safety.

The deciding goal was perhaps fitting for such a lacklustre contest. Richarlison deserved credit for turning makeshift full-back Granit Xhaka and then driving to the byline before attempting to fire the ball across goal for Calvert-Lewin but it went through Leno's gloves and in off his heel instead.

The goal survived a check by VAR and that was Ancelotti's cue to shut up shop. Having earlier replaced the ineffective Gomes with the equally bland Delph, he withdrew James and Richarlison in the closing stages in favour of Tom Davies and Mina.

Arsenal would get one last chance to claim a point in injury time for the second week running but Gabriel Martinelli was foiled by a great one-handed stop by Pickford that preserved an important victory, Everton's first ever at the Emirates that represented their first double over the Gunners since 1986 and pulls them to within three points of the top four again.