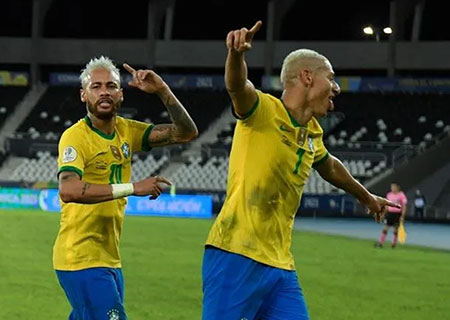 Richarlison came on at half-time and ended with the game with an assist and a goal as Copa America hosts Brazil beat Peru 4-0 to remain top of Group A.

After starting the first game of the tournament, the Everton forward started this one on the bench, with Everton Soares preferred out wide and Gabriel Jesus and Gabigol up front alongside Neymar.

The hosts went ahead after quarter of an hour when fullback Alessandro converted in front of goal following a set-piece.

Richarlison was introduced at half-time sporting platinum hair to match that of the other Brazil strikers but it was Neymar who scored the second, firing home from around 15 yards out in the 67th minute, shortly after the referee had changed his mind over the award of a penalty after watching a replay on the pitch-side monitor.

Richarlison would get in on the act late on, though, laying on a gift for Everton Ribeiro in the 89th minute before scoring himself in stoppage time, scrambling the ball home at the second attempt after the Peruvian keeper had saved from Roberto Firmino.

Earlier in the day, Colombia took on depleted Venezuela and were foiled by a man-of-the-match display from goalkeeper Wuilker Faríñez who pulled off some excellent saves to ensure it ended goalless between the South American neighbours.

Los Cafeteros had the ball in the net in the second half when Yerry Mina headed it on for Miguel Borja but the Everton defender was flagged offside.

In all fairness to Richarlison, I don't think it's so much that he doesn't want to play for us, but instead it's the really poor tactics and team selections last season that didn't do a lot for not only his stability in the team, but others' too. I think we would really miss him if he were to move on.

We could miss him but would need to replace him with better productivity and of course his work rate, which can't be faulted.

I bet all the players felt let down by Carlo. Not as much as the fans but a player should look up to a manager. Lots to do before the start of the season for Brands and the next boss. I'm guessing none of those on international duties will be involved in the pre-season tour, which makes it even harder to make as fast a start as last season. Great being a Blue.

Bob Parrington
6 Posted 18/06/2021 at 08:57:57
To be fair. Hmmm! Like other TWers, I dislike Richarlison looking miserable just about all of the time while playing for our team and yet smiling when playing for Brazil. So, let's have an expert analyse him – the what, the which, the why, the who??

Contrary to various statements, he appears unhappy at Everton. So what is the truth? If he is happy, then get him to change his body language; but, if he isn't happy, then sell him to the highest bidder and let's move on.

Robert Tressell
7 Posted 18/06/2021 at 09:01:08
Richarlison is one of only 4 players with any goal threat along with Calvert-Lewin, Rodriguez and Sigurdsson. The latter two are entering the final year of their contracts (and Rodriguez might leave this summer too, probably for free).

We need to add goal threat to this squad, not reduce it. Selling Richarlison this summer while his stock is unusually low and prices may be depressed by COVID-19 would be a bad move, in my view – unless we managed to pick up about 3 new quality attackers to compensate. That seems an unlikely scenario to me.

Graham Williams
8 Posted 18/06/2021 at 09:19:10
So, Brazil had at least two players whose first name is Everton. Perhaps we should start collecting them. Great project for Boys Pen Bill.

Colin at 3 - absolutely not. Anybody playing in front of our midfield would look grumpy. For me it's essential we keep both Richarlison and Calvert-Lewin.

IMHO, the key thing this summer is to sort the midfield out. Do that and it might not matter who the manager is.

Dave Evans
9 Posted 18/06/2021 at 09:25:52
One of our players gets a goal and assist in a prestigious tournament, for one of the worlds greatest national teams and it's a cue for people to discuss selling him?

Trevor Powell
10 Posted 18/06/2021 at 09:37:41
Well, Graham, look no further than Watford FC trainee, the wonderfully named "Sonny Blu Lo-Everton". Recently, Sonny has completed a loan spell at Wealdstone in the National Conference. Described by Watfordfc.com, "Versatile midfielder is a second-year scholar and part of the club's Under-18 team".

It appears (And not for the first time) that his lack of smiling is grounds for dumping him. And, somehow, he runs around the pitch for Brazil with a big smile on his face. Haha.

He has the EXACT same face playing for us as when playing for Brazil. All serious when running around the pitch. Happy, laughing, and smiling when he or a teammate scores.

You can't expect him to feel the same playing for a not-so-winning team... ie, us.

But this "He never looks happy, get rid", has actually got some traction the last couple years. Amongst the stupid.

Did you watch the game? That Neymar. If only.

A truly majestic side that sadly never won the World Cup but they entertained the whole world nevertheless.

Btw... Ecuador are the best side I've seen so far.