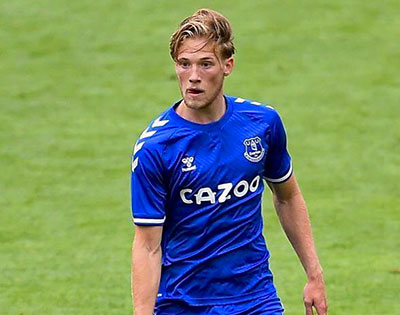 Lewis Gibson's loan spell at Sheffield Wednesday could be terminated early after the young central defender picked up another injury.

The young central defender completed a season-long switch to Hillsborough in August with the aim of finally giving him an extended run of first-team football to build up his experience.

Now a third of the way through his loan, Gibson has played just one half of football for the Owls and is out injured for what is expected to be a considerable amount of time.

Signed by Everton for their development squad from Newcastle United in the summer of 2017 for an initial fee just below £1m, Gibson consolidated his place in David Unsworth's U23s side but hasn't yet made the step up to the first team as the focus on has been on sending him out on loan to the lower divisions.

In his last loan spell with Reading, he started only 7 games over the entire season with a quadriceps injury in December keeping him out for a month.

Gibson hasn't had much more luck this time around, either, in Yorkshire. The Owls have played 17 matches so far and he has been on the subs bench just twice, playing the second half of only one game, against Bolton Wanderers earlier this month.

He picked up a muscular injury in that match with manager Darren Moore indicating that he may have to look at drafting in a replacement in January and that there has been dialogue with Everton over the defender's future.

“What I would say is he is going to be out for a little bit of time now,” Moore said.

"We will have a chat with Lewis and we are talking with Everton now in terms of where he is at and how best to deal with that situation.

Gibson has less than a year left on his Everton contract and has not played in earnest for the senior side beyond getting some game time in pre-season friendlies. He is still regarded as one for the future by the club but his inability to kick on during his loan spells leaves open the option that he could be released at the end of the summer with no residual value.

He's young. If he can recover from this latest setback, he has time to forge a career in the game. Otherwise, it could be the start of the end for him which would be a shame.

As we all develop at different rates, it may be that what was obviously a good frame for a 16- or 17-year-old, is struggling to keep up with the demands of professional sport now.

I wish him well. He was a 'star in the making' when we signed him.

Although at the Transmarkt website, it says 'Fitness' has been the issue this season.

I know we are basically only interested in Everton so tend to concentrate on or own players, but I often wonder too, are any other Clubs/Teams are that unlucky with injuries/signings/Cup Draws/Results. I suppose the latter is down to the players, and the style play dictated by the Manager, but I'm convinced other forces of a darker nature come into the equation at times ! :-)

Is it bad luck? Or are we cursed with injury prone players throughout the club? Or is it the regime? Something doesn't feel right. Can we / they really be that unlucky?

John Raftery
11 Posted 29/10/2021 at 22:40:27
Danny, similar thoughts were going through my mind. Why are players picking up so many quad injuries? They used to be rare compared with hamstring and calf strains. Is it the training or is it the pitches they are training on?
Eddie Dunn
12 Posted 29/10/2021 at 23:10:38
John, could the problem be in the gym, where these guys have specific workouts with various machines.
DCL is known for his incredible spring. Perhaps some of the work put in to achieve this puts more strain on the thighs?
The lad has bulked-up over the last 18 months or so.
I once went to a physio (who has treated the Sulyan of Brunei and the Welsh rugby team, who explained to me that the worst thing was these slight lads who bulk-up onto a flimsy frame. Ectomorph was the phrase used. Unlike myself who she kindly described as a megamorph!
Such injuries were not heard of in the 80's etc, I wonder if it is commonplace in other sports such as rugby.

Justin Doone
13 Posted 30/10/2021 at 14:16:49
Injuries can occur to anyone at any age. It's how well the body recovers that's important. Generally harder and longer the older we get. An individual has to ensure they do all they can to overcome the injury and then get back to full fitness.

I think some players are unlucky, good players but the body simply can't take the punishment at the elite level. Others don't help themselves, are badly advised, rush back, don't look after themselves well enough, poor lifestyle etc.

Most 18-year-olds may have finished growing, but over the next 5 years, they gain strength and weight. Pushing them to be elite level athletes can literally make or break them.

Delph has been an injury-prone player for the last 4 plus seasons. At his age I never expected him to play consistently and he was a bad buy. I would guess a combination of body and mind eventually let him down.

Gbamin's initial injury was probably bad luck. But I'm not sure he's now doing all he can to be the best he can be. Late night partying etc. He still has time but imo we should sell and buy a quality proven midfield general.

No more risky big money buys on potential or over 30s. I'm not ageist but I would like a player who we can hopefully be relied upon for the next 5 years to bring some quality and stability to our midfield.

Justin #13: how do you know Lewis has been partying late night?

I have thought for years that there is far too much emphasis on developing strength over flex ability. We train our players to be bulldogs when we might just be better off training them to be greyhounds. Or perhaps every player should be treated separately according to their frame and position.

Whatever it is, whoever has been responsible for our training program has done a disastrously terrible job because, in the last 5 years, we constantly have around £200 million worth of players injured at any given time.

I am not giving much credence to anything Ronald Koeman ever said but he did say as he started his first season here that that players are only about 70% fit and that is still shocking.