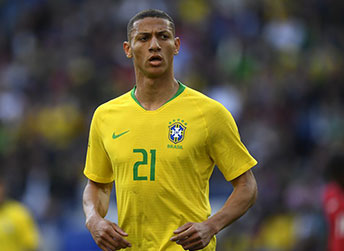 In what will come as a boost to Everton's prospects, Richarlison has been left out of the latest Brazil squad in the interests of managing and rebuilding his fitness.

The 24-year-old missed the previous international break because of a knee injury sustained in the Blues' win over Burnley in September but it also afforded him a welcome rest after a near-constant footballing schedule dating back to the start of last season.

Richarlison went straight into Brazil's preparations for the Copa America at the end of the 2020-21 Premier League season and then travelled to Tokyo for the Olympics where he helped the Seleçao to a gold-medal triumph.

Though he missed all of pre-season training, he flew back from the Far East and played in Everton's season-opener against Southampton and duly scored the Toffees' first goal of the campaign.

Still not deemed 100% fit following his knee problem, Brazil boss, Tite, will not risk over-working him this month and he will remain on Merseyside to prepare for the Blues' trip to Manchester City on 21st November.

“He's one of a number of athletes who are important and who, at the moment, you make a choice for those games,” Tite told Globo Esporte. “He returned to training with the group on 10/18; his minutes is (sic) still small.

"This is also a factor that makes us believe that he needs a little more playing time for him to improve his physical condition.”


Minik Hansen
1 Posted 31/10/2021 at 01:32:58
Great news! Plus it'll be less risky with the Covid situation, so he's more likely to be involved in the game against Man City. I hope Richarlison himself takes this omission easily, and can prepare for the next international break he'll be called up upon.
Derek Knox
2 Posted 31/10/2021 at 03:29:29
I know they say lightning never trikes twice in the same place, but Crystal Palace beating Man City at The Etihad does certainly offer a glimmer of hope and optimism if we go about the game with the right attitude and not playing useless players like Rondon and Iwobi.

Richarlison could have a field day!

If it's any consolation, I've been struck by lightning twice and lived to tell the tale – albeit with some burnt shoes and weird scold marks that marked out my skeleton. Seriously. The second time was worse.

Lee Trevino used to say that when there was lightning about he would play every shot with his 2-iron as he believed even God couldn't hit a 2-iron.

Very pleased Richarlison is being given a chance to recover back to 100%. There seems to be a good working relationship between the Brazil setup and Everton.

Similarly, I think a bit more understanding has to be used by Colombia regarding Yerry Mina. Was it three games in 8 days he played for them recently? It is damaging for them and for us, in the future a better balance has to be struck to keep Yerry fit and healthy.