Tom Griffiths: The Player with More than one String to his Bow

T.P. Griffiths may have understandably been overshadowed at Everton by his countryman and fellow centre-half T.G. Jones but he enjoyed a distinguished career with some of the greatest clubs in the land

Before Everton had T.G, there was T.P. On 16 March 1938, Tommy G. Jones (popularly known by his initials, T.G.) was sitting nervously in the changing room at the Racecourse Ground, about to make his debut for Wales. The 20-year-old was approached by his boyhood hero, Tom Griffiths, who was acting as an unofficial advisor to the squad. The older man gave the rookie a few quiet words of advice and encouragement’. Jones would later enthuse: ‘What a thrill those few words gave me. I’ll never forget it. I’ll always look back on the game with pleasure, because of the Griffiths touch.’ 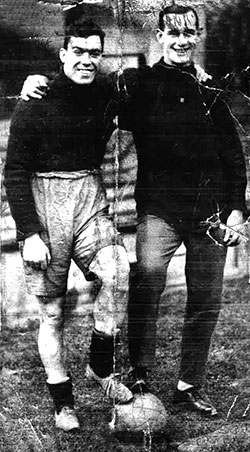 Tom Griffiths and Dixie Dean circa 1927

Thomas Percival Griffiths was born on 2 February 1906 in Moss, near Wrexham, into a musical family. His father, David, was an accomplished pianist of concert standard whilst his brother, also called David, was a virtuoso on the violin. Tom, himself, would master a larger stringed instrument in the cello. Like his father, Tom would work at a nearby colliery, but some reports cite him also training as a cabinet maker. His talents extended to football, the teenager with the long stride impressed at centre-forward for Frith Valley in the Chums League.

He was taken to Wrexham FC as a 16-year-old and got a chance in the Robins’ first team at the age of 17, when playing at inside-forward in Division Three North at Tranmere Rovers on 24 March 1923 (a 4-0 defeat). Switched to centre-half for the reserves, he found his true calling. Tall, and long-legged, he possessed brilliant heading ability and a no-nonsense manner on the ball – his trademark pass was a sweeping clearance to the wide forwards. He was given inter-league and junior international honours (the latter against Ireland) and had a first sustained run in the Wrexham team late in the 1924/25 season.


As early as March 1926, Everton had been having the North Walian pivot watched by club directors. Manchester City and Bolton were amongst the clubs putting in calls to Robins’ Chairman Dr. Jones –but their offers were rejected, out of hand. Herbert Chapman of Arsenal was another reputed to be keeping tabs on the youngster. After further scouting missions, Everton stepped up their interest – raising an initial offer of £1500 by £250 to seal the transfer on 22 December 1926 (some reports speculated wildly that the transfer fee was nearer £2,500). It was a good week for Toffees transfer business, with Ted Critchley also joining the ranks.

Hunter Hart, the indomitable stopper, stood in the way of Tom’s to the Blues’ first team, but he got the nod over the Scot when the Merseysiders travelled to Leicester in February 1927 – and found themselves on the wrong end of a 6-2 drubbing. Reports stated that Tom had a ‘trying time’ but improved in the second period of the match. A few days later he switched from playing alongside Dean to lining up against him at The Racecourse, in his first senior outing for his country (a 3-3 draw). He’d reminisce to his grandson about having the great Dixie as a friend one week, and a foe the next. After the First Division baptism of fire at the hands of the Foxes, Tom returned to the reserves and was an onlooker as the incomparable Dean inspired the Toffees to the title in 1928. 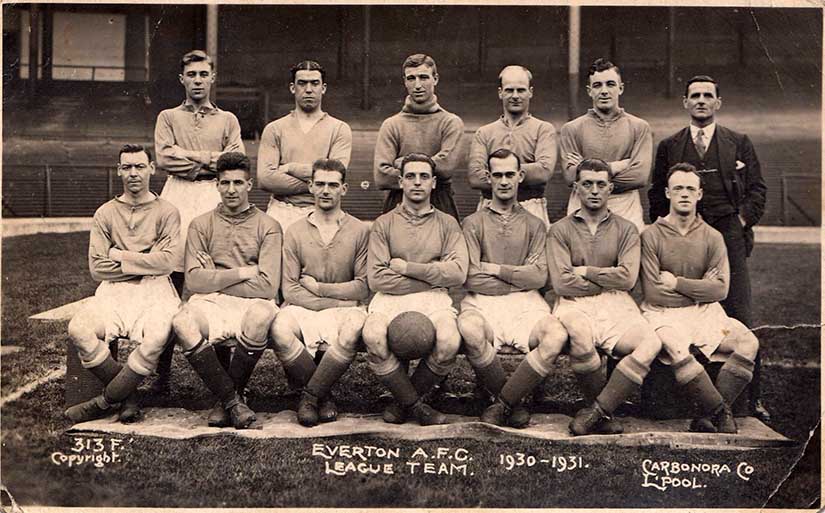 Hart’s continued excellence, and the additional challenge for a starting berth from the versatile Tom White, kept Tom restricted to Central League duties until October 1928, when he came in at wing-half before moving to across his preferred central role. He cemented his place in the first team for the relegation-doomed 1929/30 season and retained his spot when the Toffees began their attempt to climb straight back out of the Second Division. An ankle injury picked up on 27 December proved difficult to shake off, so Charlie Gee deputised. The young Stopfordian performed with such aplomb that Tom, now at his mid-twenties peak, could not force his way back into the team when fit again in mid-February. He had one more outing for the Toffees, in April 1931, as an emergency left-back.

As Christmas 1931 approached, Everton, on course for the League title, accepted a large bid of £7,000 from Bolton Wanderers. Just days later Tom was lining up in white for the Trotters, against his former club. As is the way in football, the recently-departed player inspired Bolton to a win over his former employer. The Daily Post reported: ‘Only the appearance of the braveheart Tom Griffiths seemed to hold them up and give them imaginary confidence. Griffiths had a tremendous influence on this game. He would leap high, stretch forward his neck like a swan reaching for park-food, leave away, head away, hook away, and kick away. By degrees he got Bolton to imagine they had a chance.’ 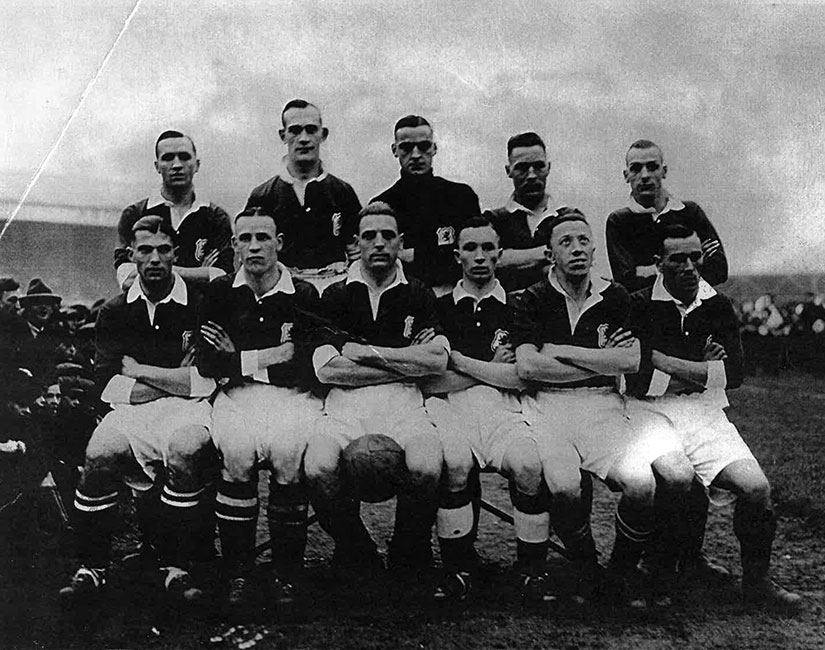 Tom with the Wales team 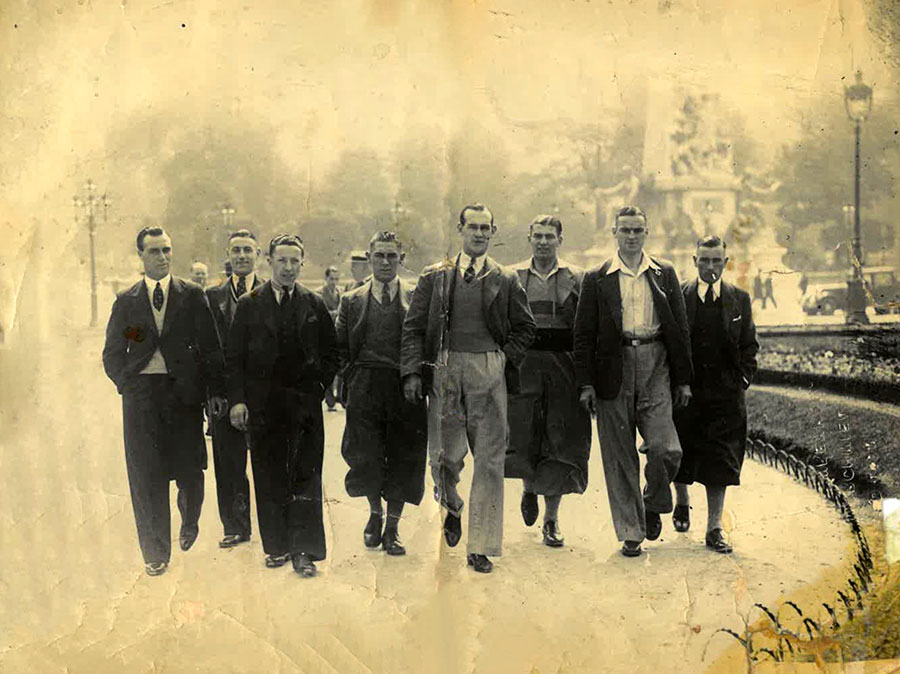 Tom and other Wales players strolling in Paris in 1933

While Tom improved his footballing game, he also worked on his musicianship. He’d give frequent recitals – notably at the ‘Football Services’ at County Road Wesleyan Church, Walton, arranged by journalist Louis T. Kelly (AKA Stud Marks), the father of Everton administrator Theo Kelly. These performances continued even after he’d left Everton, as he had maintained roots in the area. Tom’s fiancée, Elizabeth Kett, was from the Anfield area (the couple married in June 1932 and had one daughter, born in 1935).

After 16 months at Burnden Park, and 53 appearances, Tom was transferred to Middlesbrough for £6,000. In November 1935, Aston Villa acquired his services in a bid to avoid relegation (the Teesside club recouping £5,000). Sadly, as at Everton six years earlier, he could do little to stop them dropping down a division. He was frequently deployed as a right-back in the following season, but acute rheumatism prevented him from playing in the 1937/38 campaign so he carried out scouting duties. 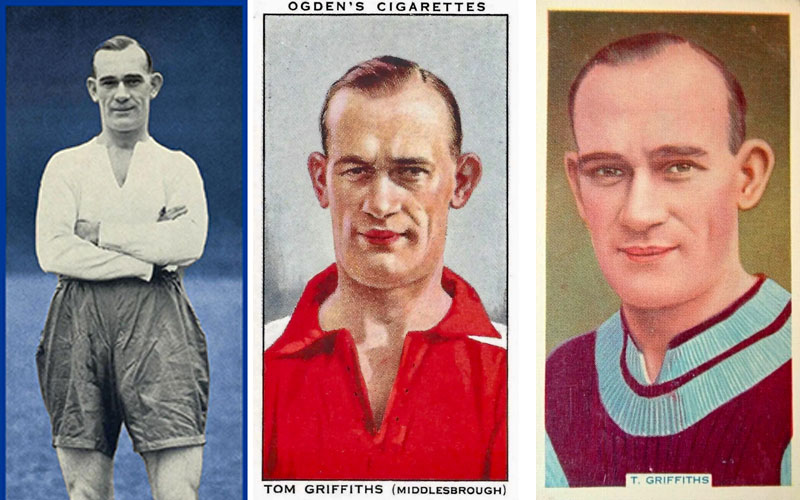 On the international front Tom racked up 21 appearances for Wales (scoring three goals). He first captained the side in the autumn of 1931, and proudly went on to do so on a frequent basis. His final selection was in March 1937, against Ireland at The Racecourse, a decade after his first selection at the same venue.

In February 1938, the rheumatism had seemingly forced Tom’s retirement and he was reportedly keen to gain employment in Liverpool, ideally working in football. However, feeling fit again, he rejoined Wrexham as a player-coach in the summer, going on to make ten appearances before the return of his debilitating condition forced the boots to be hung up, once and for all, after 340 career outings. He was appointed Wrexham trainer for the 1939/40 campaign but had a change of heart and stepped away from football. However, football was not far away, as he took on the management of The Turf Hotel, adjacent to The Racecourse. Border Brewery knew full-well that the local sporting hero would draw in the patrons in droves. With war underway he agreed to oversee the Wrexham junior team, he also gave frequent cello recitals to raise the moral of troops and civilians. 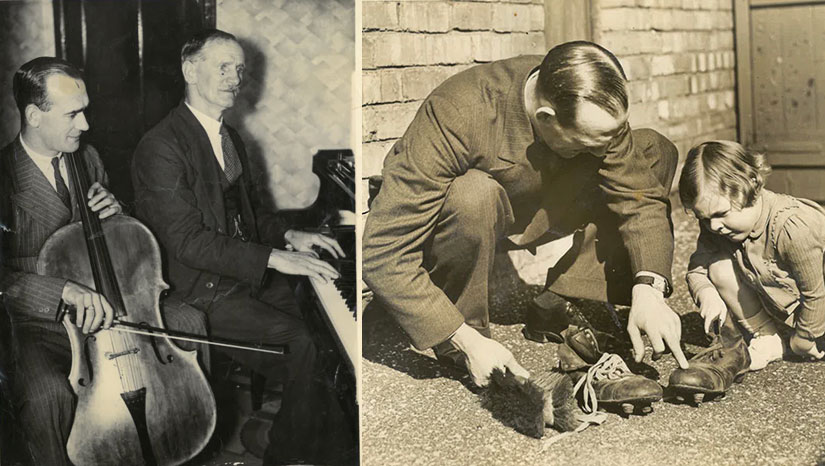 Left: Tom and his father perform a musical duet; Right: Tom with his daughter c. 1939

In 1949 he was elected to the board of AFC Wrexham but stood down 11 months later to become the trainer-coach. On taking up the role he was quoted giving a mission statement: ‘We want teamwork, with open, clean, football. Cut out the fancy stuff and play as a team.’ Tom held this position for two years before stepping down when the club’s financial position forced cuts to be made. Instead, he focused on his career as a publican. By now he was mine host at the Red Lion in Marchwiel, after a short spell at the Hand Inn on Holt Road. Family recollections are that this gregarious and kind-hearted person was not the most astute of businessmen as he was too generous for his own good, giving away as many pints as he sold.

In retirement, from the late 1960s on, he was a doting grandfather to his three grandchildren, Suzanne, Phillip and Kathryn. Phillip recalls: ‘My memories of granddad are many. I can remember him teaching me to play football - the various arts of trapping, heading etc. He used to regale me with stories of when he played for Everton and all of his clubs, and the big matches with the sheer scale of the crowds watching.’

Sadly Suzanne, was ill as a child and spent periods hospitalised in Liverpool before passing away in 1970. It was at Alder Hey that her brother, Phillip, came face to face with his football idols: ‘There used to be a milk bar just outside the hospital grounds. I’d wander around and went in – finding all of my Everton heroes in there: Alan Ball, Gordon West, Brian Labone, Sandy Brown…I told them that my grandad used to play for Everton and they told me to sit down with them. I did it three or four times and they were most welcoming.’ 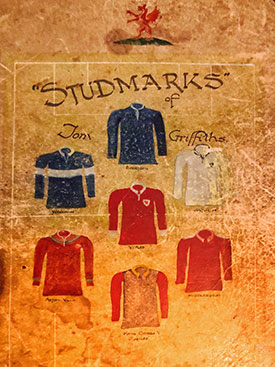 The colours that Tom wore as a player

A year so later, Tom got in contact with Harry Catterick. The Toffees supremo invited the former Everton stalwart and his grandson to the stadium for a personally-led tour and lunch. It was a hugely enjoyable day. Tom would occasionally take Phillip to matches at Goodison and, also, to The Racecourse. He never lost his passion for music, with the cello kept in the house until he moved into a care home for his final few years, as dementia set in. His wife, Elizabeth, was in no doubt that this illness was a legacy of the incessant heading of the heavy leather balls in training and in matches - she’d recall watching matches from the stands and seeing Tom running around when he was clearly concussed. Tom passed away peacefully on Christmas Day 1981 at the age of 75. Everton Secretary Jim Greenwood wrote to offer condolences to the family, on behalf of the club.

T.P. Griffiths is understandably overshadowed at Everton by his countryman and fellow centre-half T.G. Jones. However, the older man enjoyed a distinguished career with some of the greatest clubs in the land and was the subject of accumulated transfer fees eclipsed only by one other player of the period. Above all else, he was a gentleman of the highest order. 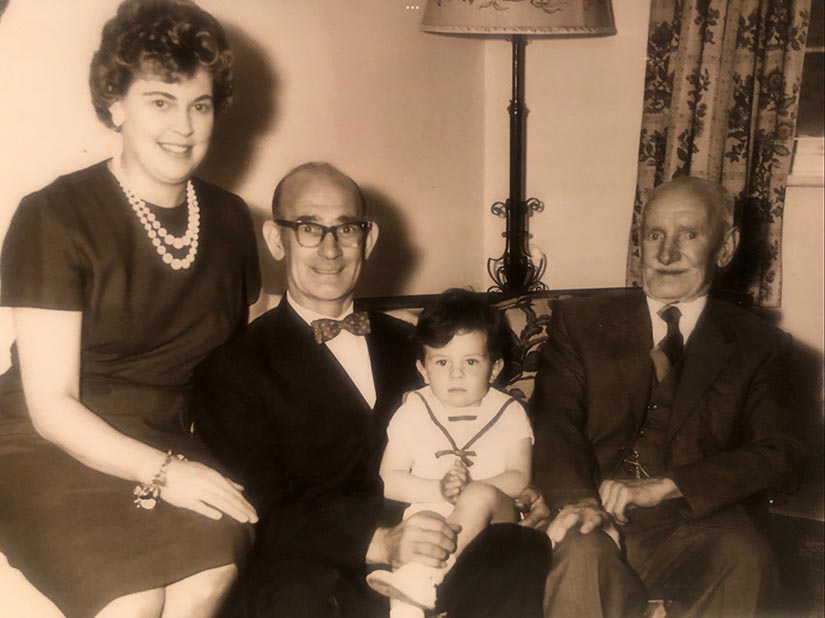 Four generations: Tom with his father, daughter and grandson, Phillip

This one is particularly interesting as it's not an obvious name that springs to mind. Well, not to me anyway. Thank you for the research.

Dave Abrahams
6 Posted 13/08/2022 at 08:47:45
Keep these stories coming, Rob, they are always interesting and the different qualities of life from then to now is vast and the past, although poorer and harder, seems better to me in many ways.
Jack Convery
7 Posted 13/08/2022 at 08:49:23
Thanks for a really interesting article about another Everton player of a bygone era. I really enjoyed reading it.

Find out how to browse ad-free and support ToffeeWeb
© Rob Sawyer. All rights reserved.