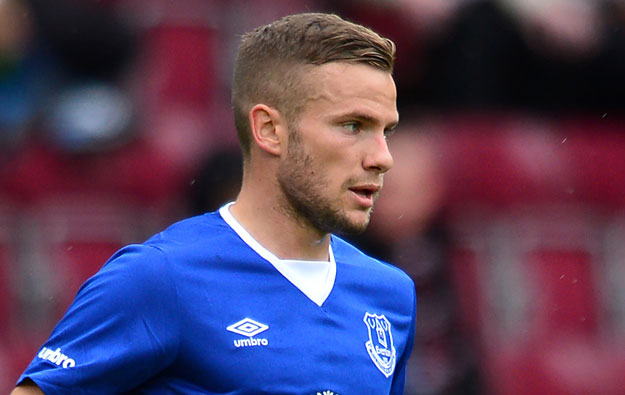 Lauded at one time by Sir Alex Ferguson as the man to replace Paul Scholes at Manchester United, Tom Cleverley's career at Old Trafford did not pan out the way many expected in the immediate years before he joined Everton in 2015.

The Basingstoke-born midfielder went from player of the year at Watford in 2009-10 where he spent the season on loan and being described by Ferguson as “the best player on the pitch” in a pre-season friendly against European champions Barcelona in 2011 to being farmed out on loan in 2014 to struggling Aston Villa before he was released as a free agent in the summer of 2015.

In between, Cleverley had followed that eye-catching display against Barca with an impressive second-half substitute appearance on his debut against Manchester City, helping the Red Devils recover from a 2-0 deficit to win the Community Shield with a 3-2 victory at Wembley in August 2011. Within a month, he was in the England squad and would go on to collect a Premier League title winners medal in 2012-13.

However, under Ferguson's successor, David Moyes, he soon fell out of favour and he was forced to acknowledge in 2014 that his days at Old Trafford were numbered when Louis van Gaal arrived that summer.

It looked at that point as though he was set for a move to Everton where Roberto Martinez was keen to link up with a player with whom he had worked as manager in 2010 at Wigan Athletic where Cleverley played on loan. However, a deadline day switch to the Blues fell through and the then 24-year-old accepted a season-long spell at Villa instead.

A very mixed season would follow as he struggled under Paul Lambert, suffering repeated substitutions and getting booed by the frustrated Villa fans as they saw their side fight off relegation, but things improved briefly under Tim Sherwood, who led them to a surprise appearance in the 2015 FA Cup Final after denying Liverpool with some determined play in the semi-final.  However, Villa bombed in the final where Cleverley himself was largely anonymous, crashing 4-0 to Arsenal on the back of a dismaldisplay.

Martinez had given Cleverley his Premier League debut at Wigan five years earlier, after the player had been on loan spells with Leicester City and Watford as part of his development, and was keen to take advantage of the player's desire to rebuild his flagging career at Goodison Park after he came to the end of his contract at United.  He completed a medical and a pre-contract agreement in early June before officially signing for his new club on 1 July 2015.

He followed a number of other Everton players (Tim Howard, Darron Gibson, and previously Phil Neville) who could not sustain the required standards at Old Trafford, while his Wigan heritage was shared with an increasing band of other players – Arouna Kone, Joel Robles, James McCarthy, Antolin Alcaraz – who had had contrasting fortunes since following their manager to Everton.

Despite his pedigree as an intelligent midfielder capable of playing in a number of roles, chipping in with goals and assists and drifting in behind the frontmen, his move to Everton did not reignite his career in the way many hoped. His initial impression with the Toffees was positive as they made a solid start to the 2015-16 campaign but the midfielder suffered a massive blow in just the fourth game when he came off worse in a controversial tackle by Tottenham (and ex-Everton) defender, Eric Dier. Initial fears of a fractured ankle proved to be unfounded but six to eight weeks on the sidelines recovering from serious ligament damage was the eventual verdict.

Thankfully, his return to the side was a seamless one, the midfielder slotting back into the side as cover for the injured James McCarthy and then recording his first Everton goal in dramatic fashion in stoppage time of a Boxing Day encounter at Newcastle that won the game for the Blues.

His form was chequered over the rest of the season, however, as Everton's season eventually derailed in ignominious fashion and Martinez was dismissed following the penultimate game of the season, paving the way for the Ronald Koeman era at the club.

As was the case with many of the players Koeman inherited, Cleverley was given his opportunities to impress the new boss in 2016-17, making 12 appearances in all competitions but he was unable to stamp his authority on an inconsistent team that struggled for form before the New Year and it became clear that the now 27-year-old was surplus to requirements.

In January 2017, he re-joined Watford on loan until the end of that season, with the Hornets negotiating an option to sign him permanently for £8m in the summer if all went well and an appearance-related clause was met. He committed to a five-year contract with the Hornets at the end of March with the contract coming into effect on 1 July 2017.