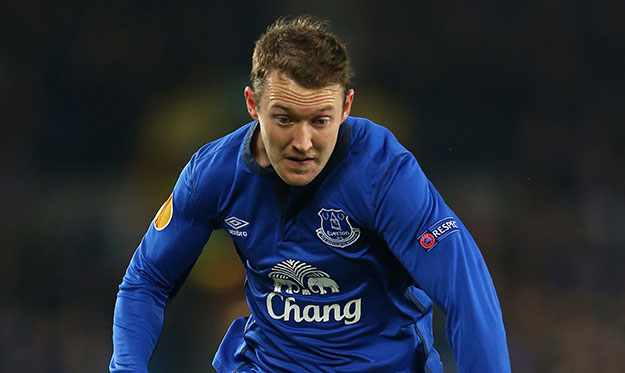 Long an admirer of the Irish international midfielder, Roberto Martinez moved to finally land winger Aiden McGeady for Everton in January 2014 after losing out to Spartak Moscow for his services during his time as Wigan manager.

An established Republic of Ireland international, McGeady had spent 4 years in Russia after his £9.5m move from Celtic in August 2010 but, after 72 appearances and 11 goals, he had fallen out of favour with Spartak's manager and become surplus to requirements.

McGeady was officially transfer-listed in December 2013 but looked destined to run his contract down to its conclusion the following June before Everton stepped in with an undisclosed bid to sign him during the January 2014 transfer window.

Born in Denny in Scotland, McGeady came from a footballing family – his father, John, was was once offered a contract by Everton. He came through the ranks at Celtic and became one of the Glasgow giants' best players. During his time at Parkhead, he won four Scottish League titles and a pair each of Scottish FA Cups and Scottish League Cups.

He became Scotland's most expensive export when he left for Moscow where he made an instant impact, being named in the Russian Football Union's best 33 players.

A tricky, old-fashioned winger, McGeady liked to take on defenders with quick feet and pace primarily down his preferred right flank. Like teammate James McCarthy, though he was born in Scotland, he opted to represent the Republic of Ireland at international level and had 63 caps by the time he signed for the Blues.

McGeady made his Everton debut as a substitute in a 1-1 draw at West Bromwich Albion in January 2014 and was handed his first start in an FA Cup Fourth Round tie at Stevenage the following week where he helped the Blues to a 4-0 win.

But he got relatively few starts in his first half-season at Everton, being called out as a sub on more occasions, but failing to really deliver the goods, with no goals and just two assists, despite plenty of earnest-looking and occasionally tricky wing play.

His first full season was similarly frustrating, with erratic form following a cracking goal at Leicester on the opening day of 2014-15 and then injury and suspension sidelining him after the New Year.

With a demonstrated ability to affect matches, however, particularly off the bench as an "impact sub", McGeady had a place in the Blues' squad, as Martinez confirmed when dismissing rumours that the winger might be leaving Goodson in the summer of 2015.  The Liverpool Echo reported that Everton were prepared to sell the winger during the transfer window but it is believed McGeady turned down moves to Norwich City and Sunderland on transfer deadline day.

However, he would not be fit to start the new season, succumbing to a hamstring injury that would keep him out for the first few weeks of the following season.

In the interim, the form of Gerard Deulofeu, who had returned to the club on a permanent basis, and the presence of the more dependable Aaron Lennon meant that McGeady became completely frozen out of the first-team picture at Goodison Park, with the 30-year-old later admitting that Martinez had informed him he was no longer part of his plans after a poor showing in the Capital One Cup tie at Barnsley – his only senior appearance for Everton in the whole 2015-16 season.

By the time the winter transfer window opened in January 2016, he was largely viewed as surplus to requirements and reports surfaced that he would be made available for loan for the second half of the season, his inordinate wages (rumoured to be £60k/wk) the main stumbling block to a permanent move to a more fitting environment.  After two years on the fringes of the Everton squad, he was forced to drop down a division to the Championship, accepting a loan deal with Sheffield Wednesday in search of first-team football.

Initially resistant to move down to the Championship, McGeady ultimately had no choice if he wanted to remain in the thoughts of Martin O'Neill for Euro2016. However, while it had been expected that a player with his talent and experience would be a vital part of the Owls' promotion push, he wasn't even in their squad at all for the Championship playoff final at Wembley.

That surprised his international manager who would be giving McGeady and players like his Everton club mate, Darron Gibson, extra training sessions as they prepared for a friendly against the Netherlands ahead of Euro2016:

“Yes, yes, I am [surprised],” O'Neill said in the Irish Examiner. “He made the effort to go out on loan in January and that was commendable, obviously thinking about the Euros.

“I could understand the manager not starting him in some games, or playing him and taking him off, because maybe he did not think his match fitness was really there. But, for whatever reason, he wasn't involved in the second (semi-final) leg at Brighton.

“Then the manager told him he wouldn't be involved in the final.”

Having fallen out of favour with Martinez, it was fully expected that McGeady would move on from Everton in the summer had the Catalan remained in charge.

That uncertainty didn't stop him going to the Euros with the Republic of Ireland, and playing in the pivotal group game against Italy, who they beat 1-0 to progress to the knock-out stage.

The Paisley-born winger was not expected to have a future at Goodison Park, despite having 2 years yet to run on his current contract; however, he was given the chance to impress new manager Ronald Koeman in a couple of pre-season games... and failed miserably.  It was no surprise then, that his shirt number had been given to Gerard Deulofeu in the new season squad list, and he would later move to Preston in a season-long loan deal for 2016-17.

McGeady did well in the Championship, scoring 8 goals, and he was ultimately voted Player of the Year for Preston, with an option for making the move permanent. McGeady would later hint that the Preston chance fell through because they could not afford him, even though Everton were asking very little by way of a fee.

He ultimately ended up following manager Simon Grayson to Sunderland, completing the move in July 2017 for an undisclosed fee thought to be between £250k and £500k.