Kick-off was delayed until 3:30pm due to a fire that closed Goodison Road.

With Mikel Arteta suspended and a big match coming up on Tuesday, Chelsea in the League Cup semi-final — David Moyes chose to change things around a little, with Stefan Wessels getting a start in goal, Alan Stubbs as captain leading the backline, Baines, Gravesen, McFadden, Vaughan and Johnson all starting.

A nice move in the first minute saw Pienaar create the first half-chance for James Vaughan, whose header was saved.  After more early pressure from Everton, the game settled somewhat and Oldham looked more comfortable.

Everton then seemed to loose their way a little in the first half, the Blues lacking any rhythm, with Carsley and Gravesen even arguing! A horrible scramble from Wessels in no-man's land saw a very clear chance for Oldham but they failed to convert it.

A good effort from Smalley off a long throw, flicked on, his shot was saved on a diving lunge from Wessels.  Alert volleyed over from the resulting corner. A real scramble at the other end finally raised the tempo just before half-time as McFadden's shot was cleared off the Oldham line.

Right at the end of a poor first half for the Blues, Gary McDonald took a long potshot from distance and it dipped into the goal over Wessels head, to put Everton behind at the break.

Everton showed a bit more life in the second half, galavanised no doubt by some flying teacups at half-time, but failed to really test Crossley in the Oldham goal.  Gravesen and Vaughan were dragged off, Vaughan having been particularly  disappointing, Anichebe and Yakubu came on in their place to increase the goal threat with 18 minutes gone in the second half.

Oldham soaked up the pressure with the idea they could hit Everton on the break. And it nearly worked.

Baines finally got forward and got a ball in to Johns who laid it back to Yakubu but his shot was poor. But Oldham got the ball and attacked again to keep Everton stretched while they played the clock down.  Lescott for Baines was all Moyes could do in a final desperate change as the minutes ticked away...

McFadden had a good chance after a bit of decent pressure but it was cleared for a corner that Crossley punched away.  Oldham came right back and won their own corner at the other end, with just 9 mins left, a real test for the Blues and their uncanny ability to score late goals...

Lescott got in at the far post but Smalley was there to put him off his header, which sailed over the bar. McFadden fired in another cross but it was poor — too close to Crossley, summing up his and Everton's afternoon.

Three minutes of added time were not enough to save Blues' embarrassed blushes at yet another atrocious FA Cup result under David Moyes.  Johnson tried an overhead kick that would not go in, and McFadden's final cross was again too easy for Crossley.  Rennie added a lot of time on for injuries and time wasting, allowing Yakubu to hit the post right at the end, proving it simply was not going to be Everton's day.

An astounding result, with Everton fielding a weakened team at home against an Oldham side unbeaten away for some months but with at least six players out through injury, throwing away the chance to fight for what used to be the greatest knock-out competition in the world.  Everton on this performance did not deserve to win.  Very sad.

Postscript: Moyes would later rue the decision to field a weakened team: “We found out against Oldham to our cost that you have to be at your full to win the game. We have to be totally focused on every game we are in, whether we are 2-0 up or 2-0 down.” — David Moyes, prior to the Uefa Cup 2nd leg at home to SK Brann.

Already going great guns in the Premier League, through to the last 32 of the Uefa Cup and preparing for a Carling Cup semi-final first leg against Chelsea on Tuesday, Everton open battle on a fourth front this weekend as Oldham Athletic come to town in the FA Cup Third Round.

It pits the two sides together for the first time in this competition since 1990 when the Latics, managed then by Joe Royle, overcame the Blues after a second replay but were stopped at the semi-final stage in heart-breaking fashion by eventual winners, Manchester United.

Royle, of course, came home to Goodison to steer Everton to Wembley glory in 1995 and he remains the last Englishman to win the famous old trophy, dominated as it has been since by the monied elite — the Blues are also the last team outside of the so-called "big four" to win the FA Cup.

The Third Round phase is never a time for experimenting with line-ups but David Moyes is again unlikely to be able to field his first-choice XI due to injury and suspension.  Mikel Arteta serves the second match of a three game ban while Leon Osman remains sidelined as he recovers from a broken big toe.

Tim Cahill (knee) and Joseph Yobo (foot) are doubts after missing the New Year's Day victory at Middlesbrough but Thomas Gravesen is fit again after overcoming a knock to the knee sustained against Bolton on Boxing Day. 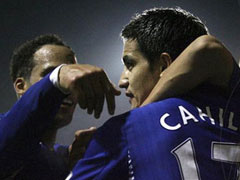 Tim Cahill: missed the Boro win with a knee injury

The Dane could be drafted back into the starting XI but it wouldn't be surprising to see the manager retain the side that won so comfortably at the Riverside Stadium. Steven Pienaar looked like he could do with a good rest, though, and Moyes may bear that in mind as he keeps on eye on the massive game at Stamford Bridge just three days later. Of course, the South African may not even be allowed by his country to stick around as long as Tuesday!

Athletic have struggled mightily at home — they've only won once at Boundary Park since beating Crewe Alexandria in League One at the end of September, that a home win in the FA Cup Second Round, also against Crewe — but on their travels they have been in electric form.

They've won six on the bounce away from home and have only lost once on the road in four months.

They will, of course, be coming up against an Everton side who have only been beaten by clubs from the elite group Royle recently dubbed the "Platinum Four".  The Blues' last defeat to a team not called Manchester United, Arsenal or Liverpool was way back on 7th October and, of course, they're unbeaten in cup competition so far this season.

Cup games, especially at the 3rd Round stage, are never routine but a home tie against a team two division below is about as good an introduction to the tournament as a Premier League side should expect.  With confidence so high, it should be a routine win for Everton but Mr Moyes already knows about what can happen in this competition and he won't be resting on his laurels.