David Moyes finally rested two of his favourites, Hibbert and Osman, who have been looking increasingly jaded in recent weeks, Lars Jacobsen and Dan Gosling given starts in a new-look right-hand side.  Jô, Fellaini and Cahill also started in a pretty strong line-up that was merited in the face of a strong, determined and decidedly niggly Sunderland side.

Head injuries were the theme in the first minute, Malbranque coming off  worst against Cahill, off down the tunnel for 5 stitches and plenty of Vaseline.  The rest of the first half was scrappy stop-start stuff, with Atkinson blowing for almost all contact, and Jo being caught offside seemingly on every forward move.  But it was Everton who played the better football and looked the more comfortable, although the Sunderland style of aerial attack was at least getting ball into the Everton area.

Jô had been lively up front and looked to have a good chance, cutting inside form the left but his shot flew a foot wide of the far post.  On replay, it looked like Fulop got enough on it but, not for the first time, Atkinson erred on the corner decision.

It was not long after the start of the second-half, with Everton looking increasingly dominant that Jô fed a nice ball through to the energetic Pienaar.  He commendably held off Bardsley and just about kept his footing (when in truth he could easily have gone down for a penalty) enough to slide the ball nicely under Fulop for the crucial opening goal.

The win was effectively sealed when Jacobsen fed a good ball forward to Pienaar in space, and he picked out Fellaini with an inch-perfect ground ball, giving the Big Fella just the right set-up for an accurate side-foot onto the net form 12 yards.  A deceptively simple elegant goal of great quality.

After that, Moyes pulled Jacobsen off and  sent on Jack Rodwell for the last 20 mins.  Cahill was booked for a trip on Bardsley, and it looked like Jones might score as Everton ball-watched the resulting free-kick.  Pienaar then went into the book for a lunge near the touchline. Jô was then switched out to give Louis Saha a  coddled 10 minute run-out to keep him loose!

Gosling, who had been somewhat disappointing, and then Saha for having his foot dangerously high on Anton Ferdinand, both went into Atkinson's book in the last 5 mins... four yellow cards had become something almost unheard of in recent months for Moyes's highly disciplined players.  Castillo then came on for Gosling.

Everton comfortably played out the rest of the match in  front of a deliriously happy travelling contingent, an excellent result and a well-drilled professional performance, thankfully shorn of the perennial frustration that is Leon Osman.  Hopefully he is now in serious jeopardy of losing his place for the final!

Everton's quest to overhaul Aston Villa and finish fifth for the second season running continues this weekend with their penultimate away game of the season, a potentially tricky trip to Sunderland.

The Black Cats are four points above the relegation zone and hoping to put more distance between themselves and the four clubs below them, while the Blues are hoping that Hull City can extend Aston Villa's winless run to 10 games when they play at Villa Park on Monday night.

A win for David Moyes's men at the Stadium of Light would be their first on the road since the last time they were in the northeast when they beat Middlesbrough on Boxing Day and would see them leapfrog over the Villans for 24 hours at least.

In addition to Phil Jagielka, whose season came to a premature end last weekend when he ruptured the anterior cruciate ligament in his left knee against Manchester City, Moyes will also now be without Jack Rodwell who picked up an injury playing for the Reserves in midweek. 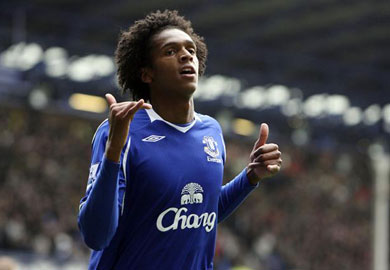 Joleon Lescott will partner Joseph Yobo at the back, Jô is expected to return to the starting line-up up front and Tim Cahill should start as well after being rested for the first hour of the defeat to City.

That leaves Moyes with a decision to make between Segundo Castillo and Marouane Fellaini and much will likely come down to the latter's fitness. Fellaini picked up a knee injury in the FA Cup semi-final and wasn't able to complete either of the last two Premier League games.