Everton smashed the only undefeated home record in the Premier League with an exemplary away performance, scoring a goal in each half and frustrating their hosts admirably to put a large dent in Manchester City's much-vaunted Champions League challenge.

Tim Cahill's 33rd-minute header looked increasingly like it could be the winner as City laboured to break down the Blues' resolute back line, at the center of which Sylvain Distin had a magnificent evening against his old club, even as David Moyes withdrew Louis Saha and deployed Tim Cahill as a lone striker with a full 20 minutes left in an attempt to see out the game.

But Mikel Arteta capped a fine evening when he swept home the game-killing second goal with five minutes left of the regulation 90 minutes as Everton completed the double over their money-bags near neighbours from along the M62. The result keeps the Blues in eighth spot but brings them to within three points of Liverpool and Aston Villa above them, although the Villains have played a game less.

Though Everton started the game by controlling possession and looking more like the home side than an away side with just three wins all season on their travels, City found their feet after about 10 minutes and began to look more and more threatening as the first half progressed, helped by some typically poor refereeing by Peter Walton who waved play on as Steven Pienaar was scythed down from behind by Micah Richards.

With Craig Bellamy as energetic as always and Carlos Tevez proving to be a handful, City looked at times to be one cohesive move away from unlocking the Everton defence, no more so than in the 24th minute when Tevez raced onto a dinked ball over the top but despite initially hesitating, Howard came off his line smartly and did just enough to get a block in and Jagielka hacked it clear.

Then, after Cahill was clearly fouled in two aerial challenges but not awarded a free kick in either case, a decent City move ended at the feet of Bellamy on the far side of the area but his low shot was gathered by Howard at the second attempt before Tevez wriggled his way through the box but was shut down by a combination of Distin and Jagielka before he could get his shot away.

Cahill was finally awarded a free kick by referee Walton when he out-muscled Gareth Barry on a surge to the byline and was fouled by the midfielder before he could go around him and that set up the set-piece opportunity that provided the opening goal.

Arteta shaped to cross it into the mixer but instead laid it back to Leighton Baines who clipped the ball into the six yard box for Cahill to nod past Shay Given before wheeling away for his trademark celebration at the corner flag. 1-0 and probably against the run of play but a huge advantage, both in terms of scoreline and psychology. Having scored the winner here last season, it was the Australian's third goal on City's home turf and it was enough to take the Blues into half-time ahead.

The expected onslaught by City in the second half took a while to arrive and when it did, it was fairly short-lived. Instead, it was Everton who looked the more likely to score in the early stages of the second period. Leon Osman saw a shot deflect off Vincent Kompany and fly inches wide, Arteta had a tame effort easily saved and Cahill almost made Kompany pay for an awful slip but his delicate chip drifted just the wrong side of the post.

With the Eastlands crowd getting increasingly antsy, City finally started to find some rhythm again with 25 minutes of the contest remaining but Tevez planted a lame direct free kick attempt into Howard's arms, Richards was off-target from distance and Shaun Wright-Phillips half-volleyed over the bar after Tevez had ducked out of the way of a cross from the left wing.

With 18 minutes on the clock, Moyes made what turned out to be an inspired move but, at the time, smacked a little of premature conservatism in trying to hold onto a single-goal lead. Saha, who had not had the best of nights anyway, was removed in favour of Rodwell and Cahill pushed up to defend from the front. And that defensive posture was seemingly confirmed at a 79th-minute free kick when Arteta was given just two black shirts at which to aim after Pienaar had been flattened for the umpteenth time by Zabaleta.

City pressed but save for one moment when Osman dalled and was robbed by Kompany who released Roque Santa Cruz between the central defensive pair and the Paraguayan drove over the bar from 18 yards, they didn't really look like breaking Everton down.

And with 84 minutes gone, Moyes's boys completed the job with a wonderfully-worked second goal. Osman jinked away from a challenge and then fed Rodwell down the right flank who powered past Kompany, turned inside and laid the ball back across the area. Cahill dummied expertly, Arteta picked his spot past Given and City's fate was sealed by another moment of magic against Mancunian opposition from the Blues' young prodigy.

And that was that. The home fans began drifting away into the Manchester night while their team tried vainly to get something in the four minutes of added time. Mancini, on whose head this result will be, let his frustration boil over, though, when he inexplicably raced out of his technical area and charged into Moyes to wrestle the ball off him.

The two managers squared up to each other but though there was no hint of retaliation from Moyes — he need only have asked, "what's the score, Roberto?" — both were sent to the stands by the referee while Joseph Yobo was sent on in place of Arteta to waste a few seconds before the final whistle signaled another excellent result for Everton.

Clearly one of the top four teams in the country on recent form, the Blues can only wonder where they would be had that early-season injury crisis not ruined their form and left them with a mountain to climb in their own quest for fourth place.

What is becoming abundantly clear now, though, is with nearly all his best players fit, Moyes's team is unquestionably the real deal. Keep this group of players together and he has the foundation from which to seriously challenge for entry to the Champions League next season.

Meanwhile, Europa League qualification remains an eminently achievable goal this term... as long as complacency doesn't creep back in against the likes of Wolves, West Ham and Portsmouth in the coming matches.

Goodison Park may well be a fortress again seeing as the Blues have won seven straight and lost just one of the last 10 at home but Everton's away form has been chequered at best in recent weeks. Now they get the opportunity to translate their scintillating form on their own patch to their performances on the road with successive matches at Manchester City and Wolverhampton Wanderers.

First up, a midweek trip along the M62 to Eastlands to face a City side that appears to be hitting their stride a little under Roberto Mancini. Since Everton sent them packing from Goodison having been soundly beaten 2-0 back in January, they've lost just once and picked up impressive away wins at Chelsea and Fulham.

Though they've struggled on the road, they've been strong at home and are unbeaten so far at Eastlands in the League so this will be a particularly tricky game for David Moyes as he looks to pick up only his fourth Premier League away win all season.

With Louis Saha making a successful comeback from his latest muscle strain with a second-half appearance against Bolton, Moyes may make a change to the line-up that started that win over the Trotters. The Frenchman could replace Yakubu as the lone striker and though Victor Anichebe returned to training this week after being stretchered off the field on Saturday following a blow to the kidneys, he might not be risked from the start.

That may open the door for Leon Osman to make a return to the starting XI on the right side of midfield as Moyes has been reticent to use Diniyar Bilyaletdinoc away from Goodison in recent weeks. 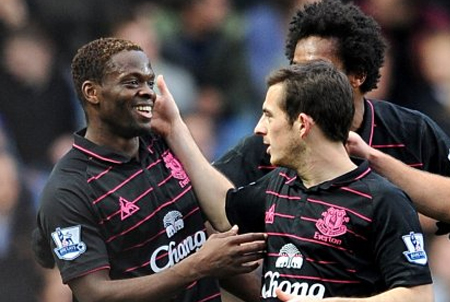 Louis Saha: fit again and could return to the starting XI

City's biggest injury news, of course, the hamstring injury to Joleon Lescott who will again miss out on the chance to face his old club. The defender, who left Everton in the summer for £24m, was also injured for the reverse fixture.

In terms of the chase for the European places, this matchup might have been more tasty had City not won at Craven Cottage on Sunday as they would only be five points away with Arsenal, Manchester United, Aston Villa and Tottenham still to face before the end of the season. As it stands, they're eight points better off than Everton going into this one and, though still "catch-able", they do have a game in hand and relatively comfortable games against Wigan, Burnley and Birmingham to come before their fixture list starts to get uncomfortable.

For Moyes and Everton, it's just a case of one game at a time an concentrating on transferring the attractive and incisive football that has been a hallmark of their recent success at home to their away performances. Again, play like they did at the Emirates — and if City afford them the kind of time and space they enjoyed the last time the sides met, they'll be able to — then they could spring a surprise and become the first team to win at Eastlands this season.