A few more players available again after the stress and strain of a midweek trip to Belarus, where a severely depleted side came away with an excellent win over BATE Borisov in the Europa League. Rodwell, Heitinga, Bilyaletdinov, Saha all return to the starting line-up; Osman captain.  For Stoke, James Beattie returned to Goodison with no doubt a point to prove... Steve Simonsen on the bench.

Bilyaletdinov, Fellaini and Cahill combined for the first real chance, a great pinpoint cross from the left, Cahill just onside, but he crouched and headed straight at Sorensen after 15 mins. Stoke had their chances too but the pace of the game flagged somewhat after the half-hour.

Fuller got booked after aggressive play on Heitinga. Diao was booked for going in on Baines. From the free-kick, Heitinga rather wasted it.

Shortly after half-time, Stoke  stole a goal, Huth evading Cahill to nod the ball past Howard off a corner. Everton responded well, Leon Osman had a shot and missed but then got another opportunity to get on the score sheet, playing a nice one-two with Heitinga before bending a nice shot in off the bottom of the crossbar for a great equalizer.

With 15 mins left, Moyes decided to make some changes, bringing on Jo and Yakubu for Bily and Osman, the armband going to Hibbert.  Shawcross and Fellaini clashed and both went in his book.  But Stoke were sitting solidly on their point.

Yakubu almost got a chance in the 4 mins of added time but it didn't happen. A "winnable" game not won. Ho hum.

A combination of travel fatigue and injuries appeared to catch up with Everton as three points went begging against Stoke City. The Blues, who had put over 3,000 miles on the clock since their last home fixture against Blackburn Rovers and won three games in as many competitions, found a sixth successive win elusive against a physical and uncompromising Stoke team.

Ultimately, David Moyes's side had enough of the possession and the initiative to have eked out a victory but lacked the imagination to break down Tony Pulis's resolute defence. As many Evertonians feared, it was the loss of Steven Pienaar's effervescent creativity that was mostly keenly felt; as yet, there isn't the same kind of understanding between Leighton Baines and Diniyar Bilyaletdinov down the left flank and the Russian is still adjusting to the pace and rigours of the Premier League game.

In the end, Moyes had to be content with a point earned by a beautiful 55th-minute strike by Leon Osman that canceled out Robert Huth's header five minutes previously. Though the Blues finished the game with three strikers on the pitch, they struggled to create enough meaningful chances to allow them to grab the winner that their dominance deserved.

Joseph Yobo was again missing from central defence, but this time it was Johnny Heitinga who filled the breach and Tony Hibbert started at right back. Hibbert's detractors have been vocal but he followed his excellent display in the centre against BATE on Thursday with another impressive shift today. After his highly disappointing performance at Portsmouth, Heitinga deserves great credit as well and together with Sylvain Distin he formed a solid defensive partnership against the determined duo of James Beattie and Ricardo Fuller.

Indeed, Fuller seemed up for it in the first half and he planted headers straight into Tim Howard's arms in the first 20 minutes as the visitors from the Potteries showed tremendous resilience and sense of purpose in the early going.

But it was Everton who were firmly on control possession-wise and they might have grabbed the lead after a quarter of an hour when Marouane Fellaini picked out Tim Cahill with a superb cross but the Australian's stooping header was too close to Thomas Sorensen and the 'keeper saved comfortably.

Two big shouts for penalties were waved away by referee Andre Marriner, first when Bilyaletdinov's powerful drive was stopped by Ryan Shawcross's arm and, after Osman had brought a brilliant one-handed save by Sorensen with a terrific shot from 18 yards, Fuller appeared to divert the resulting corner behind with his forearm.

After over-hitting two prior set-pieces, a third corner in the same spell of pressure offered Bilyaletdinov another chance to deliver a telling ball but after playing it short to Louis Saha, he wasted the opportunity with another poor cross.

The last chance of the first half was Heitinga's from a direct free kick in another dangerous area outside the Stoke box but he curled a right-footer well wide.

Based on the first half and the manner in which the second started in much the same vein, it hard to see just how Everton were going to make the breakthrough. Whereas Pienaar is usually a constant source of movement and inspiration, there was no one really able to take the baton from the injured South African. Neither Fellaini nor Bilyaletdinov or Jack Rodwell are the same kind of player; Osman, perhaps the closest in terms of creativity when he's on top form, was generally weak.

So, when Rory Delap swung in a corner five minutes after the break and Huth easily broke free of Fellaini to rise mostly unchallenged to head into the far corner, Everton's task became doubly difficult: having failed to score even one up to that point, they now needed two goals to win the game.

Thankfully, they have themselves every chance of succeeding thanks to a moment of magic from Osman. Four minutes after Stoke's goal, the diminutive midfielder had miscued with a left-footed shot from the edge of the box, but when presented with an almost identical opportunity a minute later, his sights were aligned perfectly. After he'd collected a one-two with Heitinga, His curling 18-yard effort sailed goalward, clipped the underside of the bar and nestled in Sorensen's net.

The rest of the second half was mostly characterised by more Everton pressure but few genuine scoring chances, Bilyaletidnov tested the 'keeper with a low drive from 25 yards, Cahill was again foiled with one his trademark header, and Rodwell also saw a decent long-range effort seemingly drawn to Sorensen's gloves like a magnet.

Moyes's last roll of the dice was to withdraw his two wide men, Bilyaletdinov and Osman and pitch both Jo and Yakubu into the action... with the direct result of removing all width from the team's play. A succession of long balls were easily eaten up by the towering Stoke defence and when they did finally engineer a promising opening on the ground, Yakubu, off-balance, rolled a tame pass-cum-shot towards the 'keeper and the last chance of the game went begging.

All in all, a frustrating afternoon for the Blues, but a lot of credit must go to Stoke who battled for the full 90 minutes, closed down everything that moved and generally dared Everton to come up with some enterprising way of breaking them down.

A two-week international break will now, hopefully, give Pienaar the time he needs to recover from the knee injury that has kept him out of the last two games and restore some of the creative spark that was missing at Goodison today.

Everton prepare for back-to-back home games as a spell of what most would term "winnable" — perhaps even "should-win" — games continues with the visit of Stoke City on Sunday.

The horrendous start that saw the Blues sink to the bottom of the early Premier League table with consecutive defeats to start the campaign now appears to be behind the Blues and two difficult but crucial wins in their last two outings takes their tally to five wins on the bounce.

With confidence and the ability to grind out results having returned, David Moiyes's main concern now is injuries to key players, specifically Joseph Yobo in the context of this weekend. The Nigerian strained a thigh in training in midweek and underwent a scan on Friday, the results of which will hopefully show the extent of the problem.

Although the manager will be hopeful that he'll be fit enough to play some role against Tony Pulis's men, he is obviously a major doubt and it could mean another start in central defence for Tony Hibbert or, perhaps, a home debut for Lucas Neill in that position.

Louis Saha and Johnny Heitinga are eligible, however; Jack Rodwell is expected to have shaken off the flu virus that kept him out of the win in Belarus; and there was good news on Yakubu who came through 75 minutes against BATE Borisov without any ill effects despite his lack of match fitness. 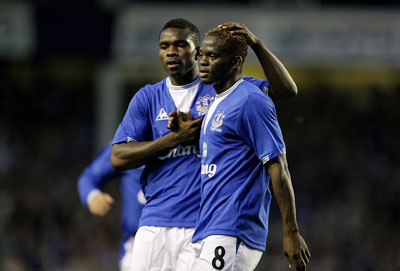 Yobo and Saha: Moyes will be hoping to field both this weekend

Providing the defence is not too compromised by injury, as a home game against mid-table fodder, this is the Blues' game to win. Leading scorer Saha should provide the cutting edge and Dinyar Bilyaletdinov the ammunition in Pineaar's absence as Everton look to consolidate their position in the top half of the table ahead of a two-week break.