As if it wasn't bad enough with pre-match injuries, illness and intelligibility reducing the available players in the Everton squad to barely a handful, Joseph Yobo managed to injure himself in training, making it 11 players missing.  Tony Hibbert moved inside as an emergency centre-half; Yakubu and Jo stared up front, with Everton playing 4-4-2.

Cahill had a pot shot from the off, the keeper saving. A great piece of work saw Diniyar Bilyaletdinov run in on a quick break and fire ion fantastic strike that it the post after 15 mins.

Then, almost from nothing, the ball broke to Dimitry Likhtarovich outside the Everton area and he scored with a fantastic strike, another long-shot rocket to beat Howard from distance.

A dreadful miss from Cahill after being nicely set up by Yakubu, somehow won a corner.  Yakubu was causing trouble as the target man but looked to maybe get a knock before half-time.  Bily's corner was poor, hardly got off the ground.

Distin did well to defend against a lively run down the Everton left, then Jo collapsed in a heap and went off on a stretcher!

A tough first half for Everton, who started to look a little bit more confident as the half progressed.

Jo came out for the second half but looked to be struggling, while Hibbert was doing well and defending firmly in the centre-back role. But going forward, Everton looked slow and ponderous in comparison with their lively hosts.

But Everton fought their way back into the game when Baines curled a free-kick in to the back post and Fellaini in five yards of space headed home.

Then, a probing ball forward from Fellaini was headed forward by Bilyaletdinov to Cahill, who seemed miles offside but was just onside when Bily played the ball, neatly beat the keeper to the ball and hooked expertly it past him into the net for a brilliant leading goal.

Everton were put under a fair amount of pressure in the last 10 mins, shots and corners flying in.

A great result for Everton under the circumstances, to travel to Eastern Europe with barely a team to field, and come back with all three points... excellent achievement.

Playing in Europe clearly hasn't fazed Everton so far this season — indeed, it's almost proved to be an escape from their dreadful start in the Premier League and they've used hefty wins over Sigma Olomouc and AEK Athens to pump up team morale and buoy their league form.

David Moyes and his Blues will be tested sternly this week in Minsk, however, not only by the unfamiliar surroundings of Belarus but also by the fact that the manager will have 10 fewer available players from which to choose for this second match in Group I.

In addition to long-term absentees like Mikel Arteta, Phil Jagielka and Phil Neville, Moyes now has Steven Pienaar and Jack Rodwell on the sidelines after the South African suffered a severely bruised knee at Portsmouth last weekend and Rodwell was forced to remain on Merseyside this week because of flu. It's almost as if his best players are being picked off by fate one by one. 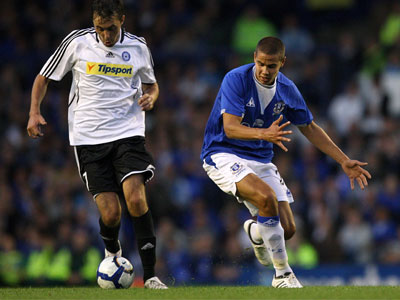 Given that list of absentees, which also includes ineligible late signings like Johnny Heitinga and Lucas Neill and loanee players like James Vaughan, the manager's team may pick itself, with Tony Hibbert coming back in at right back after serving a one-match ban.

Marouane Fellaini, Tim Cahill, Leon Osman and Diniyar Bilyaletdinov would be automatic choices in midfield, with only Dan Gosling midfielder left in the squad with first-team experience so he'd probably line up on the right with Jo up front.

Clearly, Carlo Nash and Yakubu apart, that would leave a very young bench, with the likes of Agard, Mustafi, Wallace and Baxter likely to fill out the team-sheet.

The Belorussians will be unknown quantity to those hardy Evertonians who make the long treck across the Continent, but Moyes and Steve Round will no doubt have done their homework. BATE certainly weren't embarrassed in Lisbon in their opening Group I game which they lost 2-0 and, like most teams from this part of the world, they won't be an easy nut to crack.

A clean sheet and a narrow victory would be an excellent result for a squad stretched to the limit.