Conflicted: Thoughts On the Role of the Echo

As I mentioned at the start of my recent "Slumbering Giant..." series into the present and future of Everton FC, the Blue corner of cyberspace  for want of a better, less twee term  has been reverberating with growing discontent in recent months at the club's apparent lack of direction.

Roberto Martinez's second-season struggles coincided with a slew of anniversaries of past glories, not least the passing of 20 years since the Blues last lifted a piece of silverware, and was punctuated by CEO Robert Elstone's tacit admission that the proposed move to Walton Hall Park remains a distant and, perhaps, untenable prospect without placing a potentially damaging debt burden on the club. That has stirred renewed criticism of the Everton Board of Directors and, in the absence of direct contact with the Goodison hierarchy, many have channelled their frustration towards the Liverpool Echo of late, questioning the clear imbalance in the way the paper reports on the respective problems at the City's two clubs.

Many Evertonians took to social media last month to lambast the Echo for splashing the back-page of their first edition after the final matches of the season with claims of crisis at Anfield in the wake of the reds' 6-1 humiliation at Stoke. The defeat, another amusingly sour note on which Steven Gerrard departed the Premier League, ensured that Liverpool fell from 2nd in 2013-14 to 6th this past season and not only missed out on the lifeblood of the Champions League but also guaranteed entry to the group stages of the Europa League.

Everton, of course, suffered a similarly precipitous drop in fortunes, falling from 5th in Martinez's debut campaign to 11th this time around  losing È7.47m in merit revenue in the process  and earning an unwanted club first by being knocked out of both domestic cup competitions at the first hurdle. The inquest into why was, of course, less robust in the case of the Blues, prompting more and more supporters to take the paper to task over the issue.

As infuriating as that episode was to we Blues, it reflected some uncomfortable economic realities, not least the Echo's need to focus it's football coverage on it's most lucrative topic  Liverpool FC. It's painful for Evertonians to admit but Liverpool are a bigger draw than we are, both nationally and locally, and a look at the content most consumed and promoted on their website on any given day provides a stark illustration of that fact: 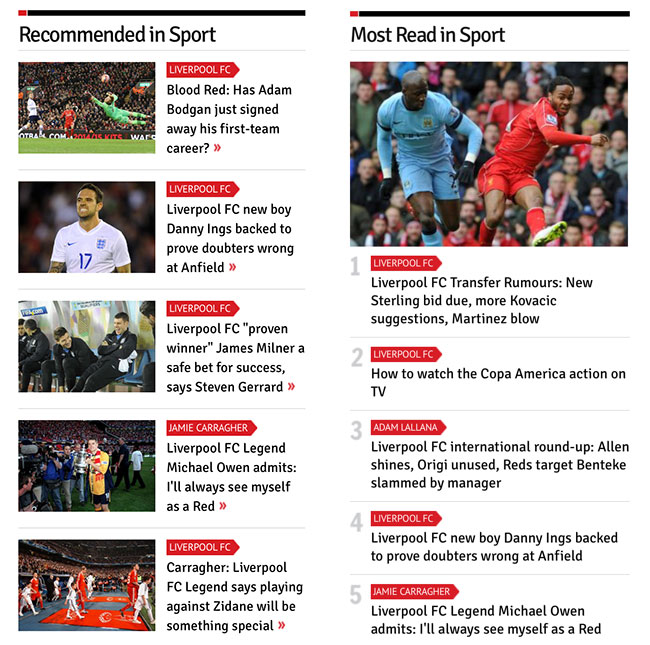 As Chris Feeley explains in his latest piece for ToffeeWeb (A Mission of Disengagement), if the Echo is to avoid the demise that befell its sister paper, the Daily Post, in an increasingly treacherous environment for print publications and where click-bait is the new order for the generation of online revenue, it necessarily needs to cater to its biggest audience. (That doesn't mean there isn't scope for altering the balance of promoted content on Everton-related articles, of course  how many Blues reading about the latest on John Stones are going to be "upsold" on anything penned by Michael Owen or Jamie Carragher?!)

Of course, in a twist of irony that cuts to the heart of the current disgruntlement with the paper, many of the reasons for why Liverpool continue to dwarf us in terms of profile and coverage are the very failings to really kick on at Everton that an increasingly vocal number of fans are imploring the Echo to cover and fully investigate. Citing the local media's extensive delving into Liverpool FC's boardroom crisis during the Hicks and Gillette ownership controversy on the one side of Stanley Park and sycophantic promotion of the Destination Kirkby debacle on the other, some Blues have demanded more action from the Echo in asking tougher questions of the long-silent Goodison regime.

It prompted the Evertonian arm of the paper, led by David Prentice and Greg O'Keeffe, to invite leaders of some of the fan groups and websites to an Everton Symposium at Old Hall Street last month, a sit-down with the dual aim of allowing supporters to air their grievances and for the conversation to form part of a podcast released soon thereafter. ToffeeWeb was among the invitees and had to pull out at the last minute due to personal reasons, but some of those who did attend felt betrayed by the fact that the final audio that the Echo released contained just 40 minutes of a 75-minute conversation.

A frank exchange was encouraged and the case for digging deeper into the goings on behind the scenes at Everton and the lack of movement on investment or a sale of the club was vehemently made so it was unrealistic to expect the Echo to air the meeting in full  not only because of the need for journalistic balance (the podcast included two telephone interviews with supporters more sympathetic to the Board's point of view) but also because, for the same reasons behind the meeting at Echo HQ in the first place, they couldn't.

Following on from Simon Paul's equally articulate but withering analysis of the Echo's "Catch-22" for NSNO.co.uk, Chris outlines many of the reasons why: The paper's publisher, Trinity Mirror, print both Everton's matchday programme and the club's official magazine, and they also own Rippleffect, the digital agency responsible for Everton's online presence. It represents a clear conflict of interest that precludes any serious investigative journalism into the running of Everton FC by the publisher's employees. Furthermore, while the same risk presumably exists at Melwood, reporters don't want to lose access to players as a result of them penning critical pieces (there is precedence here but it was quite a few years ago), thereby starving them of the very information they need to most effectively do the bread-and-butter aspect of their job.

That's not to mention individually-held views and beliefs and the complexities inherent in covering a club you actually support without the detachment afforded by working for national media to the likes of Phil McNulty and Tony Barrett. My own personal conversations with David have revealed both the balance with which he naturally approaches matters Blue and the same caution and fear of the unknown when it comes to the ownership issue at Everton that he expounds in the podcast... and, indeed, his own writing. It's in sympathy with that dilemma and the wider context of conflicting interests under which the journalists at the Echo operate that this website will not be actively supporting any calls to boycott the paper, though we acknowledge any Evertonian's right to "vote with their feet"... or web browser, twitter feed or wallet should they feel strongly enough to do so.

Given all of the above, it's unlikely that the pressure that more and more supporters are demanding be put on the Everton Board to show forward progress or the exposûˋ of information that they hope will spread to the "fan on the street" is going to come from the local press. Naturally, sites like ToffeeWeb exist in the vacuum of such critical coverage where it's warranted but tribalism between various supporter sites and accusations of negativity and perceived agendas has fostered scepticism between Blues and created obstacles to an individual site ever being anything as unifying or far-reaching as papers like the Echo used to be in terms of the fanbase. You sense that only matters getting significantly better or significantly worse at Goodison will bring anything close to consensus... or more coverage of the Blues in the local paper.

In response to a couple of the early comments below, it's worth pointing out something that I meant to add to the original piece was that I don't agree with the assertion that the Echo has become irrelevant when it comes to reporting on Everton.

As really the only outlet apart from the official site that has regular access to players and club staff, they have a very obvious role to play in disseminating news on our club. That access and those relationships that they have forged and maintain at the club provide a unique context and frame much of the kind of day-to-day reportage that no fan-run operation can match.

There may be merit in querying the commercial ties that bind the paper to the club by way of its ownership, but you can't simply dismiss the Echo's importance when it comes to reporting on EFC because I believe a large vacuum would be created were it to go away.