Everton kick off 2015 in defeat 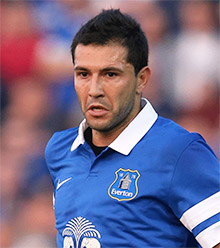 Antolin Alcaraz's disappointing afternoon was capped by a harsh dismissal late on for what Kevin Friend deemed a second bookable offence
Everton start the New Year in crisis as they fell to a fourth successive defeat — the only team in the Premier League to lose all three of their fixtures over the Festive period — and are now staring a battle against relegation in the face unless results improve.

Two first-half goals had Roberto Martinez's side in a hole against a Hull City team that hadn't won at home since October and it proved too deep to climb out of despite two changes by the manager at half time aimed at shaking some life into his beleaguered side.

Despite decent performances by Leighton Baines in midfield and Luke Garbutt at left back at Newcastle last Sunday, the Catalan elected to shuffle his starting XI again, moving the former back to his more natural spot at left back and reinstating Muhamed Besic in defensive midfield.

Neither John Stones nor James McCarthy passed fitness tests but captain Phil Jagielka was deemed fit after missing the last game and a half with an ankle injury.

Arouna Kone continued up front with Romelu Lukaku named on the bench again but Kevin Mirallas came back into the side alongside Steven Naismith who was suspended for the match at St James' Park.

The Blues began with enough of the urgency that had been demanded of them by increasingly frustrated supporters in recent weeks but there was very little end product.

Kevin Mirallas skied an early chance over the bar while Kone and Seamus Coleman dithered too long on the ball in promising areas but Everton might have gone behind as early as the third minute when Gareth Barry clumsily tripped Abel Hernandez inside the penalty area.

Referee Kevin Friend awarded a free kick right on the edge of the box, though, and Nikica Jelavic smashed a direct effort over the bar.

Hull did score, though, with 32 minutes gone when a deep cross from the home side's left flank caught Baines too deep against Ahmed Elmohamady who easily out-muscled the England international to head past Joe Robles.

And Martinez's problems doubled when Hernandez knocked a ball in behind the static Antolin Alcaraz for Jelavic to chase and with Robles rooted to his line until the last second, the former Blue lobbed the ball over him to make it 2-0 heading into half time.

Martinez withdrew Besic and Mirallas at the start of the second half, the Bosnian perhaps taken off because of the yellow card he picked up for a late tackle on Andrew Robertson and the Belgian apparently "feeling a bit sore" according to his manager.

Everton had to escape a let off early in the second period when the ball almost broke for Jelavic and Hernandez inside the six-yard box before the latter stabbed wide but they gradually managed to gather their composure and ask a few more questions of their hosts.

Barkley had the best chance, turning his marker inside out with great footwork before forcing a fine point-blank save from Alan McGregor, Naismith saw a goalbound shot hit the chest of a defender and Lukaku looped a header just over from Baines' ball over the top.

But poor passes in the final third and weak delivery from set-pieces continued to let Everton down while Hull threatened to pile on more misery when Barry blocked Jelavic's shot with 11 minutes to go.

And the Blues' miserable afternoon was complete when Alcaraz was shown a second yellow card for a non-existent foul with five minutes left.

Another disappointing loss means that Everton have now lost all of their last five away games and failed to score in three of their last four fixtures at home and on the road. They slip one place to 13th and are now just four points above the bottom three with Champions Manchester City next up.