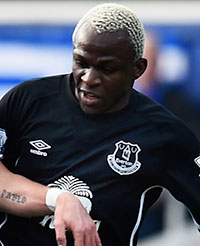 (Photo by Mike Hewitt/Getty Images)
Scans on Arouna Kone's knee have revealed that the Ivorian suffered no serious damage during Sunday's win at QPR.

Kone limped out of the action in the aftermath of Aaron Lennon's 77th-minute winner following a collision with Nedum Onuoha amid fears that he had injured the knee that kept him sidelined for over a year shortly after he signed for the Blues.

It is not clear whether the 31-year-old will be available to face Southampton on 4th April but he will continue to undergo treatment in the interim.

It's a bit like saying Howard has caught something that is "going around".

Hope he sorts his career out. It wonÂ’t be here though.Good Luck.

Anyone know how long Rom will be out for? Or Will Martinez rush him back as he is given to doing?

It took him 3 attempts to get Wigan relegated but he will do it next season.

Just a few there but there's too many to mention in all and I've probably forgotten half of them.

What is Everton "material" these days, all things considered?

Pete Edwards
16 Posted 27/03/2015 at 08:53:13
Funny how, after the first couple of appearances after coming back from his last injury, some were saying how he could teach Rom a thing or two about hold-up play and that he should start ahead of him.....just saying
Jim Bennings
17 Posted 27/03/2015 at 09:43:31
I'm actually quite embarrassed by me forgetting to put on the irrelevant players list three of the biggest wastes of time in recent Everton history:

How could I forget? ... Unforgivable!!

I live in Australia and those that actually recognise my accent (Aussies think I'm Irish) automatically think I'm a RedShite fan; after this season I'm considering just saying I don't follow football.

The ٤ million is just a sign of the times, it's the going rate for average players now.<.p> ٣ million for KrÃ¸ldrup 10 years ago was a hell of a lot of money. Likewise the wages Ginola must have briefly commanded

٤ million these days will only buy you one of Shane Long's boots.

I was going to save Bakayoko for when a "worst ever players list" comes out. Claus Thomsen and Marc Hottiger, Mitch Ward and Danny Williamson could join Bakayoko.

To be fair to Baka, he did score two crucial goals in a relegation six-pointer at Ewood Park. The only thing keeping Gazza off my list was a sympathy vote.

Dominic... I forgot about those guys, God we've had some serious shite over the years, haven't we?

One of the least talented footballers I have seen at Everton with the greatest ever shovel foot shot on him, couldn't pass, couldn't run and apart from that goal to keep us alive, he couldn't shoot either.

Howard Kendall on his third stint signed Carl Tiler, Mitch Ward, Danny Williamson and Tony Thomas, oh and Mikal Madar who will be best remembered for being a moody bastard and missing the worst open goal at the Kop End ever. All I can say is "Fucking hell, Howard mate, who was doing your scouting?"

He did bring Don Hutchison in, had to get one right, I suppose, and very briefly Tommy Myhre who for a while we thought would be a 10-year replacement for big Neville but went downhill quicker than a turbo-charged skateboard.

Mark Pierpoint
28 Posted 28/03/2015 at 08:47:45
Maybe a tad unfair on Kone. I think he may well develop some sort of partnership with Lukaku. He has looked good playing off the big man, or at centre-forward with Lukaku playing wider. He is never going to be a first team regular though I doubt.

Let's be honest, the guy had solid pedigree for the money. Scored goals, albeit for weaker teams, in several leagues including 13 for Wigan. That is what you get for ٤m.

Shame for him that age is not on his side...