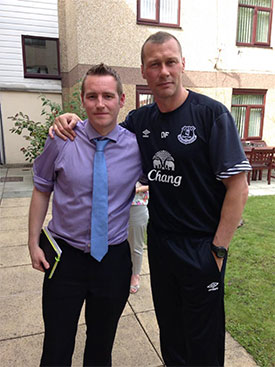 With the man himself, Duncan Ferguson

I’ve never been so grateful to a boss for letting me slip out of the office for a few hours as I was when I had the opportunity to join in a round-table interview with Duncan Ferguson at The Lilly Centre, a breast cancer support charity, not at all far from Goodison Park. I was in my car just taking a quick phone call when I looked up and saw Big Dunc in his Everton training attire march past me and into the Lilly Centre. I followed a few minutes later and was ushered into a small room where I joined a few of the other excited Evertonians from fan websites, waiting to interview Duncan whilst he chatted with many of the guys from The Lilly Centre. It felt like quite a privilege, especially given how private Duncan was over the years as a player.

Listen to the full interview

As Evertonians, we have gotten to know of the legend that is Duncan Ferguson. With all he’s stood for on the pitch (or getting sent off it), the human side of Duncan is as warm and compassionate a gentleman as you can wish to meet, and it was a pleasure to sit in his company for 15 minutes or so. Naturally the questions moved towards the upcoming testimonial game against Villarreal.

“I’m proud that the club thinks of me in such a way that they could honour me with a testimonial. I still played nine years ago and I was gobsmacked to be honest with you. I didn’t see it comin’! The manager pulled me aside and said that it was for the service I gave to the club. I was a player for 10 years and four years of coaching, I was made up. Shocked. A great feeling.” said Duncan in his softly spoken tone, which remains very Scottish.

His tone became animated when asked of that fateful night in a Champions League Qualifier back in 2005 against Sunday’s opponents, Villarreal.

“The referee! That unfair Italian who basically stitched us up didn’t he? It’s as simple as that. I cannee say it plainer than that. In the first 30 seconds of the game I held a player off and he blew for a foul straight away and I thought to myself “Here we go”. He earmarked me straight away and when I headed that ball in he knew it was me and he just blew. If it woulda been anyone else he wouldn’t have blew. He targeted me that night, that’s what I believe. It’s just a joke. A complete shambles. We had them on the ropes and we’d have beaten them that night and they went to the semi-final so they weren’t that bad where they?!”

So what would a younger Duncan Ferguson think of the modern game?

“The way the game is now is a joke. It’s so soft. There’s too many free kicks and the referees get too involved. Why would you want to outlaw tackling? Why is it? Obviously it’s someone's who’s not a defender who’s making up the rules isn’t it. Tackling is a part of the game. You can’t even push someone off the ball now.”

Duncan (and everyone else) was all smiles and laughter when he was asked about playing the last 20 minutes alongside a certain Wayne Rooney on Sunday.

“Try taking 15 minutes off that! Wayne will play a lot longer than me, of course he will. I’m a very proud fella and I donnawanna embarrass myself. I had a very special moment in my last game against West Brom and I nearly botched the whole job up. I wasn’t even supposed to be on penalties. I had cramp in both of my calves and luckily I got a second opportunity and managed to squeeze it in. I don’t want anything to damage that (special moment) but I wanna do the best I can and if I’m good for a few minutes at the end I wanna do something for the fans.”

“I’d be lying if I said to you I didn’t think about these things but to be honest with ya, I’m really enjoying my coaching. What happens in the future? You don’t know, you don’t rule anything out but at the moment I’m really concentrating on my coaching. That’s where I see myself now.”

Duncan’s bond with Evertonians is very well documented and this is well epitomised by the fact that The Lilly Centre is one of Duncan’s chosen charities for his testimonial earnings.

“It means a lot. It’s a local charity, with the real fans, the real people and that’s what I wanted to be a part of ya know!”

And what was the key to igniting that bond? “I think it was when I scored my first goal in a derby game, but I think when I spent a bit of time up north (Barlinnie prison), that wee bit of time up there. I think that support the fans showed me when I was in there. And I still look back with great pride that I got so many letters when I was in there. I’m cutting up just thinking about it.”

After the interview, everybody wanted a piece of Duncan. I managed to get an old photograph of myself and he signed and he was extremely accommodating, very happy for photos to be taken and to sign autographs. I managed to ask him about the season ahead whilst this was going on.

“We’ll do alright. We need to get one or two more in but we’ll do well. We can’t win the league but we’ll do well” he said. He was also asked if Wayne Rooney will return to Everton at some point. “Yep. I’ll drag him back!”

It was brilliant to meet Duncan and what a gentleman he is. Will be great to see him play one last time on Sunday. With the evident passion he has for Everton, he, and the Evertonians, are sure to be emotional.

Tickets, priced at £20 for adults and £10 for under-16s and over 65s, are still available for the game on Sunday, August 2 at Goodison Park against Villarreal, which kicks-off at 3pm. Supporters can purchase tickets by visiting evertonfc.com/eticketing, calling 0151 556 1878 (option 1) or in person by visiting the Park End box office or the city centre ticket facilities in Everton Two, Liverpool One or TicketQuarter, located in Queen Square.

The Club would like to urge fans to buy in advance of the fixture to avoid delays on the day of the game. Fans unable to visit any of the ticket outlets in person before the fixture will receive tickets via the post if ordered before 3pm on Thursday, July 30, alternatively, the Club’s print at home service will be switched at the same time.