Kone comes up with a great hattrick 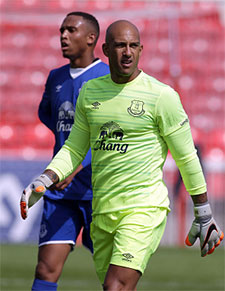 Deulofeu was the first to strike after being released by a great ball from Kone, who then finished with an excellent strike after a nice one-two with Lukaku. Defoe pulled one back on the stroke of half-time. Sunderland got level off a crossed header that Howard failed to move for, but Deulofeu forced an own-goal to restore the Everton lead, soon followed by Lukaku then two more from Kone to complete his hat-trick and a stunning 6-2 scoreline.

Everton started with Howard in goal, as promised by manager Roberto Martinez, despite his recent howlers on high crosses. It was his 400th appearance in his 10th season with Everton. Barry returned after a one-game ban for picking up a second yellow card at the end of the Arsenal game and took the captain's armband in place of the injured Jagielka, while Bryan Oviedo was given a rare (and as it turns out foolhardy) start in place of Brendan Galloway. Coleman was declared fit enough to start after illness.

Everton kicked off but it was Sunderland who were more inventive with Van Aanholt hitting the post in the 4th minute, applause then breaking out in the memory of Howard Kendall. A free kick lofted in high saw the rare sight of Howard venturing out of his goal area to claim the Sunderland set piece.

Lukaku had the first Everton shot on goal, if it can be called that as it was rather feeble. A promising move down the left ended with a poor touch from Lukaku and Sunderland attacked again. Barkley was then able to run at the Sunderland defence, who backed off but his shot flew wide.

More slow build-up and a poor cross-ball by Barkley and Van Aanolt was off to the races, Howard making a good stop with his feet before Sunderland hit the post again through Johnson and the ball was finally cleared. The next Everton attack ended in a corner that was very poor from Barkley, leading to another Sunderland attack.

Defoe was booked for blocking a free-kick illegally after climbing all over Barry. Kone then released Deulofeu whose scuffed shot deflected off a Sunderland defender and then rolled in off Pantilimon's leg to give Everton a very welcome if rare first goal. /p>

Barry played an identical ball to Deulofeu but he had to cross this time and the move ended with a shot wide. Everton looked to have finally woken up but things proved too strenuous for Oviedo who pulled up with a hamstring injury and Galloway replaced him.

A dreadful spell of tippy-tappy saw Barkley repeated play pointless one-touch return balls rather than taking command and the ball eventually ended up back with Howard! But better passing and a great one-two with Lukaku saw a superb left-foot strike from Arouna Kone that flew over Pantilimon for a very classy second goal of the game.

Jack Rodwell replaced the injured Cattermole to a warm round of applause from a Goodison crowd now in generous mood, although Lukaku too generous with his passing, straight to a Sunderland player to breakdown a promising Everton move.

Kone was fouled wide left and Barkley badly overplayed the short pass to Deulofeu. Lukaku then got space to strike hard but straight at Pantilimon. Everton were comfortable and passing the ball quite well, trying to make the opening, with Sunderland defending manfully.

Before the break, Fletcher drove his shot at Howard who had been solid until Defoe got a bouncing ball ahead of Stones that he clipped across the Everton keeper and into the top corner of the Gwladys Street goal with the benefit of a slight defection off Stones to put Sunderland right back in the game.

Barkley tried to set things going forward after the break but his forward pass was too strong for Deulofeu. Barkley then got himself offside in a promising move down the left.

Then, the catastrophe that had been so widely predicted: A cross from Van Aanolt into the 6-yard box, Howard stayed planted on his line as Funes Mori challenged for the cross but Fletcher headed it down and inside corner of the net, Howard ball-watching, flat-footed and gobsmacked.

Deulofeu shamefully pulled another one of his dreadful late dives in a vain attempt to con Marriner and rightly saw the yellow card for it, a pathetic piece of play-acting. He made amends within minutes, a nice early ball in for Lukaku to head home but the ball actually went in off the boot of Coates to put Everton back in the lead.

Played out of defence, a lovely early ball from Deulofeu was finished off with aplomb by Lukaku who went around Pantilimon in style to slot home.

Another Sunderland attack broke down on the edge of Howard's area and Everton surged forward with pace and it was soon 5-2, an excellent finish from Kone after Barkley had picked out McCarthy who played him in nicely for another great left-footed strike from a sharp angle.

Mirallas replaced Deulofeu and it was Ole keep-ball then with a sequence of 45 paces that took the ball all around the pitch until Mirallas could not find anyone with his cutback from the byeline. Everton and the Goodison crowd were loving this, with 20 minutes left to play, as they tried numerous times to play in Kone for his hat-trick.

Mirallas was determined to get on the scoreline, and tried to round Pantilimon but failed to shoot as the defenders gathered to block his path. Everton were in swashbuckling form as Lukaku put in a fine cross with the outside of his left foot for Aruona Kone to power home a splendid header to complete a great hat-trick: 6-2.

Osman replaced Lukaku as the final Everton substitution. Stones was skinned by the impressive Watmore who almost set up a third for Sunderland before Stones returned the compliment with an excellent tackle to give Sunderland their first corner of the game.

Mirallas, desperate for a goal, did brilliantly to create space for a powerful shot that curled just beyond the far post. He looked all set to score from the same spot in the next move but was offside and Watmore got another chance but Howard patted away the chip.

Howard had to make two more good saves as the game entered added time. Watmore continued to cause havoc but could not penetrate the Everton defence and the Blues celebrated a massive win.