Blues blow it at the death 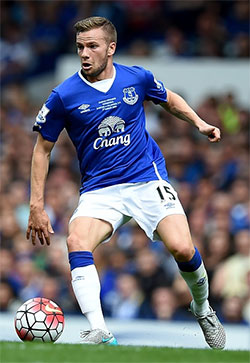 For Everton's first ever trip to Dean Court in the League, Martinez started with his winning line-up once again, Baines still not being risked. Former Everton players, Distin and Gosling were in the home side.

Everton kicked off but played a longer ball forward giving The Cherries an early sight of the ball. Everton attacked but it was former Blue Dan Gosling who had the first scuffed attempt at goal. Lukaku and Deulofeu both dummied a Galloway pass and that saw the Cherries go forward again, Ritchie firing straight at Howard.

Deulofeu had a couple of chances to advance down the right but his crosses were not reaching Blue shirts, while Funes Mori playing long balls forward or crossfield in the blustery wind became guaranteed turnovers. Everton were struggling to take control of the game and King strode in to fire a good shot that required an even better save from Howard. Second warning.

Deulofeu could not get past Daniels but won a corner that Barry curled in, Federici going down when he landed awkwardly and Ref Friend eventually stopped the play, sub Allsop readying but, after a long stoppage, he stayed on.

Everton were still having trouble playing forward, with Bournemouth marking well and pressing their visitors back in determined fashion. Daniels gave away another corner that was played back and ended up almost with Howard. Back-line tippy-tappy appeared briefly before Deulofeu curled one in over Lukaku with Kone firing in and, off the corner, Lukaku forced another save from the possibly injured keeper.

Much better from the Blues and they piled forward in the next attack, Barkley's shot blocked, McCarthy's drive saved, and a fourth corner powered in by Funes Mori, an excellent header from the Argentine defender to give the travelling Blues the lead they needed, and Everton's first League goal from a set-piece this season.

It was a little scrappy after that and the Cherries won their first series of corners, both defended away by the Blues. Barkley was being man-marked and finding it hard to get time on the ball but he did play Deulofeu in down the left. However, the Spaniard took too long to make the cross and lost the ball.

But from the back, Stones picked out Deulofeu, back on the right, and a quick ball on the outside of Lukaku gave him the chance to half-control the ball before firing in an excellent strike from a narrow angle between keeper and post, a superbly taken strike to give the Blues a commanding lead.

Howard came out for a cross but misjudged it and Stones had to get back and clear the bouncing ball off the line. Bournemouth tried tenaciously to get back into the game, giving the Blues something of a test before the break. McCarthy did well to give Deulofeu a great ball to run onto but he slipped as he crossed to Kone.

The home side came out in determined fashion after the break, despite having to swap out their keeper, and it needed a good intervention from Stones as the Cherries committed themselves forward. But Everton countered through Deulofeu and there seemed to be a worrying lack of conviction as the move just fizzled out. Barkley was still maddeningly playing the ball backwards on too many occasions, while Funes Mori's floated balls forward inevitably gave away possession. But they were containing the adventurous Bournemouth attacks effectively without really taking a stranglehold on the game.

Smith looked to round Galloway, but clipped him and the ref called it late after the linesman did not flag, much to the annoyance of the local yokels. It inspired another feisty attack, Daniels lashing in on Howard from wide left but Howard stood firm. At the other end, Coleman whipped in a cross for Lukaku but it was just too far ahead of the big man.

Most of the play, however, was in the Everton half, Richie's attempt deflected away for a corner, claimed by Howard as McCarthy, who had been a tiger all game, went down heavily. Martinez was happy with proceedings, however: no subs as the hour-mark passed.

Ominously, Bournemouth did get behind the Everton defence, Smith lashing an inviting ball across the face of goal, and another corner defended away, but the counter led by Lukaku and Kone was not fruitful. Barkley forced a forward run but Lukaku's return ball was off, as Tom Cleverley replaced McCarthy.

Ritchie, again in a very threatening position, lashed another shot straight at Howard. Another counter was wasted when Deulofeu played a weird lofted ball way too early, and Bournemouth won another corner but it was poorly executed.

More good attacking play from the home side saw Coleman and then Funes Mori making vital interceptions as Everton defended another clean sheet but seemed too lethargic going forward whenever they did reclaim possession. Another corner for the home side, defended away, it seemed, but Smith steadied himself and fired in a tremendous shot off the far post to give them hope of pulling back a 2-goal deficit again. Everton had only themselves to blame as they failed to press Smith.

Smith broke into the area but tripped himself as he ran across Galloway for a big penalty shout, denied by Friend who had to book Gosling for his protests. Lukaku had less of a shout at the other end as the last 10 minutes needed a change of plan from Everton, with Mirallas still languishing on the bench but it was Lennon who replaced Deulofeu.

Bournemouth attacked again off a free-kick and this time King cut in a ball that Stanislas smashed home to deny a lethargic Blues side two vital points. Everton finally woke up a little, but it was too little, too late, and a massive indictment of poor game management by Martinez.

Five minutes of added time meant hope and nervousness in equal measure, but the Blues had been too relaxed throughout the second half and were incapable of upping their game, Bournemouth coming close off yet another corner. Everton were scrambling at times and just so painfully slow when they did get the ball. But the counter finally paid off when after good work from Kone, Barkley spun on a loose ball from Coleman and drove it home for an undeserved but hugely welcome Everton win. Everton fans went crazy, invading the pitch in their jubilation.

Only this is football, this is Everton, and that's not quite how it ended, as Martinez bizarrely chose this moment to switch out Kone for Gibson, thus giving the ref justification for adding at least another minute when the game finally restarted, well beyond the minimum 5 mins. Bournemouth stormed the Everton goal from the restart, a pinpoint cross by that man Smith and Stanislas powered home a stunning header past Starman to deny the Blues a win. It had been a shocking second half from Everton under the circumstances, and probably those celebrations on the pitch costing Everton dear.