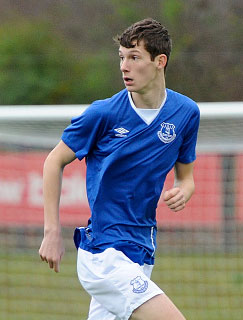 The 17-year-old's move from Gigg Lane was announced last month and, under agreement with the Shakers, he has already turned out for the Blues' U21s side but he is now a fully-fledged Everton player.

The fee for Foulds is officially undisclosed but it believed to be around Ł400,000, presumably with attendance-related add-ons due should his career progress the way both Everton and Bury expect it will.

Foulds, who only signed his first professional contract with Bury last February, follows Brendan Galloway and Mason Holgate to Goodison Park as the latest highly promising central defensive acquisition made by Roberto Martinez.

Sounds like a great clause for small clubs to include when selling to bigger clubs...

Let's hope there are at least two more to follow, one of which should be Howard's replacement.

Welcome Matty Foulds. You're joining the best club in the world. Enjoy it

Trevor Lynes
7 Posted 03/01/2016 at 09:25:23
Martinez has certainly invested in the future but perhaps these kids are promising assets to be developed and sold on at vast profit.

I want to see a couple of already proven top players signed and drafted straight into the first team squad. Players like the one's missed during the last fruitless window, eg; Yarmolenko and even someone similar to Shaquiri.The worth of Jagielka has now become a serious issue as our young defenders are shipping goals.