Delighted George thanks the Evertonians who inspired him 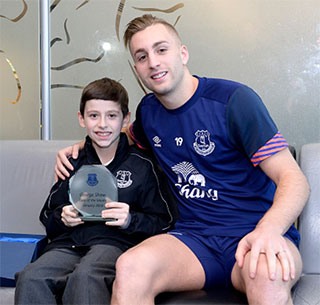 It was Gerard Deulofeu's idea to invite George to Goodison last month.

Nine-year-old George Shaw has thanked the thousands of Evertonians all over the world who have helped to make his dreams come true, after he was invited to Finch Farm to receive his January Goal of the Month award from manager Roberto Martinez.

The young cerebral palsy sufferer, who fought off stiff competition from Ross Barkley, Aaron Lennon and Kevin Mirallas to top a fan poll, has been overwhelmed by the support he has received from Blues supporters.

Following the announcement that George had won the award, he was given the morning off school on Thursday to visit the Club’s training ground and collect the trophy from Martinez, before showing it to the first-team players who missed out on the prize.

Speaking about his morning, George said: “Thank you to everyone who voted because I wouldn't be here now if no-one had voted, so thank you. Everyone has just been amazing, supporting me and voting for me, it's just been brilliant really.

"I didn’t know that I was going to the press conference because my dad kept it a secret from me. I went in, sat down and Roberto came in and said he would like me to come to the front to give me the Goal of the Month award. I never thought I would get a trophy, so it’s just brilliant to have something to be able to show people."

After meeting Roberto, George was introduced to Barkley, Lennon and Mirallas, who presented him with a framed winners' certificate and a football signed by the entire first-team squad.

The special guest also met David Unsworth and the Under-21s players, before being treated to a tour of the Toffees' state-of-the-art training ground.

"I think it’s been a fantastic story to follow," said Martinez. "I think we became aware of it when we saw George in a clip wearing Gerard Deulofeu’s shirt and trying his skills. It was an incredibly strong story to see how powerful football can be and what an incredible supporter and fan of Everton we have.

"I can guarantee you that he’s been the most popular name we’ve had in the dressing room. The players have been talking about George non-stop and I think he has given us a great lesson about how to use football in the right way and how to be a competitor and a fighter.

"They have been really impressed to see what a bright young man George is and that there’s never an excuse for not doing something. We are what our fans allow us to be and I think George brings the perfect example of Everton Football Club." 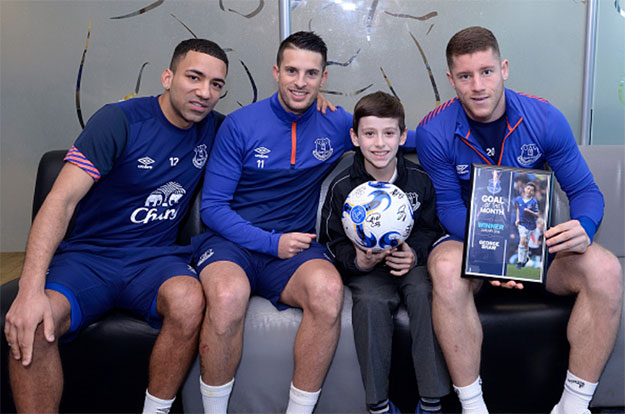 The Shaw family have been stunned by the reaction to the single tweet posted on New Year’s Day of George doing training drills with his dad, Dave, at a local playing field.

They have been receiving messages from people as far afield as Australia, with well-wishers saying that George has proved an inspiration to them.

“It’s just snowballed and snowballed," said Dave. "I can’t put my phone down, it just keeps buzzing and ringing with messages from all over the world. The love that has been shown to George from Everton Football Club and fans from around the world is really amazing.

“George works so hard and he's shown other children that you can do it. We were basically told when George was very young to try to keep him away from sport and football, and that maybe by the time he was 12 he would be in a wheelchair. But George's character has just come through and he's pushed so hard, worked so hard, and this is just reward for him.

“This is a special club, special people work here and they've made him feel really welcome. Today is a moment he will treasure forever.

“To hear what Roberto Martinez had to say about George in the press conference was really humbling. I had a tear in my eye.

"Just to think that the player and the manager know George's name and they know his story is incredible and hopefully it can push us on and push the team on.”

Tony Draper
4 Posted 13/02/2016 at 04:16:58
Everton can be bloody frustrating, because we seem to manage to get so much wrong. Then we do something so simple and yet so clearly right in every respect.

The videos the club has released and which are happening everywhere are things of true joy to watch. George might just be the best signing that Everton could ever make.

Bright, polite and so likeable.
Born, not manufactured.
George Shaw is a Toffee through and through.

I'll never play for Everton, nor score goal of the month at the Street End. So Georges goal means the world to me, he's just a kid with dreams and heroes.... just like me at the age of 9.

George is teaching Everton AND Evertonians a hell of a lot at a VERY crucial time. Our scruffy neighbours did ALL premiership clubs a BIG favour with their 77 minute walkout. Well done.

So with such an ambassador as George and Everton's peerless track record with work in our community, I'm proposing a bunch of things.

Learn and extend the facilities for Evertonians and visiting fans, throughout Goodison Park who have ANY/EVERY form of disability. Because at the age of just 9, George has already given far far more to Everton (in real terms) than most fans do in a lifetime.

The club NEED to have a George Shaw Award for people who have done something inspirational beyond the remit of football. This years prime nomination being Steven Naismith the Norwich striker.

The fans NEED a George Shaw song. And not some crap thing! A proper song fit for a True Blue Legend !

We love our club, they get on our fucking nerves, but when you see what they have done for this fine young lad, it really does make you proud.

Everton FC, is possibly many peoples reason for living, so a story like this, really puts a smile on my face, and a tear in my eye at the same time.

Congratulations to everyone concerned, isn't it great when people pull together in this way.

Steve Woods
6 Posted 13/02/2016 at 09:14:46
Absolutely fantastic. Well done to the club and well done to young George. We should get some banners made up to use at the remaining matches saying "Do it for George" or "Win it for George". Similar chants might well keep the term inspired and focused too!