A lucky team of young Evertonians will take over Goodison Park on Saturday as the Blues celebrate the return of the popular Junior Fan Day.

The visit of Arsenal is dedicated entirely to Everton’s youngest generation of supporters and will see a mini team of helpers joining Goodison’s matchday team – spanning from the press box to the Fan Zone, and even the pitch!

One of the stars of the show will be mini Roberto – seven-year-old Regan – who will be shadowing the Everton boss and even began his matchday preparations early by joining Roberto Martinez at his press conference on Thursday.

Gerard Deulofeu also met his mini-me at the training ground this week with 7-year-old Thomas keen to show the magic winger his pitch perfect free-kick that helped him to secure his matchday role!

Mini kitman Adam also visited Finch Farm to meet up with Everton’s Jimmy Martin and help get the kit ready for the first-team. The 8-year-old will return to Goodison bright and early on Saturday to make sure the kit is laid out in the home dressing room, ready for the players’ arrival.

Speaking about Junior Fan Day, Martinez said: “It’s a good initiative that we’ve enjoyed in previous seasons. It shows that we care about the new generation, the new group of young Evertonians coming to Goodison. They make Goodison a younger place and a place full of energy and we’re very much looking forward to it.”

There will be an extra snapper on hand to capture the action as the Blues take on the Gunners with mini photographer Lucy trying out life behind the lens, whilst evertontv will welcome a new member to the team as budding reporter Will, aged 10, takes a seat in the press box to craft his very own match report.

There will be an extra pair of eyes in the matchday control room as 10-year-old George shadows the safety team, and the Fan Zone will welcome young talent to the stage with 10-year-old Sophie trying out her hand at being a presenter. 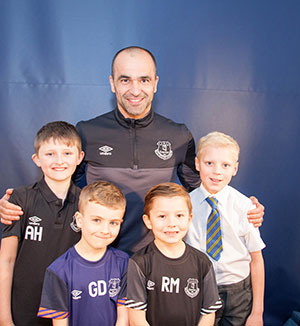 Meanwhile 12-year-old Sam will give a helping hand to hosts in the corporate lounges as they interview special guests, before taking his seat in the dugout to introduce the teams to a packed Goodison Park.

On the pitch, the match officials will be accompanied by young Blues Charlie, Tyler, Harry and Christopher for the warm-up and to lead the teams onto the pitch.

And, for the first time in the history of Junior Fan Day, we have four very special members of the mini matchday team – the Junior Drifters. Legendary soul act, The Drifters, will be performing on the Goodison Park turf at half time and will be joined by Mia, Caitlin, Ashley and Charlie from Kirkby-based dance school, the Leah Macdonald School of Dance. The Junior Drifters will dance alongside the legendary musical quartet.

It’s not just the mini matchday team that will be enjoying a special day at Goodison on Saturday, with the Club also welcoming 10 young Season Ticket holders to escort their heroes onto the pitch ahead of kick-off.

For those not joining the mini-matchday team, there’s plenty of activity before kick-off to keep young fans entertained, with local boyband The Ambition performing live on the Fan Zone stage and one of the world’s greatest football freestylers John Farnworth showcasing his skills in the Fan Zone and Matchday Hub.

Young fans can also take part in coaching sessions delivered by Everton in the Community in the Matchday Hub, get their faces painted, try their hand at games tables and
and face painting, games tables, bouncy castles.

Junior fans are hugely important to the Club. To reflect that fact, Season Tickets for 2016/17 will remain just Ł95 for kids, whilst junior Season Tickets have been reduced by Ł50 to Ł149 – with the age range extended by two years.


John Austin
1 Posted 18/03/2016 at 21:40:40
Great initiative. Something these young blues will cherish for ever. Now it's down to the players to give them a game to remember. COYB