Too soon to tell whether Jagielka's season is over 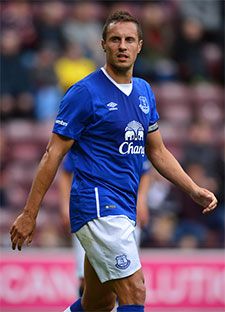 Roberto Martinez has confirmed that he will be without a trio of injured players as well as the suspended Ramiro Funes Mori for the visit of Bournemouth this weekend.

Phil Jagielka (hamstring), Seamus Coleman (hamstring) and Gareth Barry (groin) are all ruled out for the Blues' penultimate home game of the campaign but Martinez says it's too early to tell whether the captain will miss the remainder of the season, or whether his Euro2016 chances are under threat.

Jagielka played all 90-plus minutes of Everton's ill-fated FA Cup semi-final at Wembley last Saturday despite not having fully recovered from a hamstring strain.

“We picked up a few injuries and suspensions. We pushed ourselves to the maximum. I think someone like Phil Jagielka who got through the game probably had no right to be fully fit.

“Obviously he's going to be missing now for the next few weeks few games but I think it's too early to know if he's going to miss the rest of the season or if he'll be available for the last game the campaign.

“Gareth Barry will [also] be missing, Seamus Coleman will be missing and Ramiro Funes Mori is in the second game of his suspension so, clearly, we're going to have a little bit of a weak back four but I think it's been the case for most of the season so we'll have a real opportunity for some young player to come along.”

The manager and the senior player's have talked up a good game all season and have failed to deliver.

I really hope to see lots of " Martinez Out" banners at the game.

Anything other than that just disappoints me

He's been with us nearly a decade like Baines. Should have got the armband much earlier.

I think he has been put in a quite ridiculous position by the manager and his performance on Saturday was typical of him. He marshalled it all.

Probably only has one or two seasons left but he will always raise a smile mostly for being the contributing factor in our strong defence before 2014 and those performances in 2009.