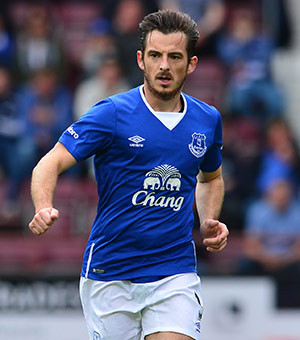 Leighton Baines marked his 500th appearance with a second-half goal that earned Everton only their fifth home league victory of the season as supporters mounted their most visible protests yet against Roberto Martinez's continued tenure.

The England left back swept home a lovely finish to what was, arguably, the Blues' best move of the match with 25 minutes to go to end a sequence of seven matches without a win in all competitions dating back to the middle of last month.

While the three points will be welcomed by beleaguered Martinez, after the emotional tributes to the victims and families of the Hillsborough disaster before kick-off, the match itself was played out in very meaningless, end-of-season fashion against a backdrop of apathy from the home fans and scores of empty seats in the Park and Gwladys Street ends.

To further emphasise the level of supporter discontent, a noisy plane trailing the words “Time to go Roberto NSNO” flew over Goodison Park towards the end of a flat first half that had, nevertheless, seen two goals.

Everton, with mystery man Oumar Niasse making his first start as a lone striker almost three months to the day since he arrived for £13.5m and young defender Matthew Pennington at centre half, had started on the front foot but created very little until Tom Cleverley fashioned the opener.

Picking up Ross Barkley's neat pass into the box, the midfielder shimmied to side of his marker and fired a low shot past Artur Boruc in the Bournemouth goal with six minutes on the clock.

With depressing inevitability, however, the Cherries were level inside two minutes, albeit in somewhat controversial circumstances. Referee Neil Swarbrick saw nothing illegal in Callum Wilson's apparent push on Pennington near the touchline and the striker advanced to the byline and pulled the ball back where Marc Pugh was left unmarked to capitalise on poor defending and eventually force a shot home via Tim Howard's body.

Having responded so well from going a goal, Bournemouth then assumed greater control of proceedings. passing the ball about with confidence and setting the tempo while Everton toiled. After a poor give-away by Niasse, Matt Ritchie saw a deflected shot clear the bar and Steve Cook headed wide at the back post from the resulting corner as Howe's men threatened again.

Later in the half, as Niasse briefly came to life after an anonymous half hour, Barkley took advantage of strong work by the Senegalese striker but blazed over at the end of a surging run and then saw another shot saved well by Boruc after Niasse had played him in again a few minutes later.

Evertonians unveiled a large banner paying tribute to the victims of the Hillsborough disaster, their families and Everton's support for them.

The second half would eventually improve on the fare of the first 45 minutes — it couldn't have been much worse — but it was the visitors who threatened to take the lead first. Josh King fired wide from oceans of space in the Blues' area just before the half hour mark, Wilson drove a shot into the side-netting and Ritchie curled a tame free kick into Howard's arms after Darron Gibson had tripped him just outside the area.

With the wholly unimpressive Niasse having departed and Romelu Lukaku introduced four minutes earlier, Everton carved out what would prove to be the winner in the 64th minute. The ball was worked wide to Aaron Lennon wide on the right, his low cross skidded behind Cleverley in the centre but Baines popped up unmarked to despatch a crisp effort into the roof of the net.

Howe's men pressed in response and, after Pennington had done well to block a shot by substitute Benik Afobe, Bournemouth probably should have equalised again when the same player found himself unmarked in front of goal but he headed over the bar with just Howard to beat from close range.

A nervy close by a Blues side all too familiar with conceding late goals saw the Cherries probe in vain for a second goal but Ritchie drilled their best chance wide from the edge of the box and Everton held out. While Tony Hibbert had played the entire second half, promising youngster Kieran Dowell was only given five minutes at the end, which seemed baffling given the context of the match.

The 2-1 win is a result that Martinez will obviously embrace after a torrid run of results and it's one that keeps alive hopes of finishing in the top half of the table but it was a flat performance overall that will have done little to satisfy the Catalan's critics. If this was his attempt at convincing those who feel his time is up that better times are on the horizon, it was desperately unconvincing, even allowing for the changes to the line-up.

Apart from his part in the goal where he was perhaps guilty of not playing to the whistle, Pennington was accomplished and tidy on his full debut but Besic looked out of place again as a makeshift fullback and it said something that old man Hibbert was probably the best player in a blue shirt in the second period.

A group of fans remained behind long after the final whistle to voice their opinion of Martinez from the stands with chants and banners calling on him to go, a protest that was witnessed by new major shareholder Farhad Moshiri as he made his way out of the ground on his way back to London.

What he made of the library-like atmosphere and the supporter unrest is anyone's guess but his next trip to Goodison for the season finale could be just as uncomfortable if no decision regarding the future as been made public by then.


Martin Nicholls
1 Posted 01/05/2016 at 11:13:51
Once again, a fair summary Lyndon. In particular I agree your comments about the bizarre timing of the introduction of Kieran Dowell. I call it bizarre but of course it's what we've come to expect from our current manager. Thanks for again summoning the enthusiasm to produce you report.
Brent Stephens
2 Posted 01/05/2016 at 13:11:30
Good piece, Lyndon. As you say, "a flat performance overall that will have done little to satisfy the Catalan's critics. If this was his attempt at convincing those who feel his time is up that better times are on the horizon, it was desperately unconvincing, even allowing for the changes to the line-up."

The timing of Dowell's appearance was indeed bizarre, unless it was just to give him the taste of being on the pitch with the first X1.

Alan Bodell
3 Posted 01/05/2016 at 14:29:53
When this idiot goes our next manager has a gem with Tom Davies.
Forget this season and our future is bright with our youth and hopefully our next manager spending wisely, oh almost forgot to say Martinez just go. adios, asta la vista and finally fuck right off.
Steve Brown
4 Posted 01/05/2016 at 14:44:25
We have some real quality youngsters and I'd like to see Dowell, Davies and Pennington given game time before this season end. Why not? The senior pros have been a disgrace by and large so drop them.
Steve Brown
5 Posted 01/05/2016 at 14:46:53
Also, it was a pleasure to see a proper defender in our back line. Well done to Hibbo, rolling back the years - why didnt he play in our last two games at RB instead of Besic?
Peter Cummings
6 Posted 01/05/2016 at 16:35:28
As much as we all want Leicester to take the title, hope it's not us who hand the trophy to them this week, it will really be a kick in the teeth after losing the chance of two cup finals in a season ruined by injury to key players undelined by the worst managerial performance in the history of Everton Football Club.

Our potential embarrassment will of course be spared tomorrow at Stamford Bridge if Spurs don't win, if they don't its the only time I will want us to lose, or draw, our next game,

Gibson was my Everton man of the match against Southampton. How we didn't lose that one I don't know.

Southampton must have felt they had been mugged.

The silence around Goodison was deafening.

I have chosen to stay away since as a one man protest, for the rest of the season.

I'll be back next season as usual provided Roberto has gone.