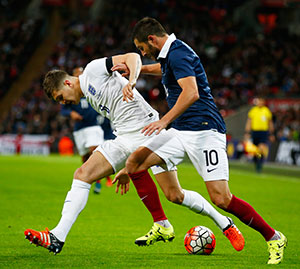 John Stones was in the starting XI for England's friendly against Turkey at the Etihad Stadium while Ross Barkley was an unused substitute.

The national team begin the final preparations for Euro2016 with the match at the Etihad Stadium and both Everton players are expected to be in the final squad that travels to France for next month's tournament.

The home side eventually won 2-1 but not before Hakan Calhanoglu has erased Harry Kane's opener in the first half.

Jamie Vardy came off the bench to grab the winner with seven minutes to go, notching his third successive international goal and enhancing his claims to be a starter when the European Championships kick off.

Elsewhere, still officially contracted to Everton until July, Tim Howard earned his 92nd cap for the USA in their victory over Puerto Rico, becoming the most capped Toffees player in the club's history, surpassing Neville Southall.


Jakub Kollar
1 Posted 22/05/2016 at 16:54:52
I just don't get this. As an Everton fan I should be proud, however seeing Stones in starting XI after tragicomedy which was this season is quite surprising.
Ben Dyke
2 Posted 22/05/2016 at 17:05:17
Not so surprised about Stones being given a run out. He's very clearly rated by the management already and could start the tournament proper maybe, even though Cahill and Smalling prob first choice at the moment with greater experience.
Also not surprising that Jags is not included. He's a good Premier League central defender but lacks the height for me to be truly international class.
Bit surprised Baines not considered. I think recently he was getting back to his best especially with the Martinez monkey being lifted off his back.
Barkley can be infuriating at times for us but with better players around him, he's a good attacking surprise package to have in the team/squad.
John Graham
3 Posted 22/05/2016 at 17:11:12
Looks a good team. Stones deserves to be there, much better than Smalling.
Minik Hansen
4 Posted 22/05/2016 at 17:11:26
No doubt Stones has had pressure on him, I think he'll hit the ground running in this tournament, now that the focus is outside the club. Come back stronger, Stones, I bet any new manager then will believe in you.
Tony Rice
5 Posted 22/05/2016 at 17:17:18
Wouldn't be surprised to see Jags be in the squad if any injuries occur prior to the tournament
James Hughes
6 Posted 22/05/2016 at 17:28:28
ITV panelists were raving about the class and ability Stones possesses and how a good coach could really help him.
Mark Ryan
7 Posted 22/05/2016 at 17:56:47
We'll never see him playing for us again if he has a good tournament. He'll be sold for silly money.

It's all very sad. Martinez has ruined his view of Everton. I hope he stays. I hope Lukaku goes for silly money.

Danny Broderick
8 Posted 22/05/2016 at 18:13:05
Stones has all the raw ingredients. He was back to himself against Norwich last week. Hopefully the likes of Gary Neville will be working with him in the championships. If we can get a decent manager in next, one that knows how to organise a defence, we could have a hell of a defender. It's a big season for Stones next year.
Colin Glassar
9 Posted 22/05/2016 at 19:12:03
Very solid game by Stonesy. He looked relaxed and confident and even told Cahill to get lost at the very end.
Tony Hill
10 Posted 22/05/2016 at 19:57:28
Alli was poor I thought, his nice slot through for the offside goal apart. Wilshere was plainly unfit and had an ineffective game too. We won't hear about any of that though because it isn't in the script.

I like watching England and wish them well but Hodgson is obviously hopeless.

As for Stones, I thought he did ok but my god he needs someone to teach him the dark arts and to develop his fantastic talent. Stam perhaps.

He's good on the ball, and I can see where the hype is coming from, but defensively he is just not there yet. I still think the hype has got him into the squad because, as an Evertonian, I think Jags is the better defender, and has had a better season than Stones – only just, mind, because defensively we were gash.

Can I think of a better centre back for Everton?

Because he's had on of the worst defensive coaches in England for the past 3 seasons. Is that not obvious? Jagielka, Baines, Coleman and Howard made up one of he best defenses in England. Then Martinez comes in, and they become one of the worst. Only change being Distin replaced by Stones.

Jay Harris
23 Posted 23/05/2016 at 05:01:51
I'm with you Tony Labby was the best I have seen and my dad also said TJ Jones was the best player he had seen since Tommy Lawton and Dixie.
Martin Nicholls
24 Posted 23/05/2016 at 10:29:33
I agree with those who rate Labby as the best we've seen, although I'm well aware of TG's reputation. I also agree with those who recognise Stones's potential but feel that, on last season's form, Jags should be in ahead of him.

My initial thought was that Ross shouldn't be in England squad until I saw the crocks (Wilshere and donkey Henderson) and those (eg, Sterling) selected out of big club favouritism, and then thought "Why not?"

Don Alexander
25 Posted 23/05/2016 at 12:33:25
The fact is the English players available don't make me confident of a tournament victory anytime soon. And when those right next to him seemingly mistrust Stones on positioning it doesn't bode well, even if he has way more class when in possession.
Jim Hardin
26 Posted 23/05/2016 at 13:40:15
David,

Maybe, but I am not talking about the back four defending as a unit or those things where Everton were found out under Martinez. I agree they all fell victim to that. However, Everton wasn't his first club and the things he was being told in the game looked to be basics that would have been taught while he was much younger. He really looks lost inside the 6 on defense.

There is naive and then there is stubborn. Young Stones is on the edge of being too old and having played too many games to be the former, and just old enough to be the latter. Unfortunately, once in the latter category, it is hard to get a player to change his or her ways. We can only hope a new manager can get him sorted out.

Dave Abrahams
27 Posted 23/05/2016 at 15:12:51
Tony Hill, Pete Gunby and Jay Harris, your dads, like me were privileged to have seen the great T G Jones, I saw him through the eyes of a very young boy, I was mesmerised by T G, he never wasted a ball, great free kick artist, never wasted a tackle one went to ground, waited then made his move taking the ball off his opponent, like candy off a baby.

The pitches were different then to now, mud heaps, yet T G came off the pitch with his shorts as spotless as when he came on.

I should have seen a lot more of Tommy but he was left out of the team by Theo Kelly, the acting manager of Everton, most possibly something that had nothing to do with ability, and eventually he went to Bangor town as player manager,

Geoff Williams
28 Posted 23/05/2016 at 15:14:57
I thought this was a poor England performance. I can't believe Rose was man of the match. Baines and Jagielka are head and shoulders better than the players who have taken their places. Of the players on view I'd only take Dier, Kane or Vardy to Everton.
Guy Hastings
29 Posted 23/05/2016 at 15:32:41
TG Jones, my dad's favourite player - ever.
Steavey Buckley
30 Posted 23/05/2016 at 15:44:16
Roy Hodgson has a touch of madness like Martinez, and plays strikers out of position on the wings. He started the premier league's top goal scorer, Vardy, on that left wing. I call that a real madness.