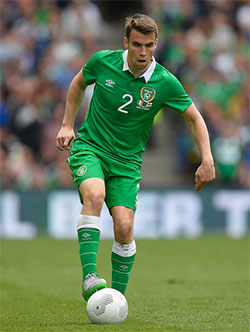 Both Coleman and James McCarthy started in what turned out to be an even game, albeit one that Martin O'Neill's men will feel disappointed not to have won.

Jeff Hendrick curled an excellent effort off the bar and both John O'Shea and Shane Long came within inches of connecting in front of goal as the Irish carved out the better chances in the first half.

It was Coleman's trickery in the Sweden box and a delicately chipped cross that laid on the first goal, however, with Wes Hoolahan hammering home a crisp first-time shot.

The goal sparked Sweden into action and after Danny Rudolph had made an excellent one-handed save to turn a dreadful miskick from an Ireland defender away from goal, Zlatan Ibrahimovich forced the equaliser with 20 minutes left.

The striker crossed from the byline and Clark could only head into his own net with Seb Larsson lunging to convert behind him.

McCarthy, who had a quiet game overall, was substituted with five minutes to go in favour of his Everton team-mate Aiden McGeady but although the Irish restricted Sweden to no shots on target in the entire 90 minutes, they had to settle for a point.

Meanwhile, Romelu Lukaku and highly-fancied Belgium play Italy in the game of the day in the evening game in Lyon.

Lukaku has been in rich scoring form in the Red Devils' recent friendlies and is likely to be named up front by Marc Wilmots.

Good luck to Seamus and Macca - and of course the ROI.

'You wouldn't want to be on the receiving end of Roy Keane's stare' will be my moment to crack open the beers for real.

Tony Hill
6 Posted 13/06/2016 at 11:04:18
Yes good luck to ROI, since our English lads won't get a game this is where our interest lies. I'm afraid I'm not thinking of Lukaku as a Blue at the moment.
Colin Glassar
7 Posted 13/06/2016 at 11:12:13
Good luck to both Irish teams and the Welsh.
Brian Hennessy
8 Posted 13/06/2016 at 11:19:00
Good chance our former Blue Shane Duffy will get the nod after his display against the Dutch
Frank Wade
9 Posted 13/06/2016 at 13:05:51
Interesting quote from Seamus Coleman in the Sunday Times, Irish version, talking about the Irish squad. "They are great lads. You could trust them with your life. As an example, if you make a mistake, Jonny Walters in front of you, he is going to break his back to get back for you. Shane Long will make a bad ball into a good ball and that is all-important. There is nobody in the squad who thinks they are higher than anyone else."

Anyone else reading between the lines ?

Andy Meighan
13 Posted 13/06/2016 at 15:39:24
I hope Seamus gets the winner for them. At least our club will still be represented because I can't really see that shite England getting out of the group anyway. Their moronic fans might do the job for them.

I'd love to see the gobs on Milner, Henderson and Lallana when Slovakia put the final nail in the coffin. Funny isn't it. For an ordinary side league wise they are always represented at England level quite well. I wonder why that is...

He is showing he is not Charlie big potatoes.

Still, much to play for.

No-one will sign him at this rate... clever bigger.

On another note. What about Lukaku for the Belgians?!?! Dear oh dear... We ll be lucky to get our money back. As Lineker said... Abject â€” Summed him up to be honest. Hate to repeat myself but vastly vastly overrated.

The Irish are normally good to take one scalp at least and I thought last night Sweden were lucky not to have conceded at least 3!

I dunno who the three old giffers were in the studio, but they absolutely hammered McCarthy. One of them said that he'd pretty much got Martinez sacked. They said he had the physical ability, but not the mental ability to be a top player.

The three giffers in the Studio were none other than, on the left Johnny Giles, ex Leeds Utd Legend of the late '60s & early '70s. The man in the middle was Liam Brady, ex Arsenal and Sampdoria legend from the 70s. The dude on the right was, Eamonn Dunphy, ex Fulham, no great shakes player of the late '60s, but highly controversial journalist, who sticks the boot in ruthlessly in his criticism.

I found it funny, but spot on when he said McCarthy spends his time 'waving his hands like a Traffic Cop'.
anybody over 60 will remember Giles and Brady, who left McCarthy in the shadow! Check them out on YouTube!

Have a good tournament, and great news about Koeman. I can't wait for the new season, COYB!