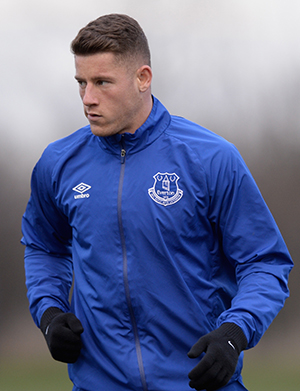 Everton had to be content with a point from the first game of the Ronald Koeman era as Erik Lamela's second-half header cancelled out Ross Barkley's early strike to earn Tottenham a draw at Goodison Park.

The Blues, playing without injured duo Romelu Lukaku and Seamus Coleman, got off to the ideal start when Kevin Mirallas was fouled by Victor Wanyama in a dangerous area outside the Spurs box and Barkley bounced a wicked shot off the resulting free kick beyond the reach of Hugo Lloris with less than five minutes gone.

Everton nearly doubled their lead with a quarter of an hour gone when Wanyama felled Mirallas again in a deeper area of the field and Lloris had to be alert to push Phil Jagielka's looping header over the bar.

With tireless pressing of the ball in their own half, Koeman's side were refusing to allow Tottenham to work their way through to the penalty area but when they did, they found Everton's three-man central defence in stubborn mood.

Jagielka blocked superbly to deny Eriksen early on and the Dane had the visitors' only other effort of note midway through the half but Maarten Stekelenburg handled it comfortably.

At the other end meanwhile, Mirallas and Gerard Deulofeu were a constant threat on the counter-attack. The pair combined to fashion a chance for the Belgian on the 20th minute but the angle was too tight and Mirallas's shot was turned behind by the goalkeeper.

And, after Lloris had to go off to be replaced Michel Vorm, Deulofeu seized on a poor backpass by Jan Vertongen and raced into a one-on-one situation but the substitute ‘keeper did well to close the angle and block the Spaniard's shot.

Tottenham were a different proposition in the second half and they started the second half purposefully, their options then bolstered by the introduction of new signing Vincent Janssen.

Dele Alli skied one shot from the Dutchman's cutback before Spurs got their equaliser just before the hour mark. A dangerous cross from the right was attacked by Lamela who got in front of Mason Holgate to steer a header past Stekelenburg.

As Everton's high-intensity pressure game eventually took its toll and the home players tired, Tottenham upped their attempts to grab a winner but were foiled twice in superb fashion by Stekelenburg.

First he denied Janssen from close range and then he made an excellent reaction save to palm Lamela's deflected shot over his bar with seven minutes to go.

The result, arugably a fair one on the day, means that Everton have now drawn their last four opening-day fixtures but there was much to be optimistic about for home fans looking for an improvement on last season, particularly at Goodison Park.