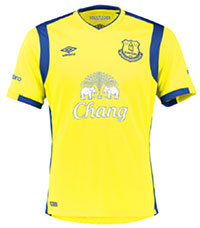 The club unveiled the second change strip for the 2016-17 at an event at Everton One this evening.

The new third kit is evocative of the away kit from the 2013-14 campaign, featuring a bright yellow jersey and blue accents on the shoulders and cuffs.

The shorts are Everton blue with yellow panel while the socks are yellow with blue stripes.

The team will sport the new kit for the first time at West Bromwich Albion this weekend.

I wouldn't be arsed if they played wearing bin-bags, as long as they get down to the task in hand.

All the haters – don't buy it; you're not obligated to... easy really.

However, this yellow will be a big grower as the two main colours of blue and yellow always compliment each other and these are strong colours too.

I don't like the blue on it (except on the cuffs). Basically just a home shirt but yellow where blue and small blue splashes on the cuffs – that would have been nice.

As to all the comments regarding Chang and Umbro. I agree. New shirt sponsor, and kit manufacturer needed.

Sort of..but another way of looking at it is that if you love it and you're wearing one, you're not actually looking at it.

But if you are a 'hater', you won't be wearing one yet will be forced to look at all those (puddins) who are.

That bright yellow (in some quarters it's actually called "safety green") is very, very popular with the 18 and under crowd here in the States.

That Alan Ball kit... could kit designers not study that and use it as the template? Timeless perfection.

If we are away from home and the home side plays in blue, then we change to our black away kit.

Great colour, bold and bright, I personally won't buy it for me but I will have it for my lads, I'm sure it will look the part.

Agree with some comments about Umbro and Chang, both shire logos.

Our Nike kits were much better, I was also happy to buy the kids the tracksuits etc too, I will always buy Everton kits for my kids, even if they were Dunlop, but it would be nice to be Nike, Adidas or Under Armour.

Let's forget about new kits until we finalize an improved squad.

Well hard to understand (for me) why but..I think you get a pass being American.

That's not a dig by the way, what I mean is..um..I'm guessing tradition isn't really a big deal over there..in the same way as it is here.

Sorry, I'm not describing this well am I.

All I mean is I can say 100% definitely, that if I was put in charge of Everton just for tomorrow, there's no chance by Thursday, we'd be called 'The Everton Wolverine Pirate Hawks' or that Z-Cars would have been replaced by this Link

I was hoping for a Koeman inspired dutch orange and navy affair. Sadly that seems beyond the mental capacity of whoever designed this rubbish. Looks like the Leeds United kit of about 10 years ago only worse.

In fact the whole Chang deal is amateurish. Thankfully the deal expires at the end of this season and I can't see Moshiri wanting to keep them on.

A new valuable sponsorship deal would allow us to fast track the squad refresh and get around the FFP a little easier.

Love it actually. Better than that green monstrosity.

Everton are in that mold.

I'm definitely looking at this through a different lens, only a decade or so of support and admittedly not having that culture and upbringing of Everton timeless / institution of English football.

We all have our faults.

I liken it to this. If the Red Sox messed with their "look", no matter how sleek or modern or trendy, I'd be like, "Get the fuck out of here! Crap! You don't mess with it!"

I just come at this from an entirely different perspective.

It's got to be Guns n' Roses Welcome to the Jungle.

Fuckin' song is played a bazillion times at every American sporting event, usually accompanied by a smoke machine and a wild light show.

My gag reflex kicks in every single time

Does anyone drink the stuff anyway?

The only reason I can think of it that chang insisted their logo is white???

As an interim measure I think the logo should be in yellow.

Here's me taking the piss out of my redshite mates for their monstrosity and then this lands on our plate....

Maybe it looks better in real life than on a picture with a white background. Will wait and see I suppose. It'll never make it to Scotland to be sold anyway, so I won't get it here

As for this one, ok but reminds me of the Ukraine national shirt. Chang in white? Needs a strong Royal Blue outline really!

Great colours, great kit, best we can get from Umbro and Chang.