Everton battle back to grab another late equaliser 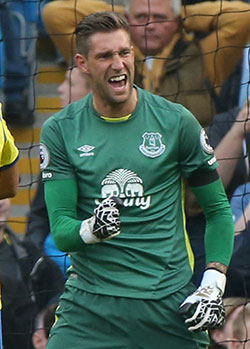 Stekelenburg's moment of madness allowed United to take a first-half lead but he was rescued by a Fellaini error at the other end
Everton had to rally from a goal behind for the eighth time this season but were rewarded with an 89th-minute penalty.

Playing with three changes to the team that had started against Southampton – Phil Jagielka, Ross Barkley and Aaron Lennon made way for Ramiro Funes Mori, Tom Cleverley and Kevin Mirallas – the Blues found themselves behind shortly before half time when Maarten Stekelenburg suffered an inexplicable rush of blood to the head and was lobbed by Zlatan Ibrahimovic as he charged out of his penalty area.

The Swede's goal broke the deadlock in what had been a tight contest between two teams struggling to make inroads into the opposition penalty area and it forced Ronald Koeman's side to increase their intensity in the second half.

They were initially foiled by David de Gea in the Manchester United goal who made an excellent reflex save to deny Kevin Mirallas 10 minutes after half-time at the end of what was arguably Everton's best move of the match thus far.

Anthony Martial went close at the other end when his deflected shot spun inches past the far post before Ander Herrera hammered a shot off the crossbar but, after Enner Valencia had come on the injured Yannick Bolasie and Mason Holgate had replaced Seamus Coleman for the same reason, it was De Gea who was the busier 'keeper in the closing stages.

The Spaniard batted a looping header away from the top corner of his goal and saved low from Enner Valencia but he was finally beaten with a minute left of the regulation 90 when the home side's momentum finally told.

With the clock ticking down, substitute Marouane Fellaini felled Gueye in the area and Leighton Barnes slotted his spot-kick past De Gea's dive to earn a point.

It's a result that wasn't enough to take Koeman's men back above West Bromwich Albion in the table but it at least preserved their unbeaten home record and established a benchmark for the kind of commitment and spirit that is required and that has been lacking in recent performances.