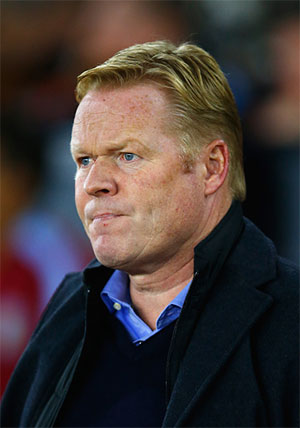 Everton lost their fifth consecutive away game and extended their miserable run of results to just one win in ten as they squandered a 17th-minute lead at Vicarage Road.

Romelu Lukaku ended a goal drought stretching back to the end of October, the last time the Blues registered a victory, when he collected Gareth Barry's impressive ball over the Watford defence and slotted past Heurelho Gomes but awful defending saw the home side swing the game in the other direction.

Walter Mazzarri's side levelled nine minutes before the break and scored from two set-pieces in the second half to put themselves into what proved to be an unassailable lead despite Lukaku's late header that gave the travelling Blues fans vain hope.

Ronald Koeman made two changes to the side that drew with Manchester United last weekend, bringing Gerard Deulofeu in for the injured Yannick Bolasie and replacing Tom Cleverley with James McCarthy in midfield. His side responded with slighter greater intensity in the early going and took the lead when Barry picked Lukaku out beautifully.

The Belgian chested the ball down and tucked it under the goalkeeper, setting the platform for what could have been a much-needed, morale-boosting win.

Instead, it prompted a response from Watford and Stefano Okaka forced the first save from Maarten Stekelenburg with a low shot from Troy Deeney's ball inside. And Deeney was involved in the equaliser when he easily out-jumped Ashley Williams and the ball was fed wide to Nordin Amrabat. His low cross found Okaka unmarked in the centre where he heel-flicked it past Stekelenburg to notch his first goal for the Hornets.

It could have been worse before half time but Deeney missed his kick at the far post as Coleman jumped for the ball ahead of him and the teams went into the interval all square.

Everton conceded an equally poor goal from their perspective just before the hour mark following a scrappy start to the second half. Idrissa Gueye chopped Valon Behrami down in a dangerous area wide on the Watford left and from the resulting free kick Sebastian Prödl had an embarrassingly free header to power home and make it 2-1.

2-1 became 3-1 five minutes later after Stekelenburg had got a finger-tips to Britos's unchallenged far-post header. From the resulting corner, Okaka got his head to the ball ahead of Barry and Idrissa Gueye to steer a header into the net via Leighton Baines on the goal line.

No doubt shell-shocked by his team's capitulation, Koeman responded by withdrawing Gueye for Ross Barkley and then Kevin Mirallas for Enner Valencia but while it again had the effect of opening the game up for the Blues' attack, it didn't yield another goal until the 86th minute.

Valencia bent an ambitious effort wide and then planted a header a similar distance past the post before Aaron Lennon came on as the final throw of the dice by the manager.

And it was the winger who provided the assist for Lukaku to grab his second with a cross from the left that the Belgian guided into the corner with his head but it was too little, too late. Valencia had a claim for a penalty ignored despite Britos climbing all over him as the tried to go for a cross, Barkley put a stoppage-time free kick into the ‘keeper's arms, and the home side were able to wind down the clock to register their first win over Everton for 29 years.

The result leaves Koeman searching for answers with his team mired in relegation form heading into the busy festive period. The impressive defensive resilience he appeared to have instilled since taking over from Roberto Martinez has evaporated in recent weeks, with nine goals conceded in three away games, starting with that 5-0 drubbing at Chelsea.