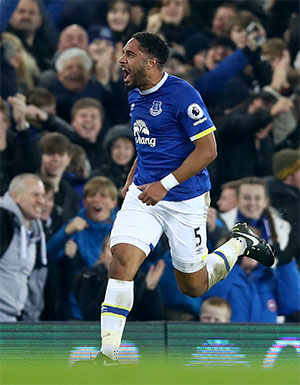 Responsible for the deflection that sent Alexis Sanchez's first-half free kick past his own goalkeeper, Ashley Williams chose the ideal moment to score his first Everton goal with a fine header off a corner
Clive Brunskill/Getty Images

Everton came back from a goal down with a stirring performance to inflict Arsenal's first defeat since the opening day of the season.

Ashley Williams atoned for an error leading to the free kick that gave the Gunners the lead and then the subsequent deflection that took Alexis Sanchez's free kick past Maarten Stekelenburg by heading home the decisive goal from a corner four minutes from the end of regulation time.

It was reward for a markedly improved display from Ronald Koeman's side who played their part in a pulsating encounter under the lights, with a raucous Goodison Park driving them on as they looked to recover from a nervy start and going a goal down after 20 minutes.

Enner Valencia, otherwise a hugely positive addition to the side at the expense of Kevin Mirallas, and then Ross Barkley failed to clear the ball outside their own box and Williams took out his own player in the form of Idrissa Gueye before Phil Jagielka clattered through Francis Coquelin on the edge of the box.

Sanchez fired a low free kick aimed at Williams in the centre of the area which the Welshman couldn't avoid diverting off-course, wrong-footing his goalkeeper who couldn't keep the ball out of his net.

Initially rocked back on their heels, Everton slowly started to assert themselves, with the home fans raising the volume with each crunching tackle and purposeful drive forward, willing the team on in search of the equaliser.

It came after Aaron Lennon had sliced wide at the end of an excellent run and then put a snapshot into the stand, evidence of greater determination from the players to quicken the tempo and put their more fancied opponents under pressure.

Gueye fed the ball out to Leighton Baines on the left and, after turning back inside his marker, the fullback curled a dangerous ball into the six yard box where Seamus Coleman popped up unmarked to glance it into the far corner a minute before the break

Some of Everton's fire was dissipated by the half-time interval and a slip by Coleman 10 minutes into the second half allowed Coquelin to burst away down the Arsenal left but Mezut Özil deposited the resulting cut-back from the byline over the crossbar.

Barkley then flashed a low drive narrowly wide of Petr Cech's far post while Romelu Lukaku powered his way impressively past Gabriel Paulista but the Brazilian recovered well to deflect the Belgian's shot behind for a corner.

With Valencia tiring after tireless work, Koeman threw England U20 striker Dominic Calvert-Lewin on for the Ecuadorian but the next two chances fell to defenders off corners from the right as the match ticked into the final five minutes before stoppage time.

Cech was forced into a reflex save from close range by Jagielka but from the following set-piece, Barkley finally found a Blue shirt unmarked in the centre as Williams rose and bounced a downward header past the ‘keeper to send Goodison Park into celebration.

The jubilation was almost cut short, however, deep into stoppage time as Jagielka was sent off for a second bookable offence and Everton's defence made a near-miraculous escape following the free kick. With the Blues unable to get the ball clear, Sanchez drifted a teasing ball to the back post in search of Olivier Giroud but Stekelenburg pawed it away at full stretch.

Nacho Monreal's volley off the loose ball was stopped by Ramiro Funes Mori, Iwobi's first-time hit from eight yards seemed destined for the net but Baines cleared it off the line to outside of the box where Sanchez went down in a challenge with Mirallas and the clearance sent Lukaku into a foot-race with Hector Bellerin as Cech galloped back from the Everton penalty area.

Lukaku dispossessed the Spaniard and found Barkley but his pass on top Mirallas was too far behind the Belgian and Laurent Kosciely slid the ball off his toe before he could seal the game.

It's a result that lifts them, temporarily perhaps depending on what happens in the Wednesday evening fixtures, back into seventh place but, more importantly, restores some belief among supporters and squad alike ahead of what could be a similarly hard-fought contest against Liverpool on Monday.