Gueye off the mark as Everton prove too strong for Sunderland 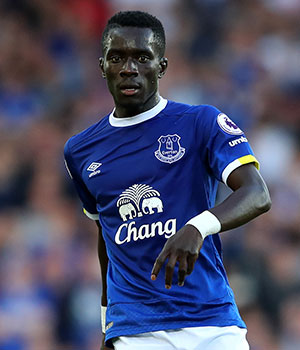 Everton extended their unbeaten run in the Premier League to nine matches with a goal in each half and victory over bottom club Sunderland.

Idrissa Gueye scored his first goal for the Blues with a lovely finish five minutes before the break, pressing home their first-half dominance and Romelu Lukaku notched his 17th of the season to kill the game 10 minutes from the end.

The Belgian's goal came at a significant inflection point in the contest — just moments before, the Black Cats' key danger man, Jermaine Defoe, had cracked a deflected shot off the crossbar which, had it dropped the wrong side of the line, would have levelled matters at 1-1. Instead, Lukaku romped away on the counter from the resulting corner and sealed the points.

Ronald Koeman had named an unchanged line-up from the team that started against Middlesbrough a fortnight ago and his charges quickly settled into a rhythm whereby they controlled the game for the opening half hour.

And Everton came close to going ahead after just five minutes when Leighton Baines slid a cross to Ademola Lookman and Jordan Pickford spilled the youngster's shot but the ‘keeper was able to smother the ball as it was about to spin over the goal line.

With 19 minutes gone, Gueye muscled his way near the byline and tried to stab a shot between Pickford's legs but the Sunderland man did well to block his effort behind for a corner.

The Blues' pressure finally told five minutes before half time when Tom Davies' long pass into space found Seamus Coleman and his cut-back met the run of Gueye who swept the ball high into the net from a central position.

Davies came within inches of sending Koeman's side into the interval two goals to the good but his shot arced onto the post and bounced away to safety from the Black Cats' perspective.

Everton began the second period in sluggish fashion and Sunderland had an early shout for a penalty when Ashley Williams appeared to block Lamine Kone's header with a raised arm and Defoe had a shot blocked.

Kevin Mirallas came off the bench to replace Lookman with 20 minutes left and he dragged a shot wide before Ross Barkley sliced Coleman's low cross over the bar from close range and Pickford parried away a strong effort by Lukaku.

The home crowd were growing restless at their team's slender 1-0 margin but they were incensed when referee Stuart Atwell allowed play to go on despite what looked to be a clear foul on Morgan Schneiderlin and Sunderland almost scored.

The ball was worked to Defoe who wrong-footed his marker and fired goalwards, the ball taking a crucial deflection into the bar and bouncing an inch or so in front of the line. Coleman headed the resulting cross behind and from that corner, Mirallas sent Lukaku away with Bryan Oviedo in desperate pursuit. The Costa Rican slid in to try and stop the striker's shot but he could only help the ball past his goalkeeper.

Lukaku turned provider seven minutes later when he put substitute Enner Valencia into the clear in a one-on-one with Pickford but the goalkeeper stayed big and blocked his shot to ensure that it would finish 2-0.

The win, Everton's fourth in succession at home in the League, closes the gap to Manchester United to four points again but the Red Devils have a game in hand due to their participation in the League Cup Final this weekend.