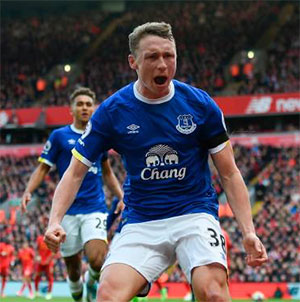 Everton's long wait for a victory at Anfield goes on as Liverpool underscored their superiority on paper with a comfortable 3-1 win in the Merseyside derby.

The Blues fell behind to Sadio Mané's eighth minute goal but hit back through Matthew Pennington shortly before the half hour mark, only to cede the impetus back to the reds when Philippe Coutinho was allowed to cut through and fire past Joel Robles.

Everton were better as an attacking force in the second half but generally lacked penetration and the game was put to bed by substitute Divock Origi who hammered home Liverpool's third after coming on for the injured Mané.

Shorn of injured duo Seamus Coleman and Ramiro Funes Mori in defence, Ronald Koeman deployed a five-man defence that included Pennington who made his first start of the season. Dominic Calvert-Lewin kept his place up front alongside Romelu Lukaku and Tom Davies partnered Idrissa Gueye in central midfield.

In the midst of a typically frenetic start in which Ross Barkley escaped a yellow card for a late challenge on Emre Can, it was the home side who settled first and Mané's burst through the Blues' defence ended with him firing across Robles and into the far corner to give Liverpool the lead.

In a foreshadowing of the second goal, Coutinho went on surging run of his own in which he wrong-footed Pennington but Robles got a strong palm to the Brazilian's shot and Phil Jagielka headed off the goal line.

Everton found a way back into the game via a set-piece, however. Jagielka flicked the ball on at the near post and when the ball came off Dejan Lovren in front of goal, Pennington was on hand to slot home in front of goal.

The restoration of parity was short-lived, however, because just three minutes later, Coutinho took advantage of space in midfield to drive through the heart of the visitors' rearguard, evade Pennington and curl into the far side of the goal to make it 2-1.

With no changes to the personnel or shape until mid-way through the second half, Everton tried to work their way back into the contest after half time and Barkley forced the first real save from Simon Mignolet with a deflected shot 10 minutes after the interval.

But the match was put beyond Koeman's side when Coutinho eased past Idrissa Gueye and fed Origi who gathered the pass and lashed a 20-yard shot down the middle of the goal to extend Liverpool's lead.

Mason Holgate prompted another one-handed save from Mignolet with a deflected shot and then miscued a free header that flew over before substitute Kevin Mirallas's jinking run ended with him firing high into the stand but it was not to be Everton's day.