Spaniards give Blues a stern test after Sandro strike 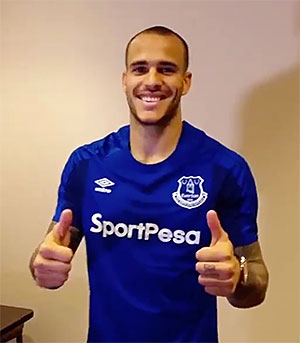 Excellent predatory goal inside 30 seconds from the young striker
Everton take on Sevilla in the last pre-season friendly at Goodison Park.

Dominic Calvert-Lewin returns to Everton's starting line-up for today's friendly clash with Sevilla following his match-winning impact from the bench against Ruzomberok.

There are just two changes to the side that lined-up in Thursday's Europa League victory in Slovakia — with Mason Holgate selected at right-back.

Idrissa Gana Gueye and Ashley Williams are the men to drop out, with Tom Davies — who starred at wing-back during the week — restored to his more familiar midfield role for the Spaniards' visit to Goodison Park.

Jordan Pickford retains his place in the Blues' goal and will play behind a back four consisting of Holgate, captain Phil Jagielka, Michael Keane and Leighton Baines.

Davies is partnered by Morgan Schneiderlin in midfield. Manager Ronald Koeman looks poised to deploy Calvert-Lewin and Wayne Rooney on the flanks — with Davy Klaassen assuming his customary role in behind the team's lone striker, on this occasion, Sandro Ramirez, seeking to continue his impressive scoring record against the Andalusians.


From the kick-off, route one from Jordan Pickford picked out Calvert-Lewin who played in Sandro, brilliantly around the keeper and slotting home inside 30 seconds!

Sandro won a corner, which he took poorly and Sevilla continued to dominate possession since the early goal. A clumsy trip by Klaassen saw tempers rise and two players saw yellow early on, with Pickford sharp to punch, catch and parry as the pressure built on the Blues.

Davies got free and looked as if he was clipped for a certain penalty but he threw his arms up as he crashed to the ground and was shockingly booked for diving!

Another slick move saw Sevilla finally get past Pickford but Baines was there to clear off the line. Ben Yedder then got past the Everton backline and looked certain to equalize but Pickford was out superbly to block the shot away.

It was scrappy stop-start stuff at times. Some better interplay got the ball to Klaassen in space but with perhaps too many options in front of him, he played the ball straight to a defender. Another better move but this time it was Rooney who overhit his pass.

Ronald Koeman rang the changes at half-time. Sevilla proceeded to run rings around the replacement Blues, giving them a stern defensive test. And the resistance in the end was futile as Ever Banega slotted one wide of Pickford to level the score.

Referee Mike Jones, who was having a much harder game than he must have expected, then gave Sevilla a penalty for a foul on Nolito that looked to be outside the box but Benega sent Pickford the wrong way from the spot.

Everton were a lot brighter after three more changes, with Kenny, Besic and Lookman coming on. Lookman's energy led to a penalty for Mirallas that he took himself and forced rather fortunately through the keeper's body.

Lookman produced a superb attempt out of nothing that forced a fine save from Soria, Williams almost scoring with a header from the ensuing corner. It ended 2-2 which was a good result considering how much Sevilla had dominated the play.