McCarthy to be called up by Ireland 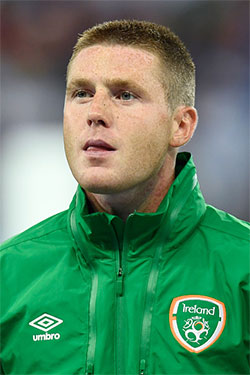 The midfielder has missed part of pre-season and all three of the Blues competitive games so far with a knee injury but had returned to training last week.

O'Neill's decision to include McCarthy in his squad despite him not being match fit is similar to a number of previous occasions on which the player has broken down again in training or on the pitch for his country and has been the cause of severe friction between the Irish manager and Ronald Koeman.

With the first World Cup qualifier not until the start of next month, on this occasion O'Neill might be banking on McCarthy, who has battled to remain consistently fit in recent seasons, being fit in time to play.

Can't think of anyone more annoying than these 2.

The Irish FA &,O'Neill are taking the proverbial. If it wasn't that bad that everytime McCarthy played for Ireland last season he wasn't fit & came back physically worse. We lost Coleman for pretty much a season whilst playing for Ireland!

I guess that explains your role in the ToffeeWeb "family"!

Terribly boring at this stage but I always have a peep at the threads for the laughs.

"I guess every family needs a deadbeat."

What do you call someone who continues to not produce, causing everyone else to pick up the slack, while continuing to do other things they want to do before taking care of their responsibilities back home?

McCarthy has been injured for years now, unable to contribute for Everton. Yet every time Ireland comes calling does he say to them "no, I need to take care of business at home first"? No he doesn't. He joins them instead of continuing to work on his fitness with Everton. It's like a child, you can't go play at your friends house if you haven't done your chores at home. But McCarthy goes off and stays injured, while Everton pays his wages.

Poor analogy which doesn't work on any level. Let me ask what do you call someone whose hamstrings are shot from being asked by his club / former manager to play while injured. Next time you wonder why he's injured so often, ask yourself why that is.

Missing Hibbo and Ossie, are we?

1. He is only called up not playing when declared unfit. No statement yet by Everton about him being not fit enough to play in four weeks time. So cut out the hysteria.

2. If he is not wanted by the club, what's the hysteria about.

3. On a provocative note, it is clear Koeman is not interested in playing him. In limbo like Niasse and the most of you here don't want him so he has no future at Everton. Why would he not put himself in the shop window if he got the opportunity?

Michael Burke
31 Posted 14/08/2017 at 21:51:21
Has he done this out of spite for Koeman calling him out last year over injured players on international duty?

I'm a big fan of players playing at international level, but surely someone should be intervening given the history here.

Gerry Ring
32 Posted 14/08/2017 at 22:21:13
It's not too long ago that McCarthy was our best player & without him we struggled. Having been at the game on Saturday, I have no doubt that McCarthy is very much needed at Everton.

We could do with less of the hysterics. If he is unfit then he should stay at the club otherwise I believe he is required to travel. Koeman needs to keep a cool head here too!

Ireland need him more than us. In O'Neil's position, I would do the same. As for players playing injured, most of them carry knocks whilst playing – it's the norm for professional footballers.

"Its a shame that his career has been plagued by international duties."

That's the thing Colin – it hasn't. The problems he has all go back to a certain Catalan asking him to play through injury for his club. The Koeman vs O'Neill stuff is a ridiculous sideshow that has detracted from this uncomfortable truth.

Mccarthy is valued at around £20-25m, I like jimmy Mc but now is probably a good time to cash in and look for a player with more going forward.

Mccarthy out along with Niasse and Robles would pretty much cover cost of transfer fee and wages for Mahrez.

Sometimes it's better to cut your losses.

He's got O'Neill and Keane bending his ear to play for his country (waiting for the snide remarks that he was born in Scotland), but anyone who has watched the first few games do this season and who saw a fit James McCarty in his first season at Goodison can see that we need this boy fit for the season.

Dan Parker
38 Posted 15/08/2017 at 02:30:51
What a joke, we should sell him to Ireland so they can have him permanently available. The lad's got his priorities and it's not us; time to go to the Championship.
Alan J Thompson
39 Posted 15/08/2017 at 06:15:59
I don't know what the rules are in these matters but if he has an injury then Everton should advise the Irish FA of the fact, provide a medical certificate and invite them to send their own medical people to Finch Farm to verify it for themselves.

If he then returns with an injury, would Everton be in line for compensation? Not an entirely satisfactory situation but it might open up discussion in the matter.

As a few others have said, HE'S BEEN NAMED IN THE SQUAD, he hasn't joined the squad, O'Neill hasn't said he's fit and he certainly hasn't played. And it's two and a half weeks til the game.

All inconvenient truths to the ToffeeWeb hysteria. What a fortnight we have ahead.

Another point that's being missed, probably intentionally, is that McCarthy didn't join the squad for the last set of games so I guess maybe you might have his priorities wrong.

Give me McCarthy over Stephen Ireland any day. Although if he could pass the ball forward, or even just look for the ball, in green or blue, it'd be a help.

For both player and club the best solution would be to sell. Should really have sold last summer.

A club like WBA or the barcodes would probably take him for 15m.

Breaking transfer Everton have agreed a deal to sign Swansea's Gylfi Sigurdsson for a fee believed to be around £45m.
Anto Byrne
53 Posted 15/08/2017 at 22:51:00
If he is fit then he plays, ffs. It's a win win for all concerned. Gets valuable play time. He gets injured Ireland pay his wages etc same as Coleman.

Players don't go to international games for free especially when they cost millions of pounds. Anyone who thinks otherwise is really naive.
Frank Wade
54 Posted 16/08/2017 at 17:32:07
Apparently he is injured yet again. Seems to me, his body just can't take the hardship anymore.
Oliver Molloy
56 Posted 18/08/2017 at 11:04:49
I heard that West Brom have enquiried about a loan for McCarthy.
Everton would rather sell but will work with clubs.
Shane Corcoran
58 Posted 28/08/2017 at 16:14:34
McCarthy left out of the squad. That's twice in a row now. A boring week ahead for us all.