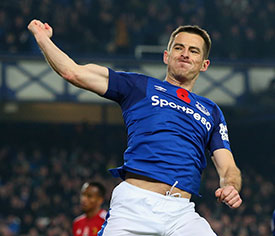 Everton came back from 2-0 down to execute a stunning recovery and lead Watford deep into injury time where Tom Cleverley missed a crucial penalty to ensure David Unsworth oversaw his first win since taking over from Ronald Koeman.

The Blues were heading to a disastrous sixth successive defeat when they started the second half in calamitous fashion, falling behind to goals by Richarlison and Christian Kabasele.

They halved their deficit shortly afterwards thanks to the alertness and determination of Oumar Niasse which sparked a brilliant fightback that yielded an equaliser from Dominic Calvert-Lewin and a penalty in front of the Gwladys Street that was converted with aplomb by Leighton Baines.

Three precious points were almost spurned 10 minutes into time added on for lengthy stoppages for treatment to Huerelho Gomes and Kabasele when Pickford tripped Richarlison in the six-yard box and the visitors were awarded a penalty of their own.

Cleverley missed the spot-kick, however, allowing Everton to close out the final two minutes and secure a priceless win.

David Unsworth named another changed line-up, with Phil Jagielka, Baines and Wayne Rooney all returning to the starting XI and Michael Keane available again following his recovery from an infection in his leg.

Tom Davies was also back in midfield, Niasse started up front with Gylfi Sigurdsson also in the lineup but there was no place in the squad at all for Nikola Vlasic, Kevin Mirallas or Morgan Schneiderlin, the latter two having been dropped, apparently for" "lack of effort" in training.

A cagey first 20 minutes eventually yielded the first real chance, when Niasse linked with Davies, Rooney fed the ball on to Baines in oceans of space but his attempted placed effort was fired too close to Gomes who parried it away.

A Sigurdsson free kick almost broke to the feet of a Blue jersey 10 minutes before the break but genuine chances remained at a high premium.

The best chance of half fell the visitors' way, though, when Richarlison drove forward, Pickford was caught in no-man's land but the Watford man could only find the side-netting from the angle with the open goal gaping.

Richarlison made amends just 30 seconds into the second half, however. Everton were carved wide open again and the forward was able to take it wide to the left around Pickford once more and slam it past Kenny on the line to make it 1-0.

The Blues had a great chance to level things up seven minutes later when Niasse rolled the fullback and squared it for the advancing Sigurdsson but once again Gomes came to the Hornets' rescue, diving across his goal to block the shot.

The Brazilian was injured in the aftermath of the chance, however, as Niasse caught him in the head with a knee which eventually necessitated his substitution with Karnezis coming on in his place.

Unsworth withdrew Baningime in favour of Lookman while Gomes was down getting treatment but he found his side 2-0 down shortly afterwards. Kabasele rose highest from a corner having lost his marker and powered a header home.

Everton grabbed a lifeline three minutes after that, though, when Niasse toed the ball past the keeper who had come flying out of the his area and despite being tripped as he charged through to put it into the empty net, he scored.

Rooney was replaced by Calvert-Lewin and the striker was involved in a good move that ended with Kenny's drive being deflected behind for a corner. Baines swung in the corner and Calvert-Lewin was there at the back post to head home and send Goodison into bedlam.

Unsworth's final change as the clock moved into the last five minutes saw Sigurdsson replaced by Lennon but Everton remained vulnerable from set-pieces and Mariappa came within inches of restoring Watford's lead, his header dropping wide.

But when Lennon was felled by Holebas in the final minute of the regulation 90, the Blues were handed a great chance to take the lead. Baines stepped up to take the spot kick and, despite a short run-up, he placed it perfectly past the keeper to complete a stirring comeback.

Watford piled on increasing pressure and sunk Evertonian hearts when they earned a penalty 10 minutes into stoppage time. Richarlison looked odds-on to score his second as he neatly side-stepped Pickford in front of goal but the 'keeper tripped him trying to make a last-ditch tackle.

Cleverley stepped up with the chance to drive a stake into his former team's heart but screwed his kick wide to spark more wide celebrations around the Old Lady and the Blues held out the final couple of minutes to claim a crucial victory.

This was only the second time since the relegation-defying win over Wimbledon that Everton had come back from 2-0 down and it could not have come at a better time. 10 minutes into the second half, the club was staring a long battle against relegation firmly in the face but a brilliant fightback not only lifts Everton out of the relegation zone, it offers hope that this collection of players has the stomach for any fight to survive in the top flight.