Onyekuru back at Anderlecht following injury 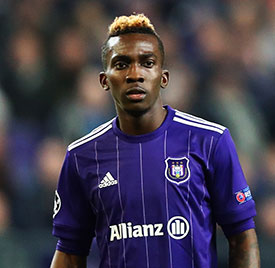 Everton striker Henry Onyekuru has returned to Belgium to resume his loan spell with Anderlecht as he bids to finish the season on a high.

The 20-year-old, an £8m capture last summer from Jupiler League side KAS Eupen, suffered a knee injury last December that looked at one stage as though it could end his season.

Having avoided the need for surgery, Onyekuru has endured weeks of patient rehabilitation and was deemed fit enough to rejoin Anderlecht's squad this week.

"I want to say thank you to everyone that made my recovery possible," the striker said on Instagram. "The medical team, staff and doctors at Everton for their rehab and facilities.

"I also want to thank RSC Anderlecht and the amazing supporters for their support and their faith in me during this journey."

The intent behind the decision to loan Onyekuru straight out to Belgium was to allow him to continue progressing in a familiar league and gain enough notice to be selected routinely by Nigeria so as to earn enough international caps to qualify for a work permit in England.

"I have to prove that I'm able and worthy to go and play," he told BBC Sport. Once I do that, it's up to the manager to select the team.

"There is a lot of competition which is good. We have a strong team good enough to represent the country very well."

Onyekuru scored 10 times in 28 appearances for Anderlecht before his injury and he will be hoping the pick back up where he left off and be chosen by his country for this summer's World Cup.

Lyndon, sorry but this is wrong. The intent is that he clocks up two years in Belgium and qualifies for a Belgian passport and under (the soon to be lost) freedom of movement of workers, he can come and play for us without a work permit as an EU citizen. Clubs in England use Belgium for their laws on citizenship which sees only 2 years living there to be enough to qualify, whereas most other European countries is 3, and UK is 5 years.

The question is, has his long period in England for rehab scuppered this, or will it delay his transfer as he waits in Belgium to clock up the required number of days?

Steve Ferns
5 Posted 17/04/2018 at 21:21:42
Some quick research shows that Onyekuru joined the Belgian League in the Summer of 2015, therefore, he's already done his two years, and maybe the passport is already secure?

If I'm wrong on this and Belgium have upped their two years to three years, then letting him go back to Belgium with a view to making the Nigeria World Cup Squad, which would strengthen any work permit argument.

Can't wait to see this kid in Royal Blue. Talk about adding pace to the side. And remembering that YouTube video that was here when he was signed, he's borderline reckless in the attack. We can use some of that, too.

Can't wait to see him.

Mike Gaynes
7 Posted 18/04/2018 at 00:24:07
Sean and James, control your excitement. I've seen him play a couple of times, and yes, he has blistering pace and complete confidence to beat defenders off the dribble. But he's also lazy and undeveloped. Henry's manager at Anderlecht criticized him several times this season, and right before he was injured said publicly that "he always lets himself down."

It appears he has a great deal of maturing to do before he becomes anybody's hero. Let's hope his grueling rehab gets him back on the pitch for Anderlecht and/or Nigeria and gives him a chance to grow up a little.