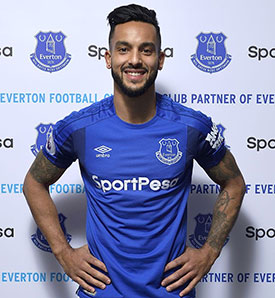 Theo Walcott scored the game's only goal, hammering home a few minutes into the second half

Everton beat Newcastle by a solitary goal for the second time this season as Theo Walcott converted his side's only shot on target with an emphatic finish.

The Blues were unchanged from the team that started against Swansea last weekend for the visit of the Magpies this evening, with Schneiderlin and Gueye in midfield alongside Rooney.

Leighton Baines made his 400th appearance for Everton when he started in his customary left-back role.

Everton started on the front foot and had an early claim for a penalty waved away by referee Robert Madley when Theo Walcott went down in the box after busting through and Cenk Tosun bobbled a shot wide.

Yannick Bolasie then had a side-foot shot from Baines's pass blocked in routine fashion in the 16th minute.

While the visitors were content to drop back, invite their hosts on and try and hit them on the break, the onus was on Everton to take the game forward and they won back-to-back corners from which the best chance of the game thus far eas created.

Rooney swung the ball back into the box after the second set-piece had been cleared, Keane's header dropped across the six-yard box and Jagielka arrived at the back post but couldn't help but sky a first-time shot over.

What should have been Newcastle's best chance arrived three minutes later when Jordan Pickford's clearance caught Kenedy and fell invitingly to Islam Slimani who just had to slide in Ayoze Perez for a clear opportunity but he over-cooked the pass and the 'keeper slid in to claim it.

Back at the Park End, Baines's teasing square pass was begging to find a Blue jersey but skidded behind Tosun and too far ahead of Gueye as Everton continued to try and find a way through.

The second half began in the same pattern of Everton dominating the ball without doing much of note with it and a mix-up at the back presented Perez with a good opening off Kenedy's touch but he delayed the shot and ended up slicing wide under pressure from Keane.

Moments later, however, it was 1-0. A deep Bolasie cross fell to Walcott via a somewhat fortunate rebound and he took a touch to make space for a shot that he despatched high into the Newcastle goal.

Morgan Schneiderlin, whose recent revival of form had continued in the first period, had to be removed immediately after the goal with an apparent injury and was replaced by Tom Davies.

Newcastle came close to equalising 10 minutes later when Lascelles rose highest to meet a corner that dropped to Dwight Gayle who had just come on but he swept the ball narrowly over from close range.

Gayle was brought down by Keane as he touched the ball past him in full flight with a quarter of an hour to go but Matt Ritchie's curled free kick cleared Pickford's bar by a foot.

Everton struggled to keep control of the game in the final 10 minutes but were let off the hook by ineffective attacking by Newcastle. Seamus Coleman did have to make a last-ditch intervention in stoppage time but the Blues saw out a narrow win to remain in ninth place.