Williams looking to put frustrating season behind him 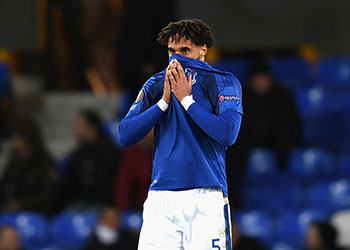 Ashley Williams has spoken of his predictable frustration at having had to sit out the last couple of months of the season without playing.

The Welsh international was a regular starter for much of the campaign, one which had been expected to be one in which Everton pushed for a place in the top four, but he didn't feature after betting sent off against Burnley in early March.

The 33-year-old served his suspension but was not recalled by then manager Sam Allardyce and he is now looking ahead to next season when he will be working to impress a new head coach.

Williams was speaking to the media ahead of Wales's friendly against Mexico in Pasadena.

"Yes, definitely," he said when he was asked if 2017-18 had been frustrating for him personally.

Williams added: "But that season is done now and I'm just looking forward to this game and into pre-season for the next campaign.

"It's always difficult not being involved and you want to play because playing a game is that bit harder.


"But what can you do? I've just tried to stay in shape and on Monday I'll just try and use my experience as best I can and play as well as I can."

Suggestion: Don't unpack your suitcase when you get home from Pasadena. You'll be needing it again shortly.

Best of luck to ya.

Amit Vithlani
3 Posted 27/05/2018 at 15:53:39
Why is this even a story? The bloke had the armband and got stupidly sent off against Burnley. It might have merited airtime had he come out and held his hands up for being a total amateur. His behaviour encapsulated what this squad were about last season – slapdash, unprofessional and uncaring.
Jim Bennings
4 Posted 27/05/2018 at 16:05:01
Not turned out to be the player I thought we were getting from Swansea in 2016.

I thought we were getting a vocal leader, a no frills, no shit defender who wore his heart on his sleeve and much like when we signed a 31-year-old Sylvian Distin in 2009, I was convinced at 31 we would see the best years of Williams career.

That's sadly where the comparison with Distin comes to an end.

What we got with Williams was a sluggish, very leaden-footed slow defender with woefully poor position sense and where the vocal leadership qualities went I'll never know because my abiding memory will be seeing him always going hiding under his shirt when going got tough and throwing immature tantrums.

I'd like to thank him for that winner against Arsenal just before Christmas in 2016, it was a goal that took the roof off the Old Lady under the floodlights, but that's as good as it ever got for the Ashley Williams - Everton partnership.

Joe Foster
5 Posted 27/05/2018 at 16:18:27
He's not good enough. Nowhere near Premier League standard.
Ray Said
6 Posted 27/05/2018 at 16:33:34
It's great to hear you say "I've just tried to stay in shape" – it's just a pity that your usual shape is one of sitting in a squat with your head in your hands after letting yet another striker free in our box.
Jack Convery
7 Posted 27/05/2018 at 16:37:38
His quote that I read – "It's good to be back with the Welsh guys as we have a laugh and we all get along with eachother" – speaks volumes about the turgid atmosphere amongst the squad. A disunited squad will never win anything. Ask Joe Root – he's got the same problem with the English cricket team.

I thought we had bought a leader with a "none shall pass" attitude – instead, we got a "can't pass, can't defend" player, who has consistently looked out of his depth and let his anger get the better of him on too many occasions.

He will go in the summer, along with quite a few others. i Cannot wait for the books from these players when they eventually come out. Season 2017-18 The Season From Hell.

Brian Cleveland
8 Posted 27/05/2018 at 16:40:46
Is he still here? Transfer window has been open for a few days now... there must be someone in League Two or a local pub who thinks he might be good enough for them? No transfer fee required, we'll even pay his bus fare.
Ian Bennett
9 Posted 27/05/2018 at 16:42:53
Hope Swansea re-sign him. Liability.
Jack Convery
10 Posted 27/05/2018 at 16:53:20
His quote that I read; "It's good to be back with the Welsh guys as we have a laugh and we all get along with eachother" – speaks volumes about the turgid atmosphere amongst the squad. A disunited squad will never win anything. Ask Joe Root: he's got the same problem with the English cricket team.

I thought we had bought a leader with a "none shall pass" attitude – instead, we got a "can't pass, can't defend" player, who has consistently looked out of his depth and let his anger get the better of him on too many occasions.

He will go in the summer along with quite a few others. I cannot wait for the books from these players when they eventually come out. Season 2017-18 — The Season From Hell.

He could do a job for Tranmere. Bye bye.
Richard Lyons
12 Posted 27/05/2018 at 17:18:35
He might have been a Paul Power, but it didn't happen...
Kunal Desai
13 Posted 27/05/2018 at 17:27:37
Sadly not the footballer who showed great leadership in his Swansea days. No doubt he saw the opportunity like one or two others to join the club and pick up a few quid in his last years as a Premier League footballer without breaking any kind of sweat.

One player that desperately needs to be shown the exit door. Hopefully, some mug from the Championship will take you.

Jagielka and Baines can't sustain a full campaign, yet they were pivotal to our recovery last season; hopefully Brands can identify the players we desperately need in all positions.

Gavin Johnson
16 Posted 27/05/2018 at 17:37:16
My hope is that we bin him off to Swansea or Newcastle in a deal involving Mawson or Lascelles.
Geoffrey Williams
17 Posted 27/05/2018 at 17:45:05
I said from the outset that he'd be no good for Everton. We needed someone good in the air, quick and able to play the ball out from the back. His best days had long gone.
Keith Monaghan
18 Posted 27/05/2018 at 17:59:08
He was a panic signing after we cashed in on Stones... Boys Pen Bill or Walsh guilty? He was way over-rated based upon a couple of half-decent games for Wales in the Euros, where his lack of pace and mobility never got exposed.

We'll get little for him – just get him off the payroll; he was a liability all along.

Bill Gienapp
19 Posted 27/05/2018 at 18:43:51
Unfortunately for him, I doubt there's a single Evertonian who wants to see him stay. In fact, he probably has less currency amongst the fanbase than even Schneiderlin, who at least *could* be salvaged, in theory. Williams has nothing to offer at this point.
Peter Fearon
20 Posted 27/05/2018 at 19:08:59
Ashley Williams should call West Brom or Swansea to see if they need a defensive sub with anger management issues. Nice guy, but not up to Premier League football anymore.
Dave Evans
21 Posted 27/05/2018 at 19:24:35
I understand what people are saying but a little unfair. Williams is great at cutting out crosses and getting a foot in when a team is under intense pressure. But he gets turned too often and is easily bypassed outside the box.

He may still have something to offer as a squad member in a new setup.

He might do a job for someone, but not for a team looking to finish in the top 8...

He was actually a lot slower than he looked!!!.

A big disappointment and there isn’t an Everton fan I’ve spoke to who wants him to be here next season. He’ll be back at Swansea, sold for buttons.

Eddie Dunn
28 Posted 27/05/2018 at 22:30:54
A shame. The lad turned-up for pre-season way out of shape with a load of games waiting for him. He has gone from a titan at Swansea and Wales, to a frustrated, slow player with anger problems.

That said, however, some short memories here, folks: he actually played 'well' if I recall for the first few months of his time at Goodison.

I think his loss of form was down to attitude myself as he didn't keep himself in good shape.

John Roberts
30 Posted 27/05/2018 at 22:41:39
Just what happened to him? I agree with most of the comments; he's nothing like the player he looked at Swansea. Surely it was only due to injuries he played so much. He was just awful, probably the worst performing player to keep his place for so long in history.
Jerome Shields
31 Posted 27/05/2018 at 22:59:05
How long of a contract did Everton give him?

Obviously too long. He should be gone.

His sending off for basically losing his head killed any chance of getting back in the game. He let the team down when he was supposed to be the leader.

Wayne appears on his way to DC. I'd put Williams in with Mirallas, Besic, Garbutt, Browning, Galloway and some others. The Club needs to cut the roster down from the 30+ it is now. Moshiri might have to eat part of these contracts trying to find other clubs who will take them off our books.

Unpalatable it might be, but we could have an expensive sub at centre-back in WIlliams for his last contracted season.

Rob Dolby
39 Posted 28/05/2018 at 09:07:12
What hasn't helped any of our defenders is a midfield that contains one player who can tackle. Morgan was like the invisible man and don't get me started on formations or the Number 10.

Regardless Williams isn't a patch on Jagielka and shouldn't be considered over Jagielka, Funes Mori, Holgate or Keane.

One of the promoted teams will hopefully take a chance on him.

He should never wear an Everton shirt again. If he wants to return to playing then NOT for our club!!!

Are you Welsh by any chance?

Yes Ashley, there's a reason for that, you were a liability and eventually someone actually noticed and did something about it!

Good luck with what remains of your career, but please don't let it be at Goodison Park or the new stadium.

He's conned a lot of people, myself included I have to say, playing for Wales. Sat in the safety of the middle of a three, deep, and employing the basics of positional play. What a defender, what a warrior! Ask him to play any higher up the pitch and he absolutely bricks it.

I'm still traumatised by the "performance" from Williams and Keane at Burnley.

Everton seem to always sign players of this nature at the back end of their careers for about one season only.

Remember the likes of Mark Hughes, Gazza, Richard Gough and now Rooney to name but a few but will take Messi and Ronaldo for a year. LoL.