Cenk Tosun double too much for Iran 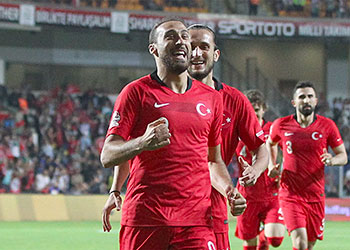 Cenk Tosun scored both goals as Turkey beat Iran 2-1 in a pre-World Cup friendly this evening.

The Everton striker showed the predatory instincts that made him one of the bright spots in an otherwise dreadful season as he got the Turks off to a great start with a goal after just six minutes.

Tosun, who is among the nominees for Champions League goal of the season, was played in by Mehmet Topal who capitalised on slack defending and buried the chance to make it 1-0.

Tosun struck again five minutes after half-time when collected Yusuf Yazici's pass and buried his shot past Alireza Beiranvand at the near post.

Ashkan Dejagah scored a consolation at the end from the spot after Omer Bayram had been sent off.

Tosun actually makes the same run twice in the early minutes. He misses the first chance due to a heavy touch but coverts the second with a sweet cutback onto his left. And the second goal is just a calm, professional finish off the inside of the post.

I know there's still some skepticism about Tosun amongst us, and a lot of "get rid" lists include his name, but I've liked him from Day 1, and I think he's the real deal.

I wasn't aware his allegiances were with the USA, or that he was already in their thinking, but it's a promising sign that he might be ready to contribute something to our first team next year.

* He has a thumping shot with either foot

* Depending on the circumstances, he can hit a powerful rising shot, or a cleanly struck ground shot, both of which gives keepers minimal reaction time to defend

* He is very quick to assess the angles and technically efficient to place the ball precisely to give himself good odds of scoring. His goal against Huddersfield and his second tonight demonstrate this

With better players, better coaching and a full pre-season with us, I anticipate he will be a big player for us next season.

He has looked good tonight at left-back, albeit with not much to do because Bolivia hasn't attacked him often. Excellent pace.

Both Tosun strikes were good too. He would lap up that ball Robinson put in all day long.

Based on tonight's highlights, I can only conclude that we're going to win the league.

Rom had the same issue for much of his time with us. We could have Aguero or Kane upfront for us and they would still be feeding off scraps!

Derek Knox
19 Posted 29/05/2018 at 10:14:04
It shows how unorganised we were last season, at times Tosun looked stranded, having few chances in a game, and the few that came, were either off target or came to nothing.

He then plays for his National side, and looked the real deal.

My question marks against him is he lacks physicality, in most games he is easily out muscled by defenders. How any coaching changes that, I don't see you either have it or you don't. Same with pace, he is very pedestrian and again no coaching in the World will make him quicker.

I would imagine that if its Silva who gets the job he will look for a more mobile striker. That's not to say Tosun can't play a part from the bench, but for me, he's not a player who would start a game. I think that the overriding theme of the successful teams in the Premier League is pace and power. So I would imagine Lookman and Walcott on the flanks and a pacy striker would be the way to go next season.

We also lack strength in midfield, I would love us to sign Loftus-Cheek, he would give us some power and height in midfield, as well as being very good on the ball.

Dave Pritchard
25 Posted 29/05/2018 at 11:52:46
Lookman is an interesting one. I wonder if he'll be in our squad next season? What is the current state of play with him? Was he just loaned out until the end of the season or was it more long-term?

On a similar theme, how much longer has Mirallas got on his contract? Please let his contract be expiring this summer.

Tom Bowers
26 Posted 29/05/2018 at 12:10:21
After most of the team played very inconsistently last season, it's only natural most of us fans will be pessimistic about the same squad making a big improvement.

Obviously a lot depends on what a new manager brings to the table and if he can instill a confidence in some players who haven't yet made a big impression.

Cenk Tosun is one of those players who, playing as the main ''goalscorer'' will need to step up to the plate.

Walcott can score as can Niasse but only one will be a starter alongside Tosun and I somehow doubt Bolasie can be the effective player he was.

The new manager, however, may make wholesale changes that will negate some of these thoughts and we may see very little of these names.

I have, like many, always thought that without a strong midfield the strikers will struggle just as they did last season, and so I expect a new man to really improve that area.

I am saying 'stay', as the loan to Leipzig expired when their season finished, and he still has, another 3/4 years with us, so hopefully, the new regime will convince him his future is with us, and that he will be involved more.

As for Mirallas, Koeman got him a 3-year contract, whether it was a straight 3 or an extension I am not sure.

It still makes my blood boil, the damage and expense that Koeman has caused to the Club, and he got rewarded for it.

If Calvert-Lewin could finish like that he'd be top class. Someone to copy and practice, practice and keep practicing with (both feet)!

Maybe they could play together. The mature seasoned striker with good movement and finishing and a young, fast, decent-in-the-air partner who looks to link-up play. Shearer and Sutton... only better and in blue!

Joe O'Brien
29 Posted 29/05/2018 at 14:59:01
Two well-taken goals from Tosun... I'm not sure can we give credit to Sam for getting him in. I read somewhere that the groundwork was already done on him before Sam arrived... I think he'll do very well for us also next season with some attacking tactics actually being worked on.
James Stewart
30 Posted 29/05/2018 at 17:46:59
His miss against the Red Shite still lingers in the memory and I'm unsure whether he is anything more than another Jelavic but happy to be proved wrong.
Darren Murphy
31 Posted 29/05/2018 at 19:57:32
Man they didn't post my comment on when there was none when this piece came out, so I'll say it again: Tosun is a great player, skilled and a top striker who knows where the goal is at, hopefully the new manager buys us a new pacy strike partner and he'll be banging them in.
Liam Reilly
32 Posted 29/05/2018 at 19:59:38
He did enough last season to be worthy of a shot, did 'Son of Toe', but he wouldn't be a starter in any of the top 6 sides. Though, there's not many of our squad who would, to be fair.

I can't see a 20+ striker coming to Goodison Park this year with no European football, so he'll likely start as the main striker, I'd be betting.

Good to see my namesake is back. Couldn't agree more mate, by the way.