Silva announcement expected before the weekend 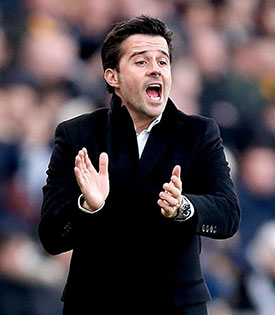 Marco Silva's confirmation as Everton manager could arrive in the next two or three days, possibly coinciding with Marcel Brands's first day on the job.

Brands officially begins his role as the club's new Director of Football on Friday having spent the past week or so wrapping things up at PSV Eindhoven where he spent eight successful years.

The Dutchman has also been consulted over the process of hiring the Blues' new manager and is believed to have spoken with Silva while a wrangle with the latter's former club, Watford, over compensation has played out in the background.

According to the latest reports, an agreement between the two clubs has almost been reached, although Everton had been expected to name the Portuguese as the long-term replacement for Ronald Koeman regardless of the outcome.

Watford had lodged an official complaint with the Premier League over what they deemed to be an illegal approach by the Toffees for Silva back in October and November when they were searching for a successor to Koeman whom they had recently sacked.

The Hornets dismissed Silva himself in January, blaming Everton for unsettling him and causing him to lose focus and he has been out of work since.

He looks set to sign a three-year contract with Everton, having reportedly turned down offers from China and on the Continent to stay in the Premier League.