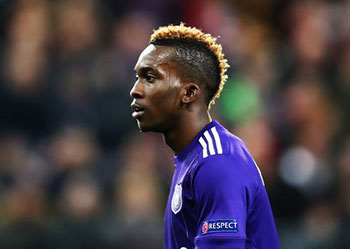 RSC Anderlecht have responded to accusations made by Henry Onyekuru and certain observers in his native Nigeria that they deliberately withheld him from their team in recent weeks.

The 20-year-old was signed by Everton in a £6.8m deal from KAS Eupen last summer and immediately loaned to Anderlecht for the season where it was hoped he could continue his promising career in Belgium and attract the attention of Nigeria when it came to naming their squad for this summer's World Cup.

He scored nine goals in 19 games but was then struck down by a serious knee injury, only returning to fitness in the latter stages of the season. He was not selected by Anderlecht, a decision he believes was taken by head coach Hein Vanhaezebrouck to keep him out of the reckoning for Russia 2018.

Onyekuru hoped that by being selected by his country, he could earn the required number of caps to qualify for a work permit to play in the English Premier League starting in 2018-19.


“Anderlecht knew I needed the World Cup to get a work permit to play in England, ” he said, “and by not making me play, the chances of going to Russia were nil, and so I could not join the Premier League.

“That may be how Anderlecht hopes to keep me for another year — a ridiculous reasoning; I can go anywhere.”

Following suggestions from Anderlecht staff that Onyekuru looked tentative on his knee in training and unready for first-team action, the Belgian giants issued a statement refuting the forward's claims.

“Henry is a great player and his injury in December weakened the squad and reduced the chances to participate to the World Cup with his country,” a club spokesman said.

“RSC Anderlecht, nor the technical staff never made any promise to Henry concerning his selection.

“RSCA is a professional club and it wouldn't be very professional to make promises to players. The coach selects the best and fittest players for the games.”

Despite those assertions and the fact that Everton have an agreement with Anderlecht for him to return there on loan next season, Onyekuru appears to have made up his mind that he will be playing his football elsewhere.

He has already explored a season-long loan opportunity with Borussia Moenchengladbach, although it doesn't appear as though anything has been agreed on that score.

'I was fit, but I did not play,” Onyekuru explained. “So I'm not staying with Anderlecht. He (Vanhaezebrouck) has not spoken to me for weeks. I know what he said about me.

“Thanks to the media, I had to learn that I was not ready, so to speak. I have worked very hard in the last few months to come back. This was not enough for some.”

Then again, so did Mirallas...

What the hell is going on with such merry-go-rounds, with players signing then never playing or us? I have doubts over whether this guy ever will.

Too much money swilling round and too many dodgy deals like this – but heaven forbid anyone should question why, or dare to do something about it.

This game of ours is rotten to the core, and everyone turns a blind eye.

Frank Wade
9 Posted 30/05/2018 at 13:12:28
David & Darren, Henry hadn't played enough International games to get a permit to work in England. Everton did well to sign him against stiff opposition. The plan was to loan him to Anderlecht in the hope of additional Nigerian caps and a work permit.

I assume the situation will be worse after Brexit as Europeans will have the same status as Henry and other non-Europeans, unless a whole new set of rules are drafted. Players like Kante, with no French caps playing in France, would not qualify for a work permit post Brexit under the current work permit rules.

It's a toss-up as to whether there's any truth in this. Were Anderlecht looking out for his health and welfare by not playing him or concerned that he might qualify for a permit and return to Everton next season if played and selected for the World Cup?

Si Cooper
10 Posted 30/05/2018 at 13:16:54
As was pointed out on another thread recently, we are not going to sign any player who is ready to hold their own in a top six side. Therefore we have to gamble on this sort of scenario and hope the player comes good.

I would hope someone from the club was monitoring the lad's situation closely and we are able to make up our own minds as to whether he was deliberately under-used after recovering from his injury.

If he was held back, then his reaction isn't at all prima donna-ish.

Mike Keating
11 Posted 30/05/2018 at 13:23:01
According to the rules for non-EU players, I think he has to play in over 75% of Nigeria's games over a 2-year period. As he has only played twice for them and is out of the World Cup squad, he's not coming to the Premier League anytime soon.

I don't know if serious injury counts as extenuating circumstances but I guess the lawyers have already looked into that one.

Tony Marsh
12 Posted 30/05/2018 at 13:51:30
Another blinder by Steve Walsh. What is the point in a club of our limited status buying players who can't play for us when we are crying out for strikers? We are not exactly Chelsea who do this a lot.

Another cock-up to add to the Sandro, Klaassen list.

Justin Doone
13 Posted 30/05/2018 at 14:39:30
It's all a farce made worse because those lessons were obviously not learnt from 20 years ago. I understand investing in youth but £7m is a gamble on any young player, even one that could play for us.

I wonder if Brands and the new manager will be allowed to stay after Brexit. Hopefully Brands improves the youth team massively in the next 12 months.

If the Everton luck (or lack of) has anything to do with it we'll be begging Sam and or Moyes to come back to sort us out.

I'll put it down to his agent, his frustration, self-confidence and a bit of lost in translation but, until his future is sorted, why disrespect the only opportunity currently available. Get new club, thank new club, then 'compare' clubs.

Mike Dolan
14 Posted 30/05/2018 at 15:01:40
Henry Onyekuru sounds like a real pain in the arse too me. Everything seems to become a drama with him. That doesn't make the rules deciding which players a qualified to play in Britain make any more sense though.

Football is a massive entertainment business surely pressure could be brought on our own government to allow non-European players to automatically be granted a temporary work permit as would be granted to entertainers from Russia like The Bolshoi Ballet. If drama queen Henry doesn't have Euro status, how come he can ply his trade at Anderlecht and whine about it so publicly?

Incidentally Steve Walsh whilst out of his depth as DOF made some good young signings. It's a bit disingenuous to say Klaassen was such a great failure when he was perhaps the least to blame for our painful last season because he was never given a fair shot of actually playing. I think Klaassen and Sandro may yet come good.

Mike Gaynes
15 Posted 30/05/2018 at 15:39:40
Mike (#14), I have the same feeling about Henry. Vanhaezebrouck is a cranky old manager of modest repute, and he may well have it in for Henry, but his criticism of the lad has been too frequent and too sharp to be totally unwarranted.

Last autumn, he defended his decision to move Henry from his preferred striker position to the wing by saying, “He was lost in that top position and did not know how to ask for the ball. That's why I sent him back to the flanks.” Then in December, right before the injury, he told a press conference that Henry "always let himself down."

Last week was the worst, when he insisted it wasn't Anderlecht's fault that Henry will miss the World Cup. "Everyone sees that he is not ready to play – he is afraid of the duels – and then I cannot pick him to please him. By the way, Henry still has a lot to prove with the national team. He was not a fixed value for his injury either, hey?"

Also, HLN reported Henry missed training last week as he was in talks with Borussia Monchengladbach, but Vanhaezebrouck implied Henry had falsely claimed to be sick.

I'd still love to see this kid play for us – he's an exciting talent with lighting pace – but I wouldn't be surprised to see him sold on for profit this summer.

Regarding the new manager, he is a bit of a knob, Anderlecht changed their manager. Everything was going fine for Henry then later he got injured, was looking good for 18 for the season! Doesn't sound he wants to stay and it does sound that Anderlecht had their motives!
Ian Burns
18 Posted 31/05/2018 at 12:22:14
Talking of the Anderlecht manager being a bit of a knob – I am about to make a knob of myself by asking the following question... which will be obvious I presume to any TW poster with half a brain... which leaves me short of a few percentage points!

I presume the UK has different work permit rules/laws to the rest of Europe despite Brexit not yet taking place, hence the issue with Henry joining a Belgian club and not EFC?

I knew I shouldn't have asked that question!

In the UK you need to wait five years before you can apply for UK citizenship, Belgium is 3 years. Henry has done 2. It was hoped he’d get a work permit and if not he’d get a passport next summer.

In terms of Work Permit rules, again member clubs set their own. Some countries make footballers eligible for a work permit automatically but then restrict the number of non-EU players. The UK, as always, has the some of the toughest rules.

The Premier League must be crapping themselves over what happens after Brexit.

You make a good point with regards to the Premier League after Brexit yet it's never a subject under discussion – at least not openly.

Martin Nicholls
21 Posted 01/06/2018 at 16:57:21
Take advice from Watford! Less than a year ago they applied for and were granted a work permit for Richarlison (thus indicating that he does not have dual Brazilian/Portuguese nationality) – what successful arguments did they advance? Surely it could not be as simple as him coming from a more successful footballing nation than Nigeria otherwise the Pemier League would be flooded with young Braziian players.
Michael Kenrick
22 Posted 12/06/2018 at 05:46:39
Latest on this story is an 'exclusive' at the Complete Sports Nigeria website, which claims he told them that he is considering offers from Germany, Spain and England instead of another loan spell with Anderlecht:

“One thing I can tell you for sure is that I won't be playing in Belgium next season,” the 20-year-old forward told CSN exclusively.

“There are offers from top clubs in Germany, Spain and in England but that depends on my work permit, we know how difficult that is.”