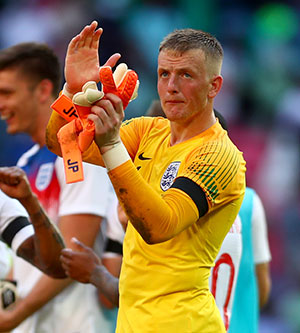 Jordan Pickford was named in England's starting XI as Gareth Southgate's side ground out a narrow victory over Tunisia in their group stage opener.

Everton's No.1 was deployed behind former Blue John Stones in what was only his fourth appearance foe the senior side.

England started on the front foot and almost scored through Jessie Lingard but his shot from in front of goal was diverted wide by Mouez Hassen.

The Lions did get the opening goal shortly afterwards, however, from a corner. Stones powered a header goalwards that Hassen saved well but could only push straight to Harry Kane and he slotted in from close range.

Tunisia were awarded a penalty in the 34th minute, however, when Kyle Walker caught Fakhreddine Ben Youssef around the head in a tussle in the box, handing Pickford the chance to be a hero for his country.

Pickford guessed the right way and got a hand to it but the penalty was well-struck by Ferjani Sassi and he couldn't keep it out.

England had a great chance a couple of minutes later when a downward header from a corner was cleared off the line and fell invitingly for Stones. He flapped at the chance, however, and sliced it wide of goal while a penalty claim on Kane was ignored even after a VAR check.

Lingard then twice went close, first seeing a half-volley deflect over and then clipping the ball over the onrushing 'keeper and onto the outside of the post.

The Tunisians made things very difficult for England in the second half, sitting deep and breaking things up at every opportunity while their opponents laboured to carve out clear chances.

Their suffocating resilience was broken in stoppage time, however, from another set piece. Harry Maguire won a header from a corner and Kane stooped to whip a header in at the far post to make it 2-1.