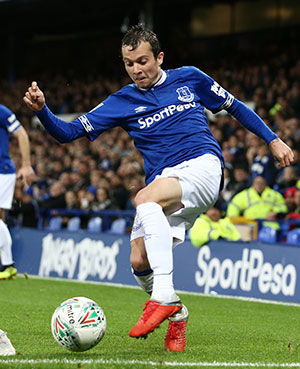 Everton got off to a brilliant start at Leicester with Bernard's trickery setting up a fine finish for Richarlison after just 7 minutes.

Changes from the Fulham game included Bernard getting his first Premier League start, with Richarlison playing as centre-forward and prime goal-getter. No surprises on the bench, with half-a-dozen injured players still missing.

The home side kicked-off all in Blue, against Everton, all in White, with nothing of note in the early exchanges. The first foul was called against Sigurdsson, nothing coming off Maddison's ball in, and there was almost a crucial turnover but The Foxes recovered.

A sloppy miskick by Gana in midfield allowed an advance on Pickford who smothered the ball. Everton started to press better, Bernard was simply brilliant, dancing in from the left and picking out Richarlison for a difficult finish after it came off Schmeichel's fingertips. A fine start for the Whites!

Another fantastic attacking move saw Richarlison drill a fine ball into the danger area where Sigurdsson couldn't quite reach it but won a corner that caused more havoc in the Foxes penalty area; Richarlison's header in was cleared.

Chilwell got forward with pace but Zouma met his cross and Zouma stood firm, followed by Keane blocking a fierce Maddison shot as the home side pressed Everton back, Kenny easily beaten by Chilwell, Vardy's glancing header just flying wide.

More fine trickery, Walcott spinning and clipping a decent shot for Schmeichel to tip over but Digne's corner from the right was tracked well by Schmeichel. More fine movement from Everton but Bernard's smart cutback was behind all the attackers. It was turning into an entertaining game of football with both sides looking to play the ball forward with pace and intent.

Keane had to track a good ball for Vardy over the top and head it away. Walcott got a chance to run forward, Sigurdsson's snapshot finding Schmeichel. Another ball over the top of the Everton defence saw Varrdy only inches offside.

Bernard's trickery was simply phenomenal to watch, something that has really been missing from an Everton player for far too long, but why was Pereira not shown yellow for a blatant and cynical shirt-tug to stop the Brazillian? Walcott ran through again, with a dirty block by Maguire unpunished by Marriner. Armatey was next to play dirty, fouling Bernard from behind and this time seeing the first yellow of the game.

Leicester won a corner that Maddison delivered well enough but it was headed away by a well-positioned Michael Keane. But that ball over the top this time found Vardy with Keane trying to put him off and Pickford doing just enough to see Vardy's shot roll wide.

Richarlison won a corner, swung in well enough by Sigurdsson, but the next was driven far too deep over everyone and out behind. More Bernard trickery saw Sigurdsson's shot deflected wide, the corner almost creating a chance but instead, it became a breakaway and Pereira drove all the way, exchanging passes with Ineacho that fooled Kenny, then dodging his way around the fast-retreating Everton man and showing up Pickford who made a poor effort to stop the seemingly inevitable equalizer.

Richarlison had the beating of Morgan who was forced to foul the Everton star, Digne picking out Zouma but it deflected off Maguire for a corner; as the Foxes again looked to break from the clearance, Davies had to chop down Vardy and take the yellow.

Davies was fouled twice for a promising set-piece in added time, Sigurdsson delivering it well enough but no further chances created. So... Everton should be ahead but they gave away a rather soft goal to let The Foxes back in.

Gana kicked off for Everton, but Zouma put Pickford under pressure. Vardy was again offside for a long ball over the top. Some poor decisions saw possession conceded, and when they did win the ball back, any pace was lacking until Walcott got forward onto a great ball from Gana, winning the first corner of the second half, touched away by Schmeichel under pressure.

Morgan avoided a second yellow despite dumping Richarlison onto the perimeter gravel, as Everton struggled to get any cohesion, a good ball from Davies not sticking with Walcott. Vardy got forward again and centered but thankfully no-one had followed his run. He was again flagged offside as the second goal for the home side seemed ever closer.

A horribly sloppy pass from Davies set up Chilwell for a fine shot that seemed certain to score but somehow flew past the angle... Only a matter of time with Everton now well off the pace needed to give them a much-needed win as Leicester were showing far more initiative. But nothing really from the bench to change this for the paralyzed Everton manager who really needed to do something to change the inevitable happening...

Kenny did well to stall Chillwell and Everton turned the ball over but Richarlison's pass to Sigurdsson was never on and The Foxes resumed their patient probing as the rain started in earnest. Bernard did play a brilliant ball to Walcott whose touch was top class and he turned superbly but the shot was really disappointing. Morgan again took out Richarlison and this time Marriner showed him a second yellow and the red card.

So... 25 mins with a man advantage... Could Everton make them pay? Walcott fouled wide right, as the travelling fans made their presence heard, Sigurdsson singing in outward curler that fooled most of the attackers.

Kenny won Everton another corner from Sigurdsson, with shots from Digne then Davies being repelled by Schmeichel. Silva had been planning on swapping Davies for Schneiderlin, which would have been horrible, but decided instead to bring on Tosun and try to get something more from the game.

Some fine work from Bernard ended with a drop of the shoulder from Sigurdsson and a despairing touch behind by Schmeichel. Everton were now playing the game all in the home side's half but really needed to push their advantage home.

Nothing seemed to be happening until, out of very little, Sigurdsson delivered a £45M goal with a fantastic turn, forward stride and brilliant strike. The 50th Premier League goal of the Icelander's career, and probably the best!

A massive test now for the final 10 minutes: could Everton hold on with all the cards in their favour — and Maddison taken off? Richarlison had had a number of opportunities to create chances in the second half but, each time, he fluffed his lines... tiring perhaps?

Chilwell gifted Everton yet another corner under pressure from Kenny, Sigurdsson putting it right onto Zouma's head, but somehow he directed it over. Tosun lazily fouled Chilwell and could have gotten into trouble. Everton were sloppy again, Waloctt's poor pass to not set up Tosun seeing the Foxes scamper upfield, Vardy wasting the opportunity.

(90+1' Schneiderlin Bernard and Leicester immediately won a corner. Amarty heading it inches wide. Calvert-Lewin came on for Walcott and demonstrated how utterly absent his shooting skills are. The frustration finally got to Chilwell, seeing yellow at the end, as Everton ran out winners on the back of two fine goals from their most expensive stars.