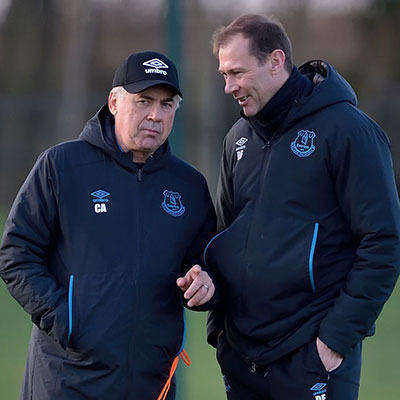 With the hectic Festive programme out the way, Carlo Ancelotti has finally had a full week with the players on the training pitch

Everton turn their focus back to the only remaining business of the 2019-20 season and that is making a concerted push for the top six over the remaining 17 games of the Premier League campaign.

Davies, Bernard & Keane start as very one strives to forget the horrors of last weekend, Carlo Ancelotti promising that this is the first day of anew era at Everton. Mina, Coleman and Schneiderlin drop to the bench.

Brighton kicked off, Dunk getting his first touch early on. Everton tried to pass the ball around but it was a scrappy. Start, Sig with a clumsy tackle, the free.kick causing havoc but Pickford then grasping it out of the air. Some half-decent attacking ended within Walcott running in, getting pulled back by Duffy, and finally the VAR check came but no penalty despite the clear pullback.

Some decent crosses were headed away by Duffy before they reached Calvert-Lewin, who later got into good space but nothing really came of it. More good build-up play ensued but that perennial final ball, this time in from Digne, missed everyone. But at least it was Everton controlling the play. Bernard played in Calvert-Lewin but Ryan was out very quickly to deny him the shot.

Brighton finally mounted a good offensive move Jahanbakhsh shooting high over Pickford's bar. Richarlison could only do the same with a dreadful strike of a great feed from Bernard at the other end. Bernard once again forced a decent ball to Walcott, thanks to a defection off a defender, and Walcott was again impeded as he shot: nothing given.

Everton had heavily, almost leadenly controlled the first quarter of the contest with ominously few real chances created. Calvert-Lewin Got behind again and tried a finish that was way above his pay grade, from an impossible angle the ball missing the far post by mere inches. What a goal that would have been!

Bernard lashed a shot of Dunks chest, with every Evertonian screaming for a penalty that never was. Sidibe then demonstrated why he's not a forward, launching a hopeless shot beyond the goal with at least 3 other players waiting for a meaningful cross.

Richarlison managed to injure himself as seemingly only he can, needing treatment off the sidelines. Walcott got in but passes to a defender; perhaps there was space for a shot?

Richarlison was next to be played in but Matt Ryan fully had the measure of his goal bound attempt. Richardson would then find the back of the net with some fine football, a really good goal by the Brazilian, turning well and firing far beyond Ryan but just inside the post.

A great ball in seemed destined for Keane to finish but the slightest glance from Duffy redirected the ball onto the Everton defenders arm and the chance never came. Holgate accidentally caught someone with a high boot.

After the restart, Holgate got a push In the back but was far too dramatic in his reaction. Calvert-Lewin got bundled over and needed treatment. Trossard got some space to deliver a teasing shot that beat Pickford but not the bar.

Signs and Rich showed some good invention down the left but the cross was easily volley.ed behind. Brighton were seeing more of the ball as they made a double-change, while Ancelotti looked on passively, biding his time, with the crowd less than convinced by this lukewarm 2nd half display.

Bernard did well to play in Calvert-Leon but Ryan pulled off a vital save from a rare almost powerful shot from the Yorkshireman. Ancelotti decided it was time for Delph to come on as Richarlison put in some good moves. At the other end, Holgate had to scoop a cross over Pickford and his goal as Brighton threatened, and Bernard was withdrawn for Fabian Delph. Walcott off for Coleman was the next change by the Italian maestro.

Richarlison got through but Dunk in close attention prevented a meaningful strike for a corner. Keane's header hit the bar then Calvert-Lewis bundled it in over the line with his arm (so says VAR) and an ensuing injury multiplied by a yellow card for his troubles.

Glen Murray forced a fine save from Pickford, with Mina then coming on as Brighton threatened from a corner inside the final 10 minutes, with the Everton defence living on their nerves, Diane the one coming off, to protect an injury.